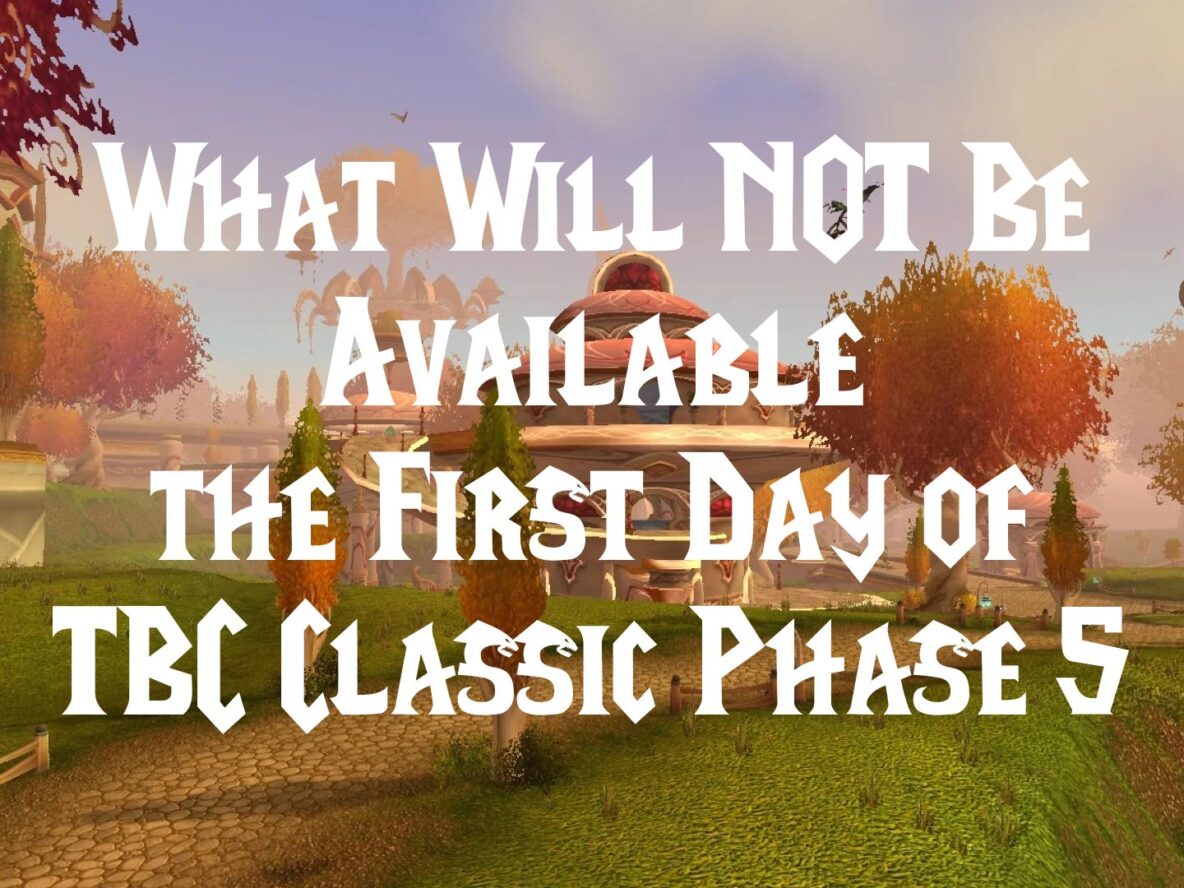 TBC Classic Phase 5 brings new content, vendors, and recipes to the game. Most players are looking forward to one or more of these changes for new or cheaper gear and items. However, much of the new content arriving with Phase 5 will not be available on the first day of release. Because much of the content is locked behind a gated event, the taking of Sun’s Reach. These gates cannot be bypassed in a day, keeping a lot of Phase 5 changes just out of reach for a little bit longer. This guide will go over what will not be available on the first day of Phase 5, and what will be available. 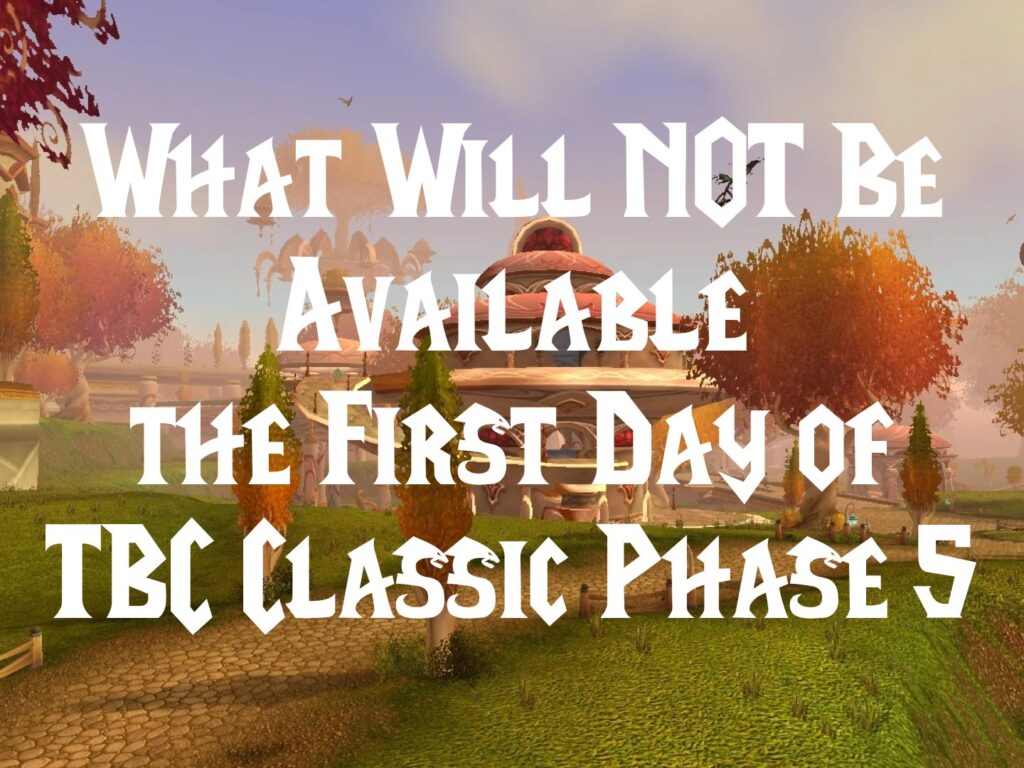 What Will Be Available on the First Day of Phase 5

The new 5-man dungeon will be open and available on day 1. The heroic version is still subject to the one per day limit, but you can spam run the normal version for Shattered Sun Offensive rep (something enchanters and jewelcrafters should look into).

The new SSO faction will be available, as will their quartermaster Eldara Dawnrunner, and all of her wares.

Only three of their new daily quests will be available at the start, so to earn rep quickly you need to spam Magister’s Terrace.

This is an expectation based on the last phase release. Badges of Justice were dropping Karazhan after Phase 4 was released, but before the new raids were open. That said, if you are saving your MH/BT lockout for badges then best to confirm this after Phase 5 launches.

New Guardian’s versions of the PvP spell haste necklaces for casters and healers will be available from your capital city’s PvP vendors. You’ll need 15,300 honor and 5 EotS Marks of Honor. They are a small upgrade from the necklaces offered during Phase 4.

Okay, it doesn’t actually open until Thursday, May 12, 2022. But it is not beholden to any of the gatekeeping going on below. Moreover, Blizzard has stated the boss gatekeeping we saw during the original TBC run will not be present. Guilds will have access to all 6 bosses at the start.

Expect the new recipes out of Sunwell Plateau to start to be available. Someone on your server is likely to get the new hands or rings recipe you want to have made.

More details on what to expect in Sunwell Plateau.

With Sunwell raid available, the new T6 gear vendor (for wrist, waist, and feet tokens) will be available. As will the new vendor who can exchange many non-tier Sunwell epics for one specialization into a different version for a different specialization.

Everything on this list will be available “soon.” But is locked behind the gate system used for the Shattered Sun Offensive’s retaking of Sun’s Reach event. Participation in the latest daily quests will help your server to unlock the next phase of the event and open up more rewards.

Learn more about the Shattered Sun Offensive and various phases of the event.

Initially, there will only be three new daily quests at the launch of Phase 5. Two at the initial stating area on the Isle of Quel’Danas, and one you get directed to in Hellfire Penninsula.

Completing the two daily quests on the isle helps to unlock the sanctum and the next phase, which offers more daily quests. The sanctum quests help unlock the armory, etc. At the end of the event, there will be lots of new daily quests, most of which are on the Isle of Quel’Danas. But it will take time for everything to be unlocked.

The new PvP vendors will spawn after the armory has been taken (end of Phase 2). They will immediately begin selling their goods.

Portal from Shattrath to the Isle of Quel’Danas

The one-way portal from Shattrath to the Isle of Quel’Danas needs to be built first. Until then, you’ll need to port to Ironforge or Silvermoon City and then take a flight to the isle. Don’t worry, the flight time is a lot less than it appears on the map.

At the start of Phase 2 (sanctum has been taken), the daily Intercepting the Mana Cells will be available in Shattrath. Completing it goes toward completing the portal. The portal’s completion is separate from all other event progress.

Smith Hauthaa, the new BoJ vendor, will spawn when the armor has been taken (end of Phase 2), but will not begin selling the new BoJ rewards until we build her a forge. That process begins as soon as she appears.

Complete her daily quest Making Ready to work toward the completion of the forge. It is not tied to any other event progress.

Epic Gems for Badges of Justice

Shaani, the jewelcrafting supplies vendor, will spawn when the harbor has been taken (end of Phase 3). But she won’t begin selling gems until a new alchemy lab has been built. That process begins as soon as she appears.

Complete the daily quest Discovering Your Roots to work toward the alchemy lab. It is not tied to any other event progress.

K’iru’s Song of Victory is a zone-wide buff that increases stamina by 79 and Intellect by 40. It works inside the new dungeon and raid, so priests and mages will no longer need to buff in those instances.

The buff will appear with the naaru K’iru, who spawns once all SSO event goals have been completed.