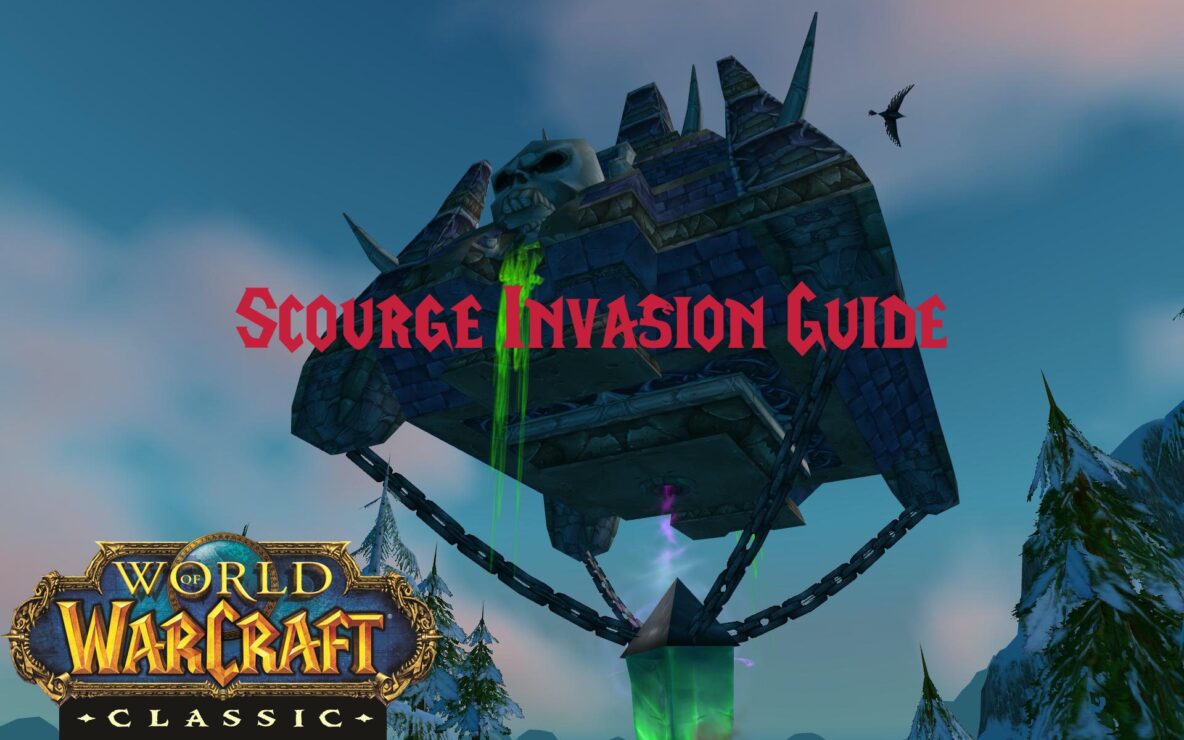 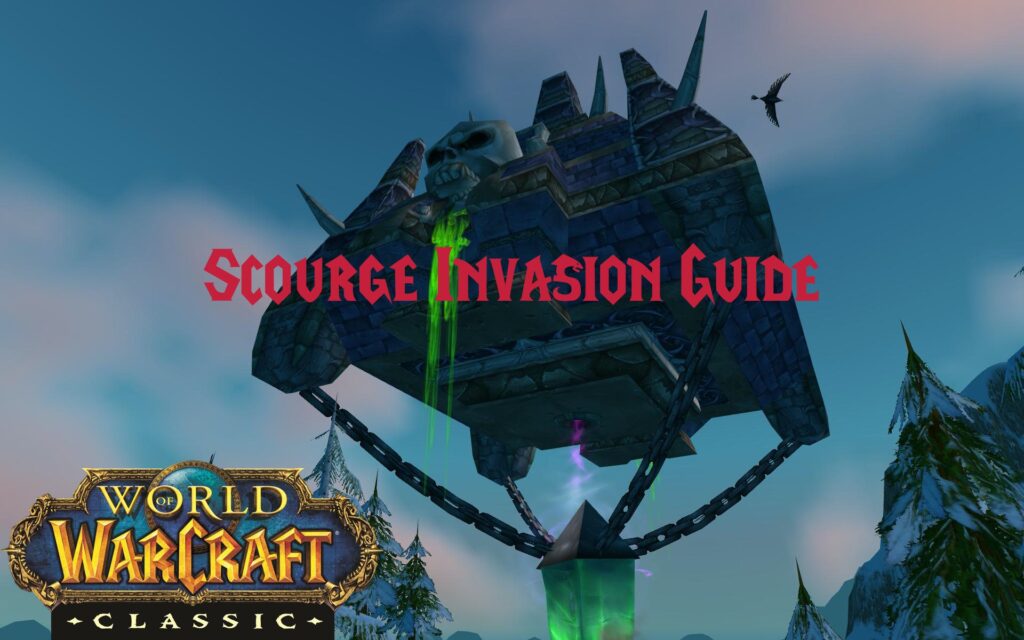 The Scourge Invasion is a limited-time world event, heralding the arrival of Naxxramas. Invasion points will pop up in several higher-level zones, Stormwind and Undercity will come under attack, and new bosses will appear in undead related dungeons. This guide to the Scourge Invasion will go over all the key points of interest. Including rewards only available during this event.

The event centers around the Argent Dawn and is a good opportunity to catch up on your rep. All mobs and quests involved will grant rep at least until Honored, the minimum rep required to enter Naxxramas.

A necropolis will float above Stormwind and Undercity for the duration of the event. Occasionally Scourge mobs will appear in the cities. They are neutral, so will leave low-level players alone so long as you don’t attack. They also leave key NPCs alone, including bankers and vendors.

With the mobs being passive and non-disruptive to city NPCs there is no need for players to deal with them if you don’t wish to. You should pick up the Damaged Necrotic Shard quest. Otherwise, you’ll do better farming Necrotic Runes from the other invasion spots.

Zones under attack will have a purple skull marker on your map in continent view. You can also speak to NPCs near Argent Dawn tents in the major cities for locations and strength of the Scourge forces. 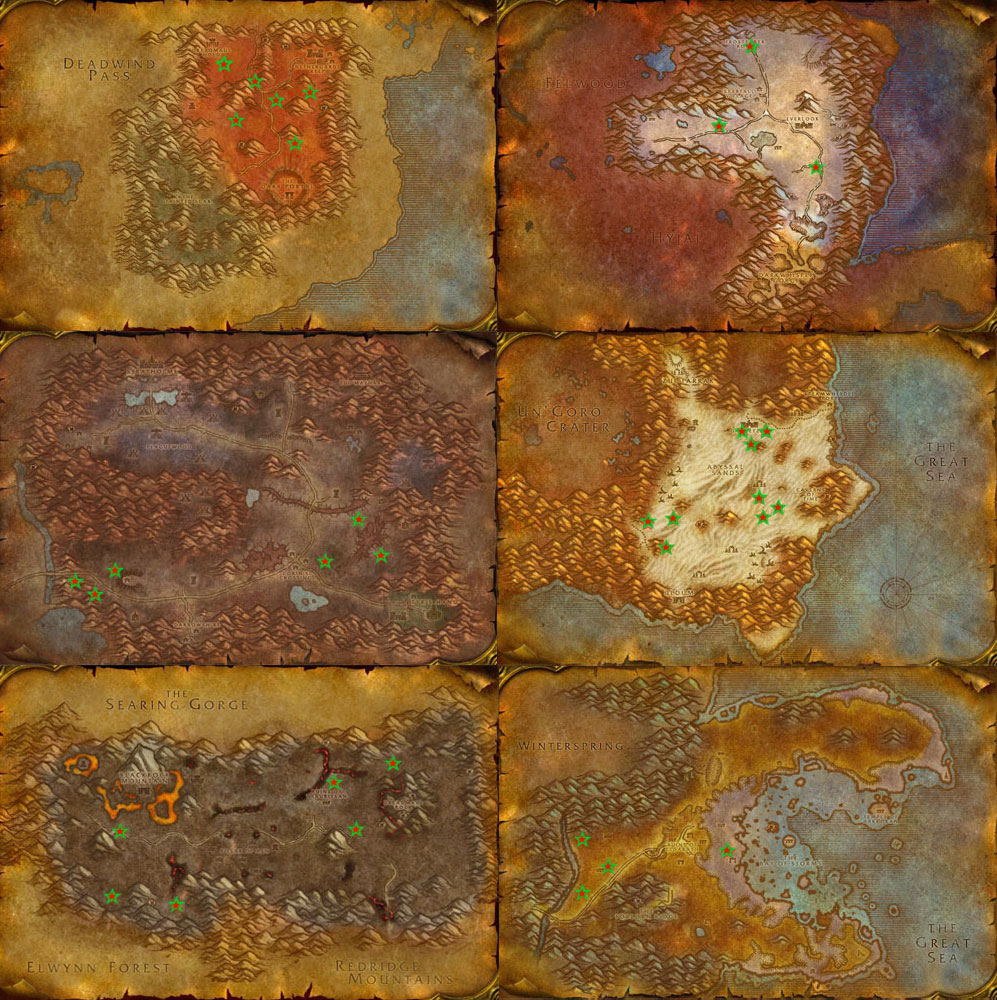 The goal is to knock out the Necrotic Shards on the ground, surrounded by undead. 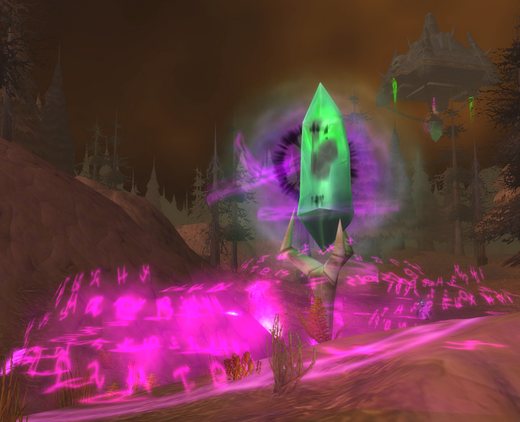 These are the primary goal of most players killing Scourge at the invasion sites. They are the currency used for new quests and items available at Light’s Hope Chapel.

Min/maxing DPS will want the Consecrated Sharpening Stone or Blessed Wizard Oil for Naxxramas. As they are only available during the invasion expect some players to farm the invasion points heavily to stockpile what they can.

Every 15 minutes while the Necrotic Shard is active rare spawns will appear.

They are non-elite, but a bit higher level than the regular undead mobs. They drop 2-3 Necrotic Runes and an Undead Cleansing/Slaying bracer.

Letters from the Scourge

The non-elite undead has a chance to drop a letter item which starts a quest. There are six letters in total, each turned in at Light’s Hope Chapel for a small reward.

A week after turning in a letter you will receive a message through the mail, which mentions an NPC also mentioned in the letter. That NPC will now sell you Freshly-Squeezed Lemonade and Friendship Bread. They are equivalent to other food and drink from vendors. But you will receive a heart animation over your character while consuming them. The vendors will continue to sell you the items after the Scourge Invasion ends.

Most event rewards come from either drop around the necropolis invasions or buying items with Necrotic Runes. For best results consider forming a small party when attacking necropolis invasion points. Ideally with little to no overlap between cloth, leather, mail, and plate wearers.

Undead Cleansing and Undead Slaying armor sets are awarded only during this event. Each piece offers significantly increased damage against undead. With a 3-piece bonus of 2% damage increase to the undead. Along with some available consumables, you can stack a scary amount of offensive stats against undead mobs.

Keep in mind you may be giving up a lot of other stats and set bonuses to wear these pieces. DPS casters can get the most out of these pieces, depending on their other gear options. The trick is to maintain the spell hit cap using different slots. Melee and hunters will likely find these items are a DPS decrease. Newer characters may benefit more if they are looking to get into Naxx, but they don’t mean you stop gearing up through more traditional means. Check with your local theory crafter before committing to the time involved.

Chest pieces drop from Shadow of Doom when destroying an invasion point.

Bracers drop from the rare spawns around an invasion point: Bone Witch, Lumbering Horror, and Spirit of the Damned.

Gloves are awarded from an Argent Dawn questline.

You can exchange 8 Necrotic Runes for an anti-undead sharpening stone or wizard oil. Note you need to complete Under the Shadow first, which requires its own 10 Necrotic Runes.

Marks of the Dawn

After a certain number of zones have been cleared of invasion points and necropolis a new NPC will spawn at Light’s Hope Chapel. They will offer players various Marks of the Dawn for free.

Lesser Mark of the Dawn

Mark of the Dawn

Greater Mark of the Dawn

Tabard of the Argent Dawn

You can exchange 10 extra Necrotic Runes a Tabard of the Argent Dawn. No stats, but a unique design you won’t see again until the pre-Wrath of the Lich King event. Note you need to complete Under the Shadow first, which requires its own 10 Necrotic Runes.

You can also turn in 15 Necrotic Runes for a Major Healing Potion or a Major Mana Potion. But you’re probably better off stocking up on the special wizard oil and sharpening stones.

While the Scourge Invasion is active (December 3-31, regardless of invasion battle status) new bosses will be available in undead-related dungeons. You can easily spot them by their glowing purple aura, similar to the invading Scourge in the open world. These new bosses drop new, level-appropriate blue items (up to level 57). Nothing active raiders will get excited about. 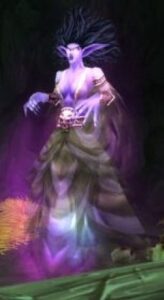 When Does the Scourge Invasion Begin and End?

The Scourge Invasion ends after a set number of zones have been cleared, plus one week. Blizzard announced they had increased the number of zones that must be cleared at each stage, and they added an extra week to invasion spawns on top of that.

By the numbers, Blizzard gave in the announcement they expect invasion spawns to now last for around 15 days (December 18th) on the busiest servers. But it still depends on how many players you have on each server participating.

What You Should Prioritize

When it comes to spending your Necrotic Runes it’ll depend on your character’s current progression.

Raid mains (with the possible exception of DPS priests and warlocks) should skip the armor set unless you simply want to add it to your collection. Your raid epics will be better, even against the undead of Naxxramas. Instead, focus on stockpiling the wizard oil and sharpening stones. Those offer a DPS increase for almost every class in Naxx.

You may also want to spend 10 Necrotic Runes on the Tabard of the Argent Dawn. It is a good looking and unique design until WotLK Classic gets announced.

Dungeon bosses can wait until after you’re done collecting items from the invasion points. They will stick around through December 31st on all servers.