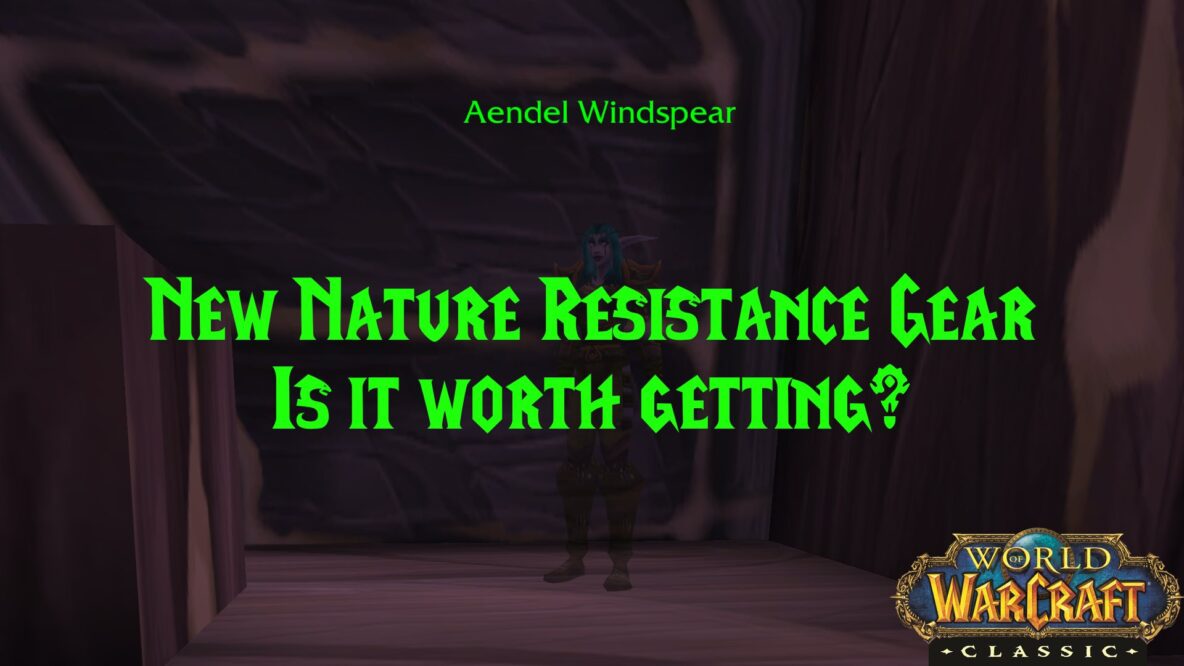 On Tuesday, November 2, 2020, Blizzard added the WoW 1.11 nature resistance gear into WoW Classic. These items were originally a part of vanilla WoW patch 1.11, which was also the release of Naxxramas. Blizzard had stated earlier they may release the items ahead of Phase 6, which is coming on December 1. And so here they are. But is the nature resistance catchup gear worth getting at this point in Classic? 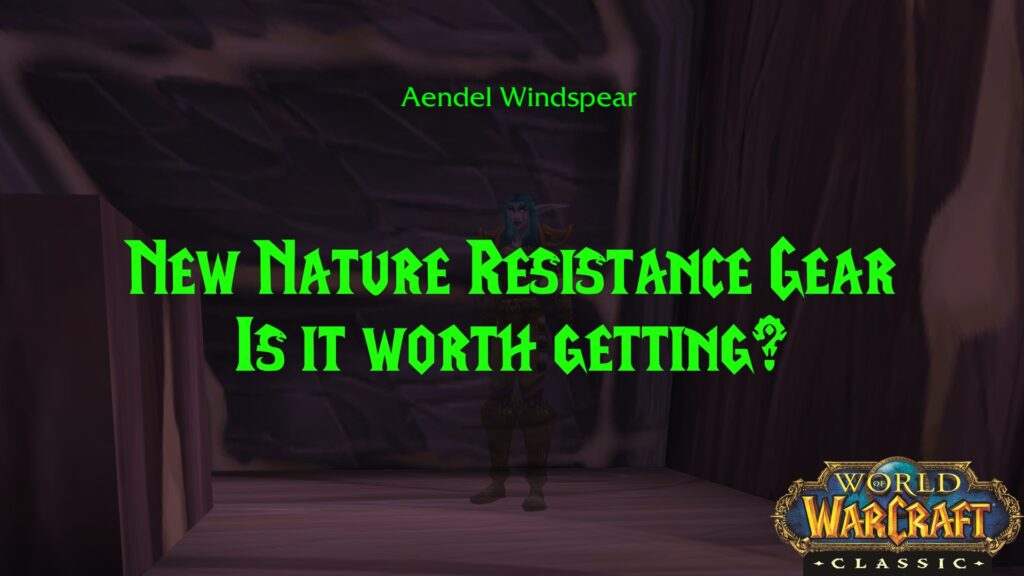 In vanilla WoW there items were release as a soft nerf to AQ40. Today many players may not see the need to add nature resistance gear or soft nerf AQ40. But keep in mind the opening of the gates happened much later for vanilla servers than it did on many Classic servers. The first C’thun kills also took longer, requiring bug fixes and nerfs. In Classic, nearly 50% of guilds that killed the first AQ40 boss also killed C’thun in the first 10 days.

Even with AQ40 being easier in Classic some players and guilds could enjoy this new gear. New players are still joining the game. And some guilds still struggle with some bosses in AQ40. Not to mention servers who had to wait months longer for AQ raids to be available.

Most nature resistance gear is worn during the Princess Huhuran fight. Melee and hunters act as soakers for the poison volleys that go out. It was pretty easy to put together a 150+ nature resistance set using older cloth and leather pieces. The new Bramblewood armor offers more total resistance and health for survivability.

The Bramblewood Helm fills a slot missing nature resistance before. You will lose DPS for the swap, but it is a straight-up increase to your nature resistance. Even more, if you add a Savage Guard to this piece.

If you want better survivability it is an easy, though expensive addition. You may also be able to min/max better by exchanging this for other pieces, keeping your survivability the same but increasing your DPS. With a Savage Guard, you could swap out your nature resistance neck, gloves, and a trinket for DPS pieces.

The Bramblewood Belt can replace the often worn cloth belt from Maraudon. You lose a bit of nature resistance but get some much-needed health. Overall a good trade, and at the lowest cost of any of the new leather pieces.

The Bramblewood Boots are the worst value of the set. They give a bit more nature resistance and some health. But cost twice as much as the belt. If you have enchants on your current nature resistance boots that is even more costly. These are really only for those trying to maximize their survivability.

Tanks on the Princess Huhuran fight will want to keep their regular mitigation gear. The defense and nature resistance on the Ironvine set is not worth getting out of your epics.

DPS warriors and paladins will need to consider whether these new plate items are better than their current non-plate resistance gear. Overall the set isn’t as much of an improvement as the leather and cloth sets.

If you already used Sandstalker then Ironvine is way more expensive for very little added survivability. Even without a dedicated chest piece your Tier 2 offers decent resistance. This piece is worth looking at if you die more often than not during the fights. But otherwise isn’t good value over other options you already have.

Again the Ironvine is nearly identical to the Sandstalker option you may already have. At least with the gloves, the crafting cost is roughly the same. It isn’t worth going from Sandstalker to Ironvine, but a not too expensive way to add survivability if you’re using a weaker option.

If you followed my nature resistance gearing advance during your AQ40 prep you aren’t wearing a belt piece. In which case the Ironvine Belt offers increased total resistance if so desired, and is cheaper to craft than the new leather belt. Some days it is good to be a plate wearer.

Casters and healers have the most to gain from the new catchup gear, but also the least need to do so. Before it was hard enough to get 100 nature resistance from available gear. But with melee and hunters acting as soakers and surviving there is no need for casters and healers to suit up. And keeping their DPS and healing up helps everyone get through the fight.

Still, Blizzard added new cloth armor with the Sylvan set. So if you wear cloth and really want a nature resistance set you should start with these pieces.

There are a new resistance cloak and ring for everyone. The cloak is crafted like the other armor pieces. But the ring comes from a quest requiring Cenarion Circle rep.

You give up health for nature resistance. When looking at crafting costs also keep Enchant Cloak – Greater Nature Resistance in mind. If you have it on your old cloak you’ll want it on a new one.

Given the total cost, you’re getting more into the min/max mindset to justify the cost of upgrading your current cloak. 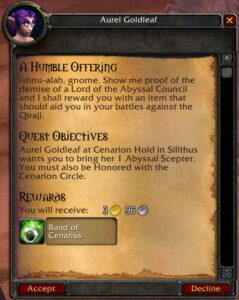 You must complete the quest A Humble Offering, which required you to be Honored with Cenarion Circle. If you raid regularly that rep shouldn’t be a problem. The quest is simple, just turn in an Abyssal Scepter. Those drop from the Twilight Lords you can summon around Silithus. And ironically require Revered with CC rep to get the summoning materials. If you don’t want to work your way up to summoning a lord you can always buy your way in. The scepters are tradable and often found on the auction house.

If you don’t have two nature resistance rings this is a survivability upgrade. If you do have rings this gives more health, which is nice. But maybe isn’t worth the cost in time or gold to secure a scepter.

These are obtained by turning in one of three older arcanum to Zanza the Restless in Zul’Gurub. The same NPC you turn in a voodoo doll and idol for your class head and leg enchants.

Each arcanum is BoP, so you will need to complete the steps to create them yourself. Which you should go for will depend on the cost of the related book on your server. As well as your class and playstyle.

Arcanum of Focus – The most difficult of the three options. The Skin of Shadow from Scholomance is no longer a guaranteed drop in Phase 5, and you need two.

Arcanum of Rapidity – This is the option I went for. As a rogue, I could collect Blood of Heroes and vanish. Worst case you can just take your two deaths and be done with it.

Arcanum of Protection – The Frayed Abomination Stitching has a decent drop rate in undead Strat, not a lot of competition, and you only need the one. Good if you prefer group content to die alone over Blood of Heroes.

As you can see there’s some effort and cost involved with getting one or two Savage Guard. If you have the time and inclination it is an easy way to increase your nature resistance without having to rebalance your gear set. It may even free up a slot or two for DPS items.

So Is All This New Gear Worth It?

Are you clearing Princess Huhuran without trouble and without usually dying? How about the trash mobs that follow when they use thunderclap?

If clearing and surviving is not currently a problem then you don’t need any of this new gear. Adding it could increase your DPS time on thunder clapping trash. Or allow you to optimize your resistance set for more DPS. But if you’re more concerned with covering your Naxx raiding costs I wouldn’t worry about it.

If you’re dying as often as not then added survivability can help. These new pieces offer both resistance and health, so are more effective than other options.

New players/characters can build their nature resistance set faster starting with these pieces. But you’ll need to still take time or resources to gather the needed materials. It may not end up being faster than running Maraudon. But you can at least solo farm gold. With these items are a starting point you can also be less picky over what other pieces do drop for you.

I already had materials saved up for these items. My guild downs Princess Huhuran easily and I usually survive. But I’m still planning to get the new items crafted for my set. I think it’ll help with the trash after Huhuran, allowing me to stay in and DPS for longer. The same idea behind my fire resistance set for Firemaw.

With Mark of the Wild, I’ll be up to 306 nature resistance. With 315 being the cap. My total health should also go up a bit.

If I get grouped with a hunter then I’ll go over with the nature resistance aura. That will allow me to swap out the neck, bow, and one of the trinkets for DPS pieces and still be at the 315 cap.

This is all overkill for AQ40. But it is something to play with while we wait for Phase 6 to arrive.