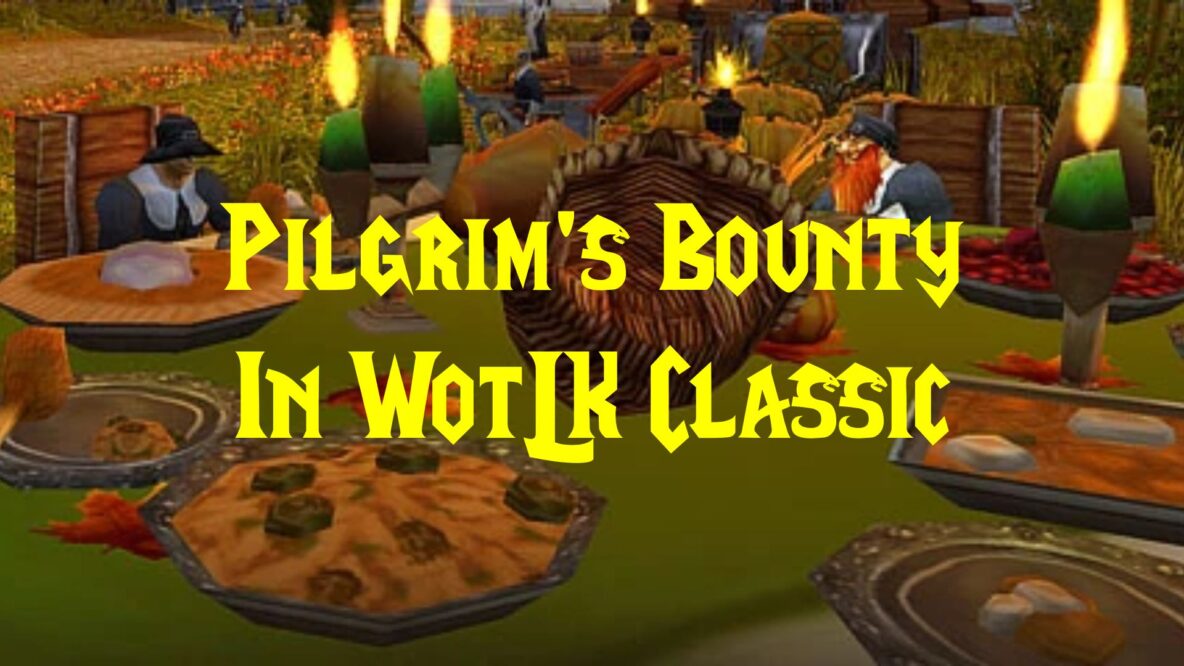 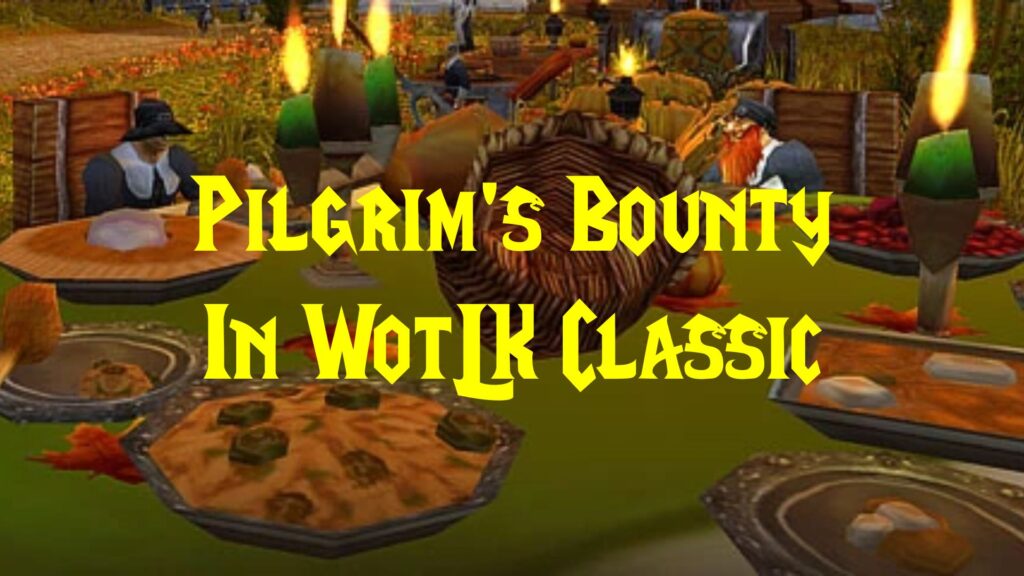 Pilgrim’s Bounty in WotLK Classic is an in-game holiday event running from November 22 through November 28, 2022. Rewards for participating include a turkey pet, new cooking recipes, and a buff to reputation gains for the week. This holiday is not a part of the What A Long, Strange Trip It’s Been meta-achievement. This guide will go over the basics of Pilgrim’s Bounty in WotLK Classic and give you all the details you need to make the most of the world event.

The Pilgrim’s Bounty world event in WotLK Classic does have its meta-achievement: Pilgrim. This rewards you with a Turkey Cage and the title “the Pilgrim.” But again, the Pilgrim achievement is not a requirement of the What A Long, Strange Trip It’s Been.

I recommend going through the required achievements in the order I list them below. It will minimize your efforts, as several achievements cross over with one another.

A Pilgrim’s Bounty table in WotLK Classic, located outside all major Alliance and Horde cities

Acquire the Spirit of Sharing from a complete Bountiful Table feast at every Alliance capital.

The Spirit of Sharing buff grants +10% to reputation gains for 1 hour.

You need to eat five of each of the five foods at a table. Then repeat this at every major city for your faction. If you are solo at a table you can just swap chairs, eat, and repeat. If others are at the table you’ll need to pass food to each other.

You will also need to visit the other major cities to complete Now We’re Cookin’ and Pilgrim’s Progress, so look at doing all of them at the same time to save yourself some trips.

Pass one of every dish at a Bountiful Table.

You’ll need to have other players sitting at the table with you to pass them dishes. Get this achievement done during the first day or two, otherwise, you may find yourself alone in the holiday area.

Bounce food off a fellow feaster’s head at a Bountiful Table.

Again, get this achievement done early while plenty of other players are in the area doing their achievements.

Sit at a table with someone else. Target the other player and throw the food. After a few tosses, you’ll get the achievement.

You need to kill 40 wild turkeys in a chain, with no more than 30 seconds between any two kills. Each kill gives you a stacking buff that lasts for 30 seconds. The achievement is earned when the buff stacks to 40. Each turkey kill will refresh the buff. Lose the buff and you’ll need to start over.

You can find wild turkeys in Elwynn Forest and Tirisfal Glades. They are all over those two zones, so be sure to move further away from the nearby city to avoid other players. If you’re on a single-faction realm then consider heading to the enemy faction’s zone to reduce your competition further. 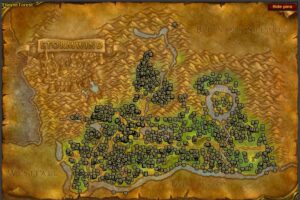 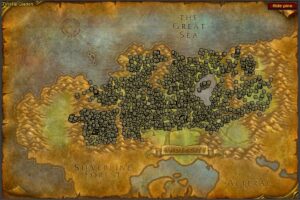 Tracker Snacks may be of use to non-hunters.

This requires Cooking 280+, but you can also use these recipes to skill up cooking from 1 to 355.

Buy the Bountiful Cookbook from Pilgrim’s Bounty vendor. This will contain all the necessary recipes. Each recipe requires ingredients only available in the Pilgrim’s Bounty section of each major city.

Make 40 of each recipe and give 20 of them to the corresponding daily quest giver:

Save the other 20 of each food for the next day so you can stock up on Turkey Shooters for Turkey Lurkey.

Each daily quest will offer you several holiday-related items as rewards. On your first day pick up these rewards:

On the second day pick up five more Turkey Shooters.

Defeat Talon King Ikiss while wearing a Pilgrim’s Hat and either a Pilgrim’s Dress, Robe, or Attire.

The hat and chest items you should have gotten while completing Pilgrim’s Progress above.

Talon King Ikiss is in the Sethekk Halls dungeon in Outland. The achievement can be completed in normal mode. That means the mobs are level 67-68 so many level 80s will be able to solo the run. Worst case you’ll need to find one or two people to join you. I recommend looking for groups early, as interest will die off after the first few days.

While wearing either a Pilgrim’s Dress, Robe, or Attire, take a seat at each enemy capital’s Bountiful Table.

You should have gotten a chest item while completing Pilgrim’s Progress above.

Once you have the needed item go to the enemy capital cities to sit and complete the achievement.

Blast those dirty, sneaking Rogues with your Turkey Shooter.

You can get a Turkey Shooter from any of the holiday daily quests you completed earlier by turning in food. It turns your target into a turkey. But note that each Turkey Shooter only has one charger, so you will need a minimum of eight to complete this achievement. I recommend getting three Turkey Shooters on your first day (in addition to the hat and chest pieces needed for other achievements). And then repeat the daily quest the next day and get five more Turkey Shooters.

Head to Dalaran and go rogue hunting. You’ll need to get one rogue of each race of these races:

You can shoot mounted targets, but if they are moving they’ll likely get out of range during the 3-second cast time.

If you’re on a realm with few members of the enemy faction or you are otherwise having trouble finding a particular rogue/race combo:

Once done with the achievement you can use any remaining Turkey Shooters on anyone else you like. Try shooting a hunter and then having them feign death.

Skill Up Cooking During Pilgrim’s Bounty In WotLK Classic

The Pilgrim’s Bounty world event in WotLK Classic is the single best time to skill up cooking. You can go from 1 to 355 using the cheapest recipes available. The whole affair will cost you less than 20 gold, though you will need to spend time hunting wild turkeys.

You will automatically complete the achievement Now We’re Cookin’ and will have more than enough cooked items to complete Pilgrim’s Progress. You should save any remaining food to create Bountiful Feasts. 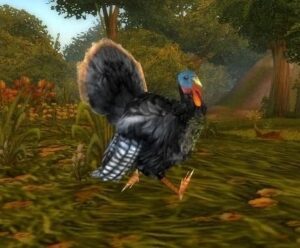 There are several perks to participating in Pilgrim’s Bounty in WotLK Classic, though none of them is game-breaking.

Pet & Recipes for Other Achievements

Completing the Pilgrim achievement will reward you with a pet and you’ll have learned five new cooking recipes in the process. These will count toward Shop Smart, Shop Pet…Smart, Lil’ Game Hunter, and Chef de Cuisine.

The Spirit of Sharing buff grants you a 10% bonus toward reputation gains. The buff is easy to get, just each five of each food at a bounty table outside any of your faction’s major cities. The buff lasts for an hour, so easy to get and use while running heroic dungeons with a faction tabard. 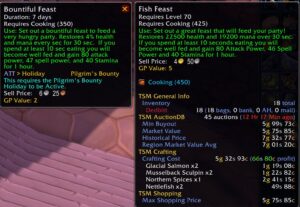 Cranberry Chutney and Bountiful Feast both give 47 spell power when eaten. That is 1 spell power more than the best spell power food or Fish Feast normally available in Northrend.

While 1 whole spell power doesn’t mean much the bigger advantage is both of these holiday foods are super cheap to make. On my server (Pagle-Alliance) a Fish Feast costs 5-6 gold. A Bountiful Feast will cost 3.25 silver (plus a quick wild turkey hunt). Every raiding guild should be using Bountiful Feast during the holiday event. The food only lasts for 7 days, but we may be able to make some on the last day and have it last for one more raid lockout.