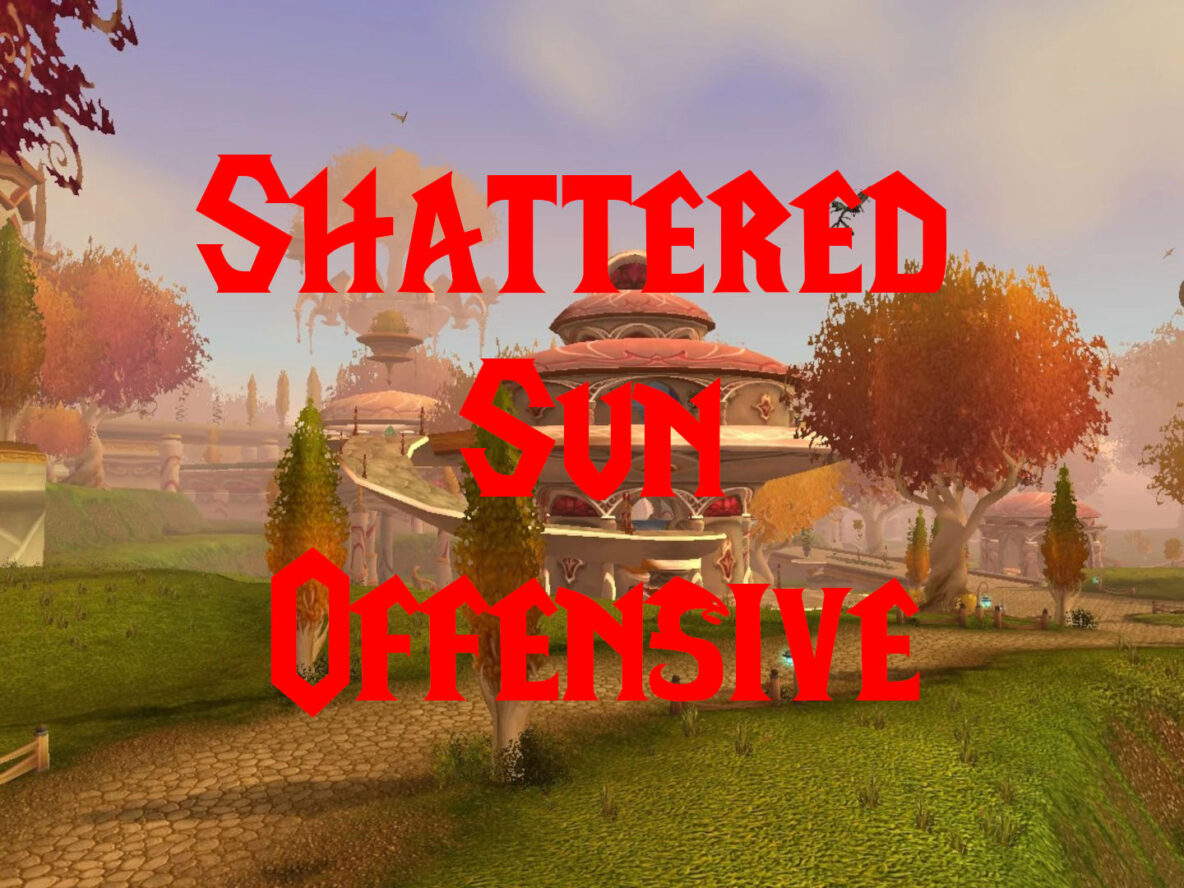 The Shattered Sun Offensive (SSO) is both a new faction and event arriving in TBC Classic Phase 5. The SSO is an army of the Aldor and Scryers put together by the naaru to stop Kael’thas Sunstrider’s attempt to summon Kil’jaeden using the Sunwell. Most of the SSO’s activities center around the new zone, Isle of Quel’Danas. Through the SSO, players will help unlock new daily quests, vendors, and a zone-wide buff. This Shattered Sun Offensive guide will go over the phases and rewards you’ll experience during the initial weeks of Phase 5’s release. 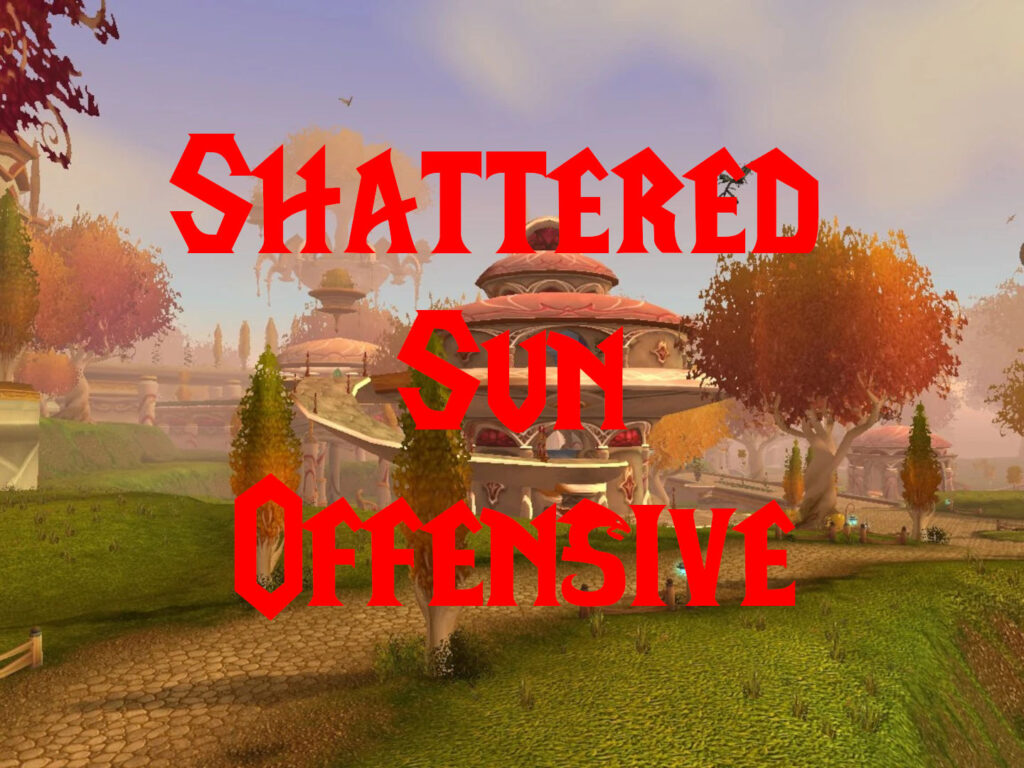 Getting to the Isle of Quel’Danas

Everything with the Shattered Sun Offensive begins on the Isle of Quel’Danas, a new zone located at the very northern end of Eastern Kingdoms. You may remember there being a portal between Shattrath and the Isle of Quel’Danas, and there will be one eventually. But at the start of Phase 5, there will be no portal. You also can’t ride/run/swim there from other zones due to an invisible barrier. 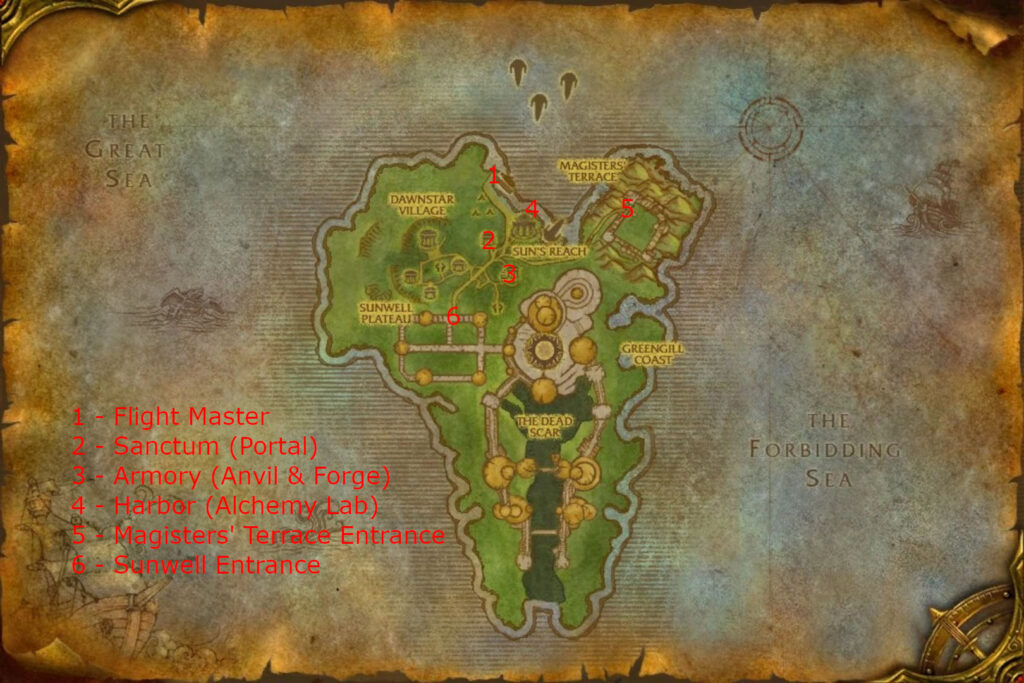 Map of important locations on the Isle of Quel’Danas

Progression with the Shattered Sun Offensive is twofold. There is the usual reputation each individual character must earn to unlock some quests and, more importantly, rewards. But with the SSO there is also a server-wide progression for the event, based on time and the number of specific daily quests which have been completed. 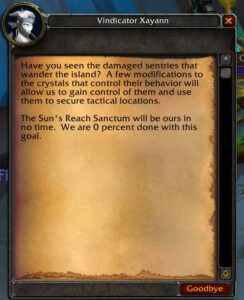 You can speak to daily quest givers to get a percentage report on the progress toward the current objective.

The event will unfold in four major phases, each one unlocking new quests and vendors for players. Large servers should expect this to happen quickly, with each phase lasting perhaps only a few days. When a new phase begins the old daily quests are replaced with identical quests with different names, so you may continue to do them for rep and gold rewards. 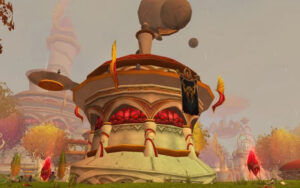 The SSO’s first goal is to take the Sun’s Reach Sanctum. Before this is completed there will be few friendly NPCs on the Isle of Quel’Danas. 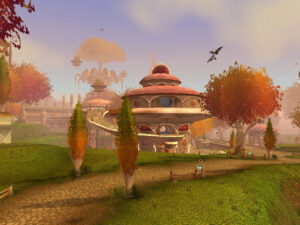 The next goal is to take the Sun’s Reach Armory. There is also a secondary objective that is not directly tied to the status of the armory.

When Phase 2 and the taking of the armory begins you will also be directed back to Shattrath to help open a portal between there and the Isle of Quel’Danas. This goal may be completed before or after Phase 2a is completed, as it is on its own quest completion count. 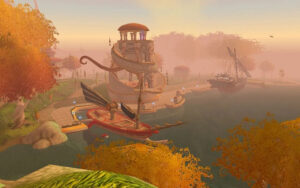 The Sun’s Reach Harbor is the final location to be taken by the SSO. As in the last phase, there is a secondary objective not directly tied to the progress of the harbor.

Note that all Badge of Justice vendors are now spawned, but only the PvP vendor is active at this time. The other vendors will become active when Phase 3b and 4a are completed. 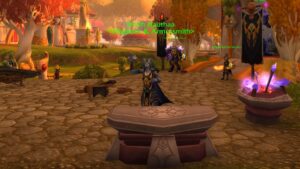 When Phase 3 and the retaking of the harbor begins you will also be tasked with helping to build the anvil and forge back in the armory. This goal may be completed before or after Phase 3a is completed, as it is on its own quest completion count.

Phase 4 has two separate objectives which begin at the same time but complete separately. However, both must be completed before the event is done and the final reward is given.

An alchemy lab must be built at the harbor.

Phase 4b – Monument to the Fallen 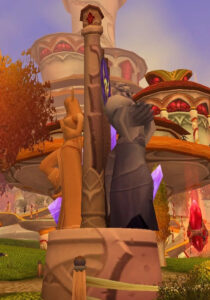 Monument to the Fallen, one of the Shattered Sun Offensive’s last objectives

Players are asked to help fund a monument to the fallen. 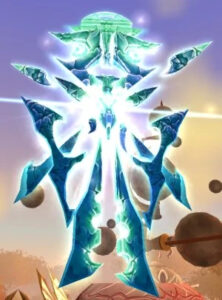 Once all objectives have been completed the naaru K’iru will spawn on the Isle of Quel’Danas. This will provide players on the isle, in Magisters’ Terrace, and the Sunwell Plateau will a zone-wide buff.

This macro will give you a one-click button to use all quest items associated with SSO daily quests.

Four Shattered Sun Offensive daily quests award Shattered Sun Supplies. This bag contains a random uncommon armor or weapon. It also has a chance to give you a Badge of Justice.

All four quests are in Outland, not the Isle of Quel’Danas. Blast the Gateway and Sunfury Attack Plans have no effect on the SSO effort or goals.

Blast the Gateway is an especially annoying quest. You summon a fire pet and feed it by killing nearby fire elementals. You’ll need to do this 8 times before it is ready to use on the gateway.

There are two primary ways of earning reputation with the Shattered Sun Offensive: Magisters’ Terrace and daily quests. There are no rep gains from Sunwell Plateau.

Both the normal and heroic versions of the new 5-man dungeon will provide you with SSO rep.

The heroic version can only be run once a day, so if you plan on dungeon spamming for rep it will be in the normal version. Dungeon spamming with a dedicated group will be the fastest way to earn SSO rep.

The new daily quests associated with the SSO event (and the permanent daily quests that replace them once each phase is completed) are the second fastest way to earn SSO rep. Doing all available daily quests (not possible until Phase 4 is underway or completed) it’ll take you ~10 days to reach Exalted from daily quests alone.

The Shattered Sun Offensive’s quartermaster, Eldara Dawnrunner, is available in the Shattered Sun Staging Area on the Isle of Quel’Danas at the very beginning of the SSO event. You’ll be able to buy from her during any stage of the event, provided your personal reputation is high enough. 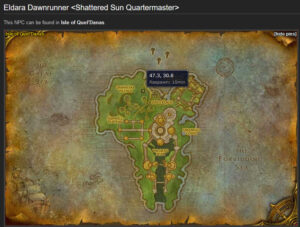 Each necklace offers various stats plus the chance to proc a special ability, depending on whether you are aligned with the Aldor or the Scryers. Note you must be Exalted with your faction for the proc to function.

Aldor procs Light’s Wrath, a buff that increases your spell damage and healing up to 120 for 10 seconds.

Scyers procs an Arcane Bolt which does 333-367 base damage, but is able to crit and is affected by your spell hit and spell crit (but not spell damage). It has a huge range, which is important to note.

In original TBC both procs could go off for a large number of actions, including:

The eating/drinking was annoying for both Aldor and Scryers, as you could lose out on buff food. The Scryers proc was really problematic if it goes off during CCing (hits your CCed target). With its huge range, it can also pull something you are targeting but not in combat with. Comments were made where someone targeted a boss at the far end of an uncleared room, drank which caused a proc, and then wiped the raid.

We’ll have to wait to see if Blizzard leaves them as they were or makes some changes.

The weapons are ilvl 115 rares and two ilvl 115 epic shields. They are equivalent to other reputation rewards, normal dungeons (including Magister’s Terrace), and various group quests.

Lots of recipes (both new and old) are sold by several SSO NPCs, including the quartermaster and specialists tied in with the SSO event. For a complete list see my TBC Classic Phase 5 Recipes guide.

The rations are just as good as Conjured Mana Biscuits from a mage table. Much more expensive, but no mage and clickers are required.