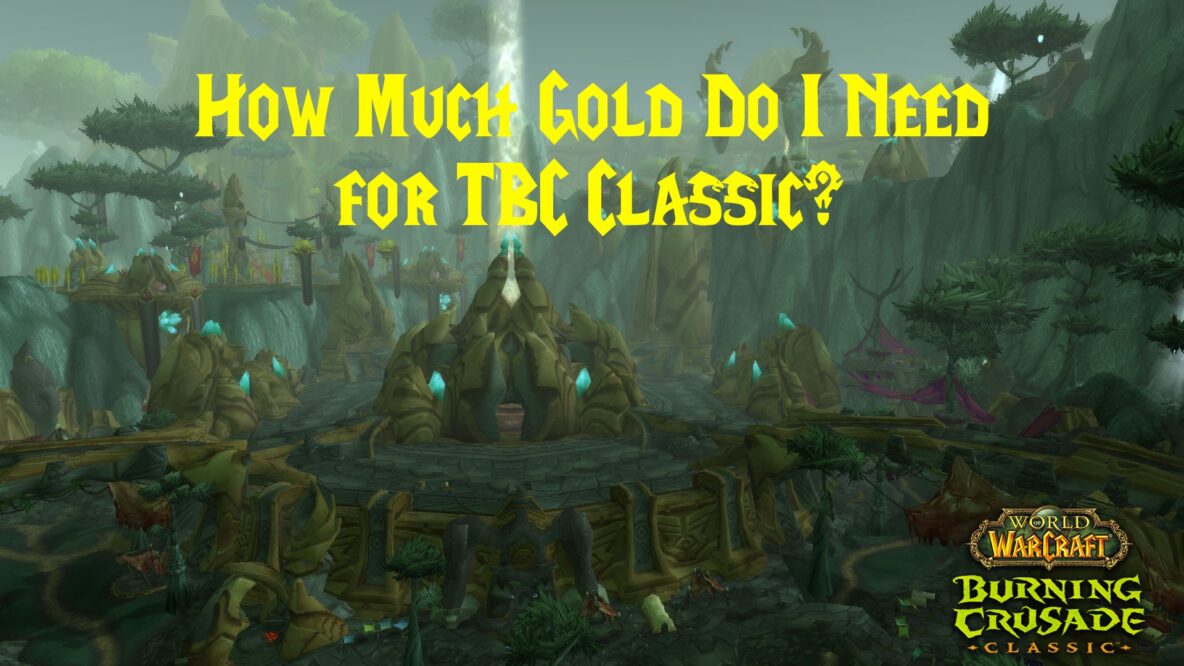 With TBC Classic around the corner, many are asking how much gold do I need for the new expansion and content. The good news is you almost certainly have enough gold to get into raiding and/or arenas, so long as you aren’t with a really hardcore guild or team. And that Outland itself will help make up for any gold shortages you may have now coming out of WoW Classic.

All costs listed in this post are before any possible faction discounts.

Do I Have Enough Gold?

There are a lot of demands for gold during Phase 1 of TBC Classic. Arguably that is when having gold will be best for your endgame progression. Only a few are absolute, must-have purchases. The rest are nice to have items that will improve your quality of life and in-game performance. But missing them won’t lock you out of enjoying endgame content.

What New Characters Need To Get Through Leveling

Everything Else Is a Want, Not a Need

Yes, we all want an epic flying mount and pre-raid BiS. But unless you are in a guild requiring those on the first day of raiding (in which case you should be the type of player who is already prepared) those are not required to get into Burning Crusade Classic Phase 1 raiding.

A flying mount is required to access some endgame content in Outland. A regular flying mount will do. The skill training costs 800 gold and the mount itself costs 100 gold. If you go in with little savings this shouldn’t be a problem by the time you reach level 70. As long as you save gold earned along the way.

Druids can initially skip this expense, as their normal flight form training provides the same functions and costs 100x less. But druid swift flight form requires the druid to learn both regular and epic flight training. So if you want swift flight form later you will eventually need to pay for the 800 gold training.

Normal flying mounts are only good at getting you into otherwise restricted endgame areas. The mount runs and flys at 60% speed, the same as a normal ground mount. For most travel, you’ll still make use of flight points and your epic ground mount. 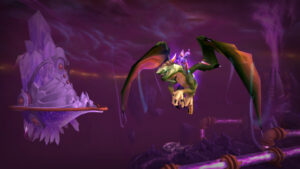 Training costs a whopping 5,000 gold, and you needed to have bought the 800 gold skill above first. The mounts themselves cost 200 gold. If you plan to pick up epic flying as soon as you hit level 70 you’ll spend a total of 6,000 gold for all training and one epic flying mount.

Epic flying mounts fly at 280% speed and run at 100% speed. You’ll find flying yourself will be faster in many cases, as you can take a more direct route. It is the only mount you’ll need in Outland, though you’ll want to keep your epic ground mount handy should you return to Azeroth.

If you want to level up your profession quickly you’ll need to spend gold. How much will be determined by your server and faction, but in all cases expect prices to be very high during the opening days of the expansion. The supply of mats will be low at first, driving up prices. Plenty of players have significant gold savings, not to mention those who buy gold and will throw it at what they want in ridiculous amounts.

Gather yourself or be patient

If you have a matching gathering profession on the same toon or a level 60 alt that’ll help. But the low supply and high prices will drive many to farm mats, so again expect more scarcity in the early part of the expansion.

If you do not have a significant gold reserve you may want to wait. Prices will come down over time, though no one can tell you how much and by when. At the very least hold off on your professions until level 70. You’ll earn a significant amount of gold leveling in Outland, and more working on raid attunement and other endgame content. Meanwhile, you’ll give the market time to cool down.

Invest in yourself for profit

On the other hand, if you have enough gold to power through the right crafting professions then there is an opportunity to make a profit in the early days of Phase 1. Alchemy transmutes, blacksmithing BoE weapons, and tailoring transmutes will be in demand. Not to mention alchemy consumables and jewelcrafting gems. The first players with the desired skill and recipes will make good money during the first couple of weeks guilds start raiding. Prices will fall, suddenly and dramatics as the supply/demand curve reverses. But with the right timing, an initial investment could more than pay for itself. And leave you with one less expense to worry about.

Get a head start with cheaper WoW Classic mats

You can get a head start on 300+ skill-ups using old-world mats for some professions. Check out this TBC Classic professions guide and see if they have an old-world option for your professions. In most cases, the effort is less efficient, but Azeroth mats today are much cheaper than Outland mats will be later.

Tied to professions, some of your better pre-raid gear options will come from crafting. I prefer crafted options over dungeons drops, even if they are slightly weaker. One less fight with RNG.

Moroes and friends in Karazhan

BoE gear will start out expensive, as initial supply will be low but demand high. This will be especially true for BoEs made with blacksmithing or tailoring.

Tailoring BoP pieces by far gets the worst of it, as their best items are limited by long cooldowns. If transmuted cloth prices are really high I would advise selling your initial few pieces rather than saving them for yourself. If you can get by entering Karazhan with lower-level pieces you’ll be able to take advantage of tailoring’s most profitable moment in TBC Classic. Maybe make enough gold to not worry about the rest of the expansion.

Other crafted BoP pieces will vary in cost. If you gather your own mats you can exchange time for gold saved. Otherwise expect to either pay a lot for the mats or be patient and wait for prices to come down. Check Tier 4 raid upgrades and see what pieces will be easily replaced in Karazhan. Those should be your lower priority, at least until the cost is manageable.

You need a place to keep your new stuff. Especially if you’ll be playing the same main character you ran throughout WoW Classic. Storage space is a major quality of life upgrade. Saving you time and stress.

Bigger bags on your character mean less downtime while leveling or farming. Any bag upgrades should go into those four slots first. During the endgame, bigger bags make carrying a lot of items for raids much easier. Imagine running Naxxramas with 8-16 more bag slots than you had in WoW Classic.

You should be running with 16-slot bags now on your main and/or soon-to-be main. If not, regular Mooncloth transmute may have its cooldown removed when TBC Classic launches. It was originally removed in Patch 2.4. In which case stockpiling Felcloth now may be an economical way to get 16-slot bag upgrades when TBC Classic starts.

You’ll be able to upgrade to 18-slot bags for much less than you can now. Imbued Netherweave Bags will eventually be plentiful and affordable, compared to WoW Classic’s Bottomless Bags. If you’re low on gold then consider waiting for the initial mad dash on crafting materials to settle down. I expect these bag prices will come down faster than gear prices. After that, a tailor friend should be able to craft new Imbued Netherweave Bags at a decent cost.

An all-new 20-slot general use bag will become available for significantly more gold, the Primal Mooncloth Bag. Expect these to be the Bottomless Bags of TBC Classic, with pricing to match. Their cost will be prohibitive for most players initially. The Primal Mooncloth used for the bags will be sought after by healers putting together their pre-raid BiS list. Once most guilds are running Karazhan then you can expect prices to drop, and to continue to drop as the expansion continues.

22-slot bags for the filthy rich

A vendor sells a 22-slot bag, the “Gigantique” Bag. These will cost 1200 gold each, with no faction discount available. Buying four to replace your current bags will set you back 4,800 gold! These may not be available until as late as Phase 5, as they originally came out with the Sunwell patch.

If you haven’t purchased all six bank bag slots on your main character you’re in luck. The cost of the 4th through 6th slot is reduced in pre-patch/TBC Classic. And a new 7th slot is made available to everyone. The total cost for all seven slots is 111.1 gold, less than the original six slots in Classic. In addition to the price drop, the amount of gold you’ll make in TBC also goes up. In essence, those bag slots will be at a bigger discount after some time spent in Outland.

Using 14-slot bags will likely be the best cost per slot option. But filling them with 16-slot Netherweave Bags should be cheap soon enough.

Players into storing a lot of stuff, whether for future need or sales, will want to look into creating a personal guild bank. An initial investment of 1,850 gold buys you the first four tabs in such a bank, giving you 392 slots. Tied to a well-outfitted bank alt and you can have 624 or more slots available on one toon. Your typical WoW Classic bank alt can only hold 232 slots without breaking the bank.

For another 2,500 gold, you’ll unlock tab 5 and its 98 slots, a much higher cost per slot. The final tab 6 will cost you 5,000 gold, or over 50 gold per slot. These are overkill for most players, though the more aggressive auction house dealers may be willing to pay for the reduced reliance on alts.

As part of Burning Crusade Classic launching mostly based on Patch 2.4.3, faction discounts have been updated to offer varying savings depending on your faction level. Keep in mind we’ll end up being at least Revered with many factions in Outland as a requirement of raid attunements. PvP rank 3 discounts are gone in TBC Classic, due to the removal of the old PvP ranking system.

Be sure to apply the appropriate discount to your planned major purchases when working out your gold budget.

Do I Have Enough Gold?

Let’s go over some hypothetical gold amounts you may have as we enter TBC Classic.

You’re as broke as they come. You likely barely kept up with Naxx consumable needs and haven’t put the time into earning more gold. You are at a disadvantage compared to many other players, but the situation can be salvaged.

You’re closer to the norm for many players, especially those who consider themselves somewhat casual but still do well in raids. You likely won’t have an epic flying mount the same day you hit level 70. But you’ll have more options when choosing your priorities during pre-raid setup.

Believe it or not, you’re among the upper set of players in terms of net worth. To get to this level you set out to earn (or buy) more gold. And your efforts will pay off during TBC Classic Phase 1.

Here are where the wealthy players play. The ones who don’t measure their net worth just by gold, but also sellable goods. This group is primarily made up of two types of players. Goblins, who love the economic aspect of the game and make gold on the auction house or hawking rare items in trade chat. And gold buyers, who didn’t really accomplish anything.