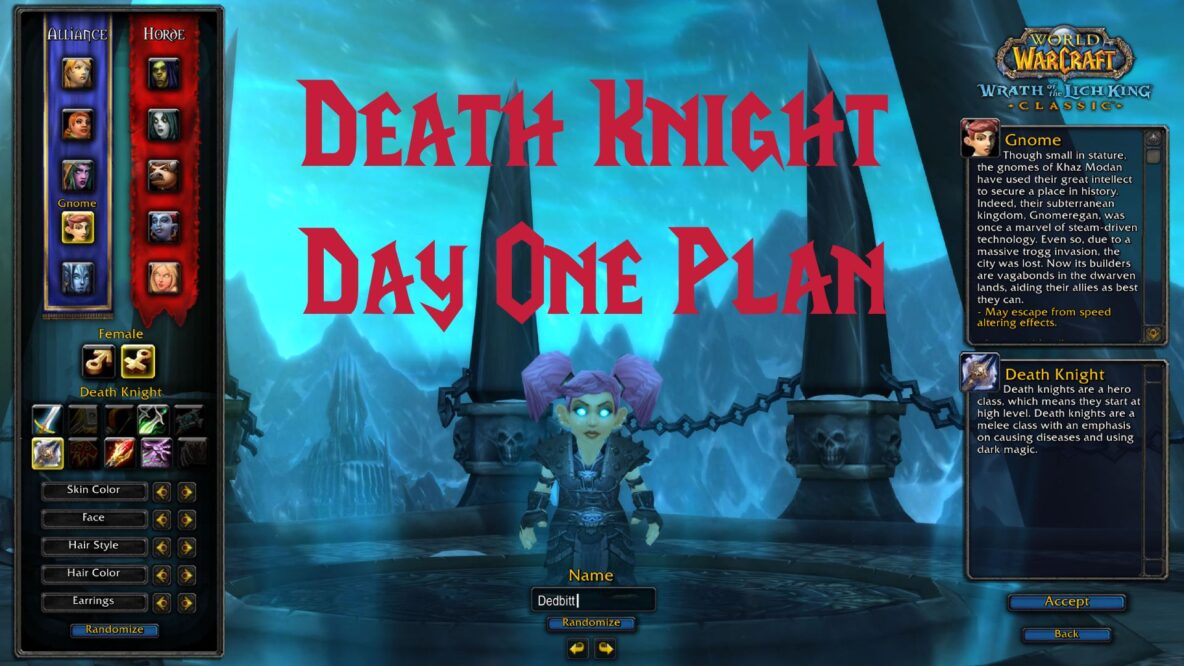 This is the plan for my new death knight main’s first day during the WotLK Classic pre-patch. It isn’t a speed leveling approach, but rather one designed to make my entry into Outland a bit easier. Instead of going straight into Outland at level 58, my death knight day one plan has me targeting trinket upgrades and easy bursts of XP in Azeroth for a few levels. While missing the initial leveling wave, allowing for an easier time completing Outland quests. 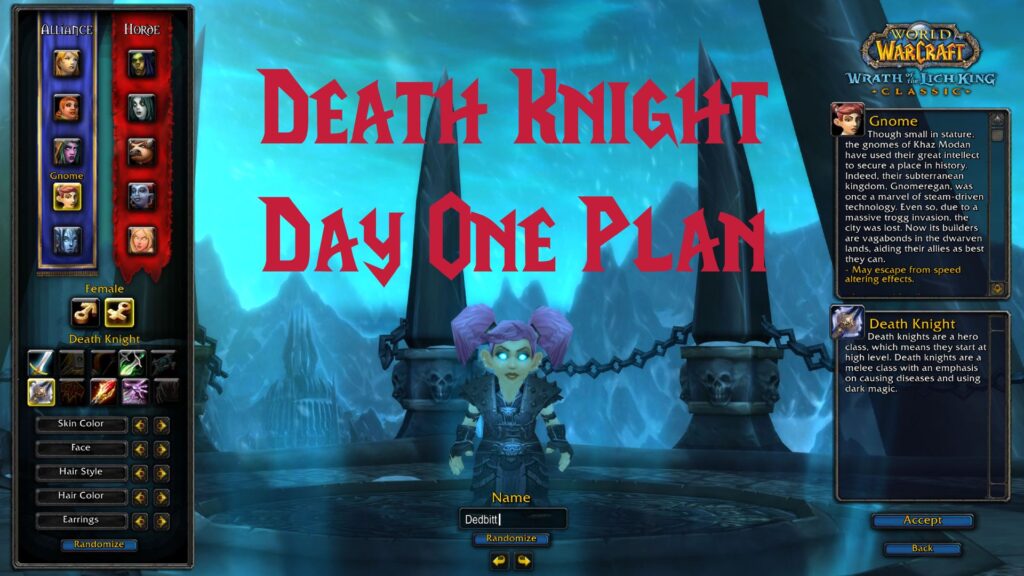 I started gathering items for my death knight’s leveling to 70 before the release of Sunwell Plateau in TBC Classic. You can find my complete death knight shopping list here. Many of the items on the list will be used during my death knight day one plan. It isn’t too late to gather your items, as most of them are quite common or easily farmed by your current level 70 character.

I’ve run through this plan on the WotLK Classic beta, which allowed me to verify some numbers and make several tweaks to improve my time spent. During my beta testing, the 50% XP buff expected during the WotLK Classic pre-patch was not active. As such I expect my XP gains during the real thing to be much higher.

To be clear, none of this is necessary to get a death knight up to level 70 during the WotLK Classic pre-patch. Leveling through Outland will be easier than ever. You can go straight from the death knight starting area and progress fine. I’m attempting this plan to make the early Outland parts of leveling easier. 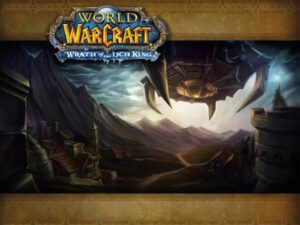 For the most part, you want to go through the death knight starting area and quests normally. The area will have a few potential bottlenecks, so better to get out ASAP by just progressing through the quest chain. My death knight day one plan doesn’t get started until you first arrive in Stormwind or Orgrimmar. You will be given everything you need to get through the content easily by the game, but there are a few things you can tweak if you like.

You’ll start with zero talent points and will earn talent points from many of the quests, as well as the usual 1 talent point earned per level. At the end of the event, you will have earned enough talent points to match a level 58 character (and will be level 58, not including the 50% XP buff).

You can spend your talent points immediately or wait. You can get through the entire content without spending any, but they do speed up your kill times.

Rune of Cinderglacier is ideal for two-handed weapons and dual-wielding main hands.

Rune of Razorice is ideal for dual-wielding off-hands only.

Tanks should use Rune of Spellshattering, as you should be using a two-handed weapon.

Yes, everyone says Rune of the Fallen Crusader is the best runeforge, and they are right. But you don’t learn it until level 70. So stick with the ones above while leveling up.

Get Your Horse First

Once you go outside the Ebon Hold you’ll pick up several quests. Complete Grand Theft Palomino first. It’ll lead to a quick follow-up quest, and then you’ll get your death knight mount. It is a 100% ground mount, at levels 55-56, and for free! It’ll make all other quests in the area much faster. 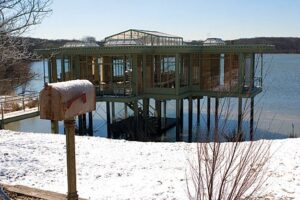 There is a functioning mailbox in the Scarlet Enclave, not far from the death knight base. It’ll have a quest marker to help you find it the first time. You can magically send stuff to your death knight “from the future.”

No new items are needed for your death knight to complete the starter zone. You won’t fill up the smaller bags you start with and you’ll easily beat any enemies with the gear you’re given. That said here are some items you could send and use early on.

Find Death Knights To Dual Going Down the Hills

The death knight NPCs you need to duel don’t have nameplates above their heads, making them annoying to find. The best spot is on the hills on either side of the death knight camp heading down to the battle areas. Click on one running by and it’ll stop.

When awarded a new cloak pick whichever one you like the look of. The DPS specs are the same, the only difference is a measly +5 elemental resistance.

Noth’s Special Brew is a special death knight potion that restores health and 50 runic power. It is only found in the death knight starter zone and you can only take 20 out into the world with you.

The initial quest will give you 5 brews. To get another 15 you’ll need to collect 60 more skulls. You’ll only get some of that from normal questing, so you’ll need to farm skulls to get the full amount.

Have all the skills you need and turned in before you accept Ambush at the Overlook. After that quest chain, you won’t be able to collect any more skulls. The last time to turn in skulls is before you complete the frost wyrm siege battle started by the Lich King. 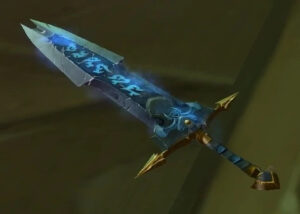 Greatsword of the Ebon Blade

After the battle at Light’s Hope Chapel, you’ll choose your final weapon reward. Go for the sword, the hit rating on it vs crit rating on the axe makes it the best choice. Orc death knights can pick up a better axe in dungeons or from the Ring of Blood event in Nagrand.

Be sure to runeforge your new weapon after you’ve cleared out the scourge from Ebon Hold, but before you head for Stormwind/Orgrimmar. 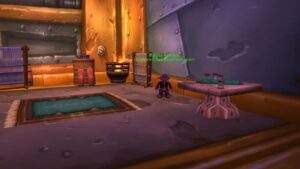 You can repeat the cloth donation quests for rep and XP in your other faction capital cities if you can reliably purchase portals or get a mage friend to help you out. Without a mage, this may not be worth running around and doing. The combined turn-ins are ~106,000 XP.

I’ll be making a pit stop in Gadgetzan (via Theramore portal) for Goblin Engineering before I finish up in Darnassus.

Now I’m going to complete a quest series for a new DPS trinket. Death knights get three trinkets from their starter zone:

None of these is a pure DPS trinket. I plan to get two new DPS trinkets as part of my death knight day one plan. I’ll also get a few other quests completed for XP without going out of my way. Not to mention avoid any initial rush on Plagueland quests from fresh death knights for a bit. 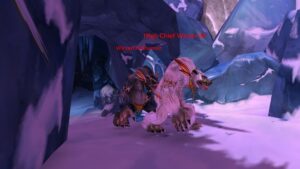 I hit level 59 at this point on the beta. I would expect to be closer to 60 with the 50% XP buff active on the live servers.

Now we return to the Plaguelands for another trinket and a load of prepped XP which requires Argent Dawn rep. Getting the needed rep is fast, and the process gives even more XP for easy fights. 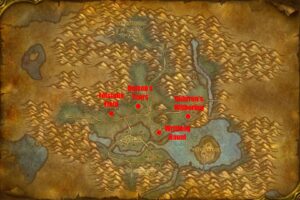 A side quest you should also try to get done is Alas, Andorhal (Alliance/Horde). Its reward is upgraded in WotLK to a +hit rating trinket, a big get for a leveling death knight.

On the beta, I hit Friendly with Argent Dawn during the final cauldron quest, but completing the last turn-in was still worth it for the XP. I was close to level 60 and expect to be at level 60 with the 50% XP buff active. I also earned 1570 reputation with Stormwind, which was nice.

You can skip getting and using the Argent Dawn Commission. I didn’t get nearly enough scourgestones for a single turn-in.

With our Argent Dawn rep now at Friendly, we can pick up and instantly complete five high XP quests at Light’s Hope Chapel. Plus a sixth quest that didn’t require any rep.

On the beta server, I hit level 60 with room to spare after these turn-ins. Again, that was without the 50% XP buff active. 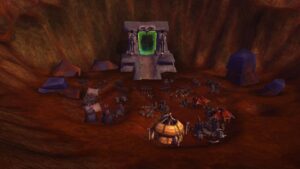 We’re almost done with the death knight day one plan. Now we get ready for Outland, with quick stops in Stormwind/Orgrimmar and Blasted Lands first for a final bit of rep and XP.

You can now also fly directly from the Dark Portal (Outland side) to Shattrath if you need to.

With my death knight day one plan, you will have the option to skip ahead to Zangarmarsh with ease or just blow through your quest objectives in Hellfire Peninsula. I soloed every group quest in Hellfire except for Overlord.

The XP earned above is equal to ~39 Hellfire Peninsula quests. Under ideal conditions, the direct to Hellfire approach may be faster, especially once you get the flying mount at level 60. I also expect you’d see higher XP per hour as there’s more killing and less traveling in Hellfire. But by showing up late I get to miss much of the early crowd, I get into a later and less populated layer, immediately have a flying mount, and can get through mobs and elites much more easily.