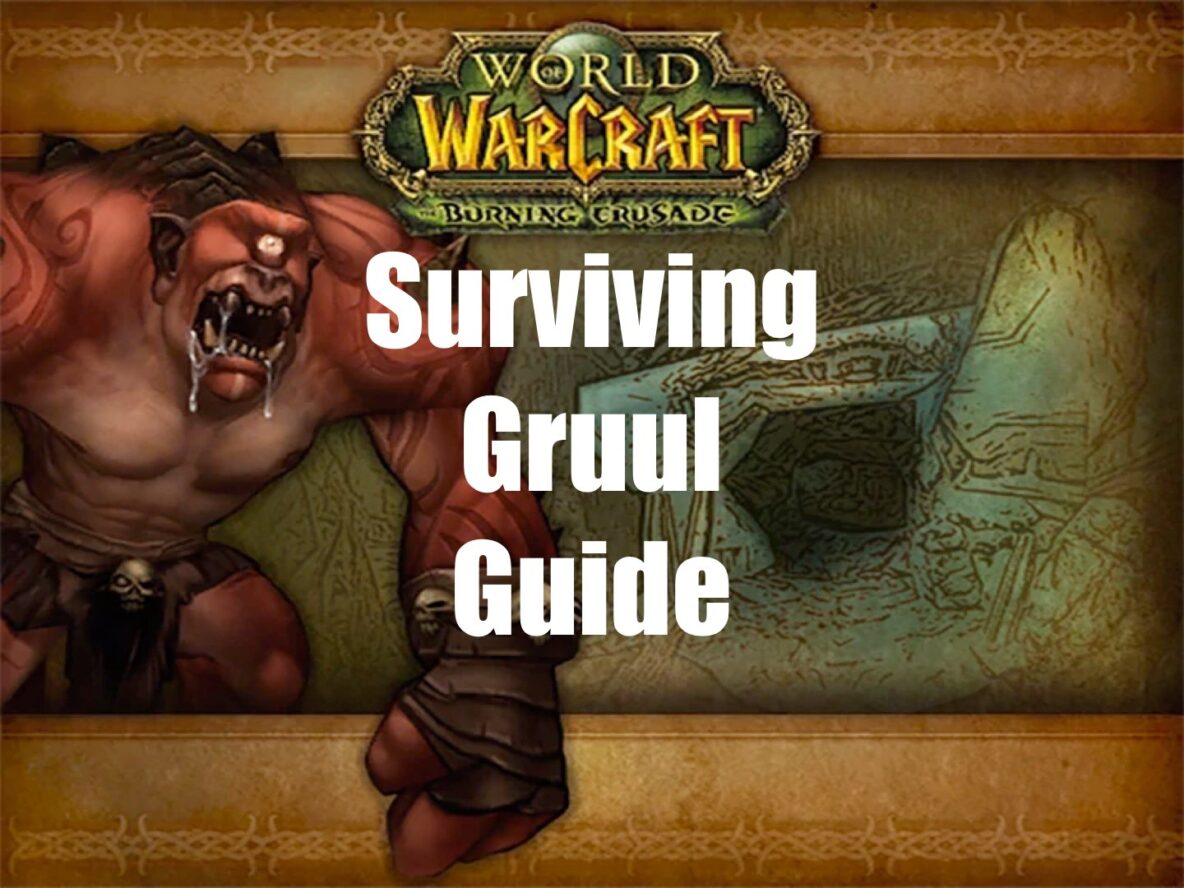 Gruul’s Ground Slam and Shatter combo kills a lot of raiders who are doing everything right. Almost everyone has died to the combo at some point during Burning Crusade Classic Phase 1. And some have died to it more than they’ve lived to the end of the encounter. This guide will give you tricks to improve your chances of surviving Gruul. 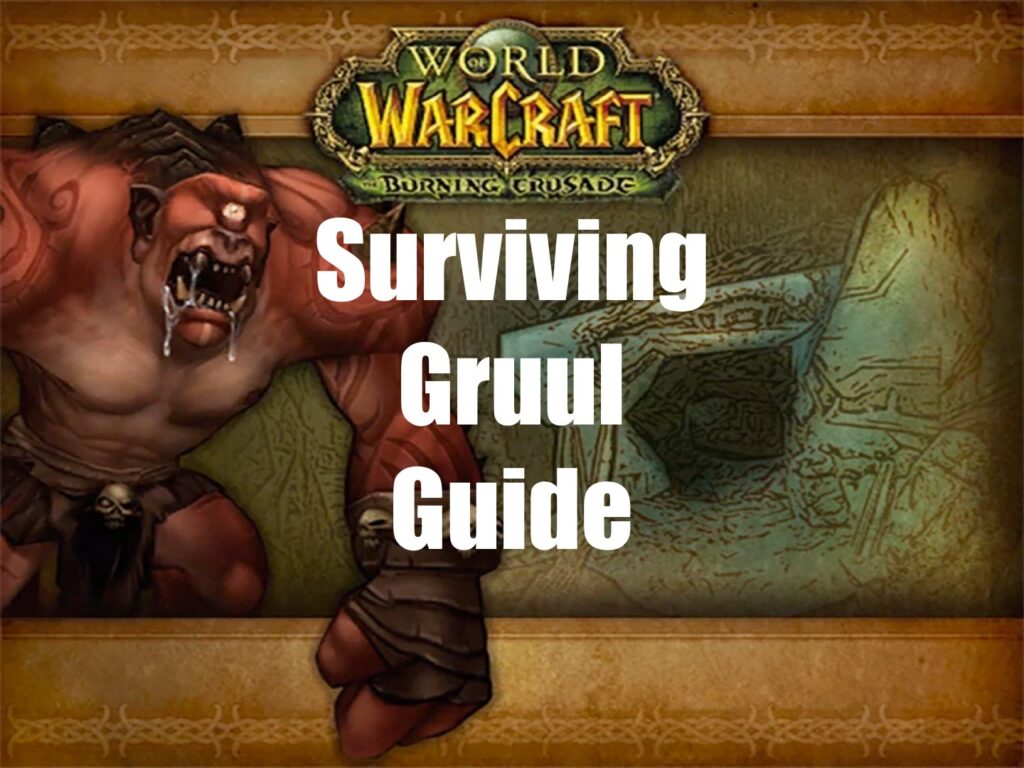 This is not designed as a raid guide. Many of these tricks are selfish in nature, helping you and not necessarily those around you. Keep in mind that if you live but key members of your raid team do not due to your action you’ll still end up dying to a wipe.

The First Shatter Is the Worst

The first Ground Slam and Shatter are the most deadly. All 25 members of your raid team are alive and getting bounced around. All things being equal this means the player density is the greatest after the Ground Slam. If players die after the first Shatter that gives everyone else more space to work with next time.

So when you pull out whatever tricks you want to use to increase your odds of surviving Gruul’s Shatter you’ll likely want them for the first round. You can still get into trouble later on, but the numbers say the first time is the most dangerous.

Change Your Point of View

Turn on Friendly Nameplates (Shift+v is the default keybinding). This makes it easier to see other players, as they’ll now have a thick, blue bar above them.

Zoom your mini-map to your tightest level before the pull. The range within the minimap is then close to the range of Shatter. Any other player dots on the map are players close enough to hurt you.

After a Ground Slam change your camera angle to a top-down (birds-eye view) direction. You’ll be able to see more players in all directions around you as you run. The downside is picking your own direction may be confusing with this perspective, requiring some practice.

With better awareness of others around you may find running isn’t always the best option. Getting flung to the center of the room, for example, is usually a good time to stand still. Player instincts are to head toward a wall. If everyone does that but you then you’ll be in a clear space by doing nothing.

No class ability will prevent incoming damage from Shatter. But several can remove the movement debuff, giving you a better chance to run to a safe spot.

You’ll likely want to use these cooldown abilities after the first or second Ground Slam.

All players have a defense skill that can go up to 350 at level 70. Typically non-tanks don’t think about this skill, but it is useful for Gruul. The Shatter damage is physical, so a higher defense skill level helps to reduce the damage. Check your skill level and if needed go out into the world and get beat up by mobs to raise your level. Keep in mind going from 349 to 350 will take much longer and may not be worth your time.

Holy paladins, elemental shaman, and resto shaman should consider wearing a shield during the Gruul encounter. A spec-appropriate shield increases armor and block, which in turn helps reduce the physical damage from Shatter.

You can buy a great shield for 33 Badge of Justice:

Consider bringing some or all of these consumables specifically for dealing with Gruul’s Ground Slam and Shatter attacks.

Elixir of Major Fortitude – Increases maximum health by 250 and restores 10 health every 5 seconds.

This is a Guardian Elixir, so you’ll need to skip your usual flask and use a class/spec-appropriate Battle Elixir instead. It isn’t a big boost in health, but every bit helps and it will last you through the entire fight.

Flask of Fortification – Increases maximum health by 500 and defense rating by 10.

Probably overkill in terms of cost to benefit. But this flask does offer more health-boosting for the entire encounter than any other option.

Greater Ward of Shield – Applies to your shield. Absorbs up to 4000 damage (use before combat).

Essentially a 4000 point shield, but only usable by shield-wielding classes. I personally use it for Gruul on my elemental shaman and have survived 4-5 person shatters thanks to it. You cannot apply it during combat, so you have to use it before the pull. It will last until used up or you take off the shield. If a guild blacksmith can make them they are fairly low cost.

Nightmare Seed – Increases your health by 2000 for 30 seconds (3-minute cooldown).

These are gathered from herbalists picking Nightmare Vines. They have a low cost at the auction house. The temporary health boost will help you to survive a shatter with too many other players around you. You need to pop it after you know you’re in trouble, but before you are frozen.

There are safe spots in Gruul’s room where Ground Slam will not affect you. You will still get hit with Shatter, but you won’t be slowed or flung in a random direction beforehand. This gives you more control to help with surviving Gruul. You can even keep casting/shooting to increase your parse during the Ground Slam.

The safe spots are any grey rocks (not curved upward brown ground) you can get on top of. As well as flat parts of the wall which are elevated above the ground. Some rocks are next to the wall on their own, otherwise, it is raised and flat areas around the wall. They are found on all sides, with more behind and to the right of Gruul (looking from the entrance) than in the other directions. 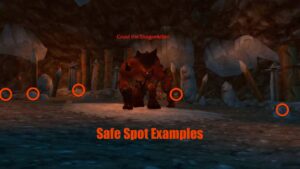 There are two downsides to these safe spots.

One, you may be out of range of the boss. If Gruul is tanked in the center of the room then you’ll only be able to use attacks with a 36-yard range. That makes these spots useless for a lot of classes and specs. Consider these a useful option if the distance and location work in your favor, but not something you can consistently rely upon.

Two, you are backed into a corner for Shatter. You aren’t slowed and know exactly where you’ll end up, but other players may get flung in your direction. Player instincts are to run to the wall, exactly where you are. So some bad luck can still get you killed.

Phase 2 Will Help With Surviving Gruul

As part of the changes coming to Burning Crusade Classic Phase 2, Gruul’s health and damage output will both be reduced. Shatter should do less damage and there should be fewer of them, as your raid team’s kill time will be faster.

This doesn’t help anyone trying to score a high parse during Phase 1. But for everyone else having surviving issues future encounters should be better without you having to change anything.