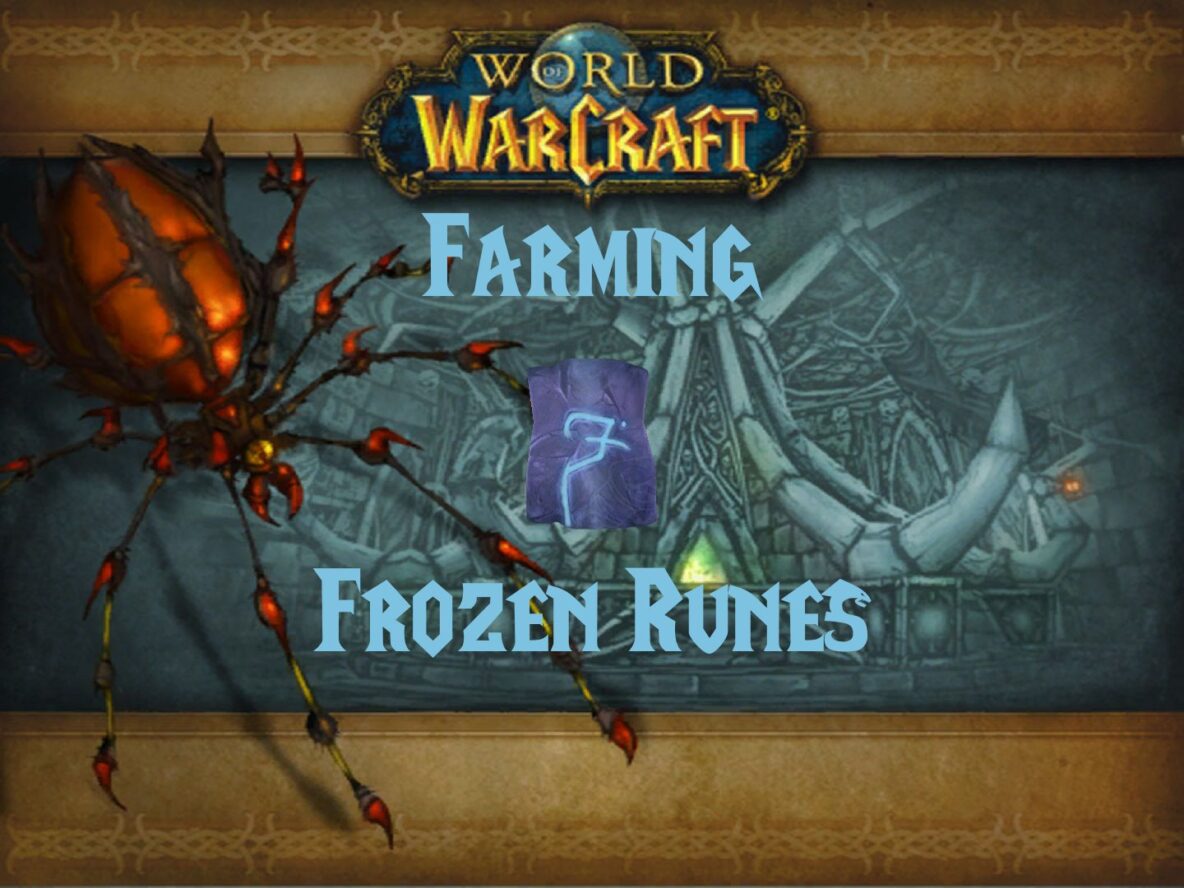 At first glance, Frozen Runes are a consumable for preventing fire damage. But that is a poor use of them, as they are also a critical component to crafted frost resistance gear. Gear many guilds will want to help take down Sapphiron. Frozen Runes are picked up inside Naxxramas, requiring a Word of Thawing to do so. For full guild runs the process is easy enough. Loot Word of Thawing from Naxx trash, use them to pick up Frozen Runes. But there is also an opportunity for small groups and individuals to get in on farming Frozen Runes. Helping your guild craft its frost resistance gear sooner. Or making a tide profit. 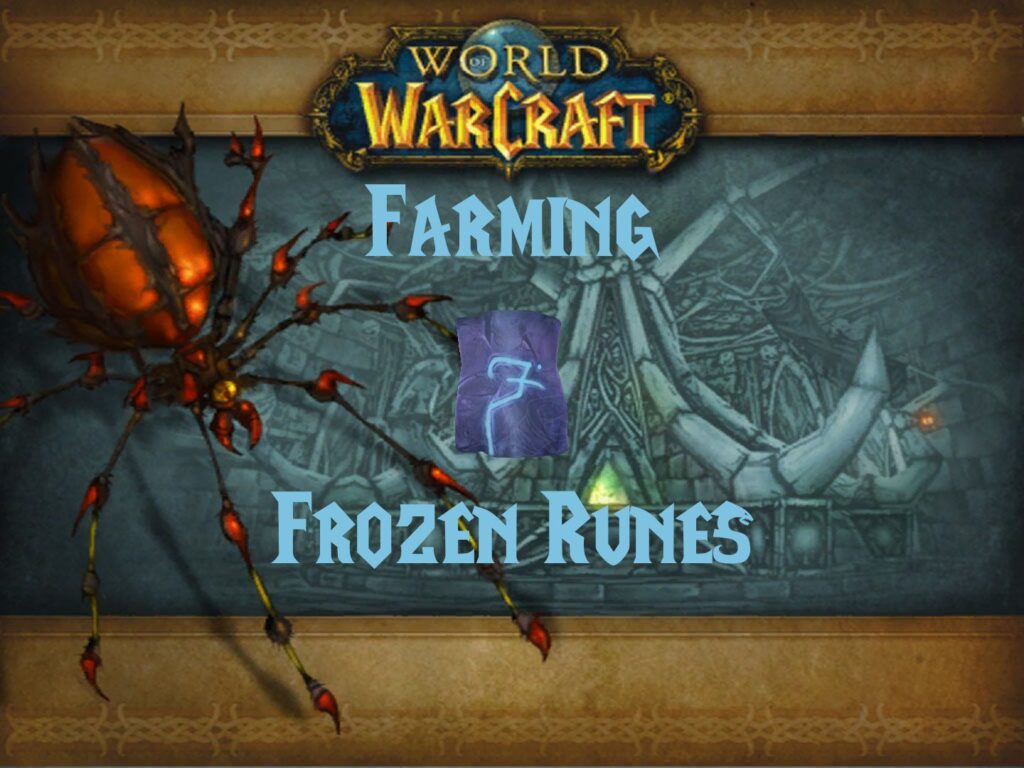 Wowhead has a limited number of trash mobs shown to drop Word of Thawing, but that data could be incomplete. We’ll need to wait for Naxx’s release to get confirmation.

Once we know which trash mobs can drop Word of Thawing there will doubtless be farming guides and videos produced. Mages have shown an ability to do a lot solo in Classic, so expect them to have solo farm options. Small groups, especially of well-geared players, will likely be able to take on small trash packs.

Once you have some Word of Thawing it is time to get it to a rogue (or adventurous druid). They are tradable and we should expect to see them on the auction house within hours of Naxx being released.

A rogue, armed with Word of Thawing, can stealth into Naxx and pick up Frozen Runes in the right locations. A few farming videos from private servers are already available. As with Word of Thawing farming, expect more detailed videos after Phase 6 arrives.

The gist is you can stealth past various trash packs, looking for Frozen Runes found along the walls. If you find one far enough away from any mobs you use a Word of Thawing, then collect the Frozen Rune. You’ll need to make use of a rogue’s stealth toolkit, including distract, vanish, and sprint.

Each Frozen Rune spot will offer between 3-6 Frozen Runes, similar to gathering professions.

Stealth increasing gear and other things can improve your chances of getting through.

Some reports from the Naxxramas public test realm suggest that looting Frozen Runes is locking that character to a raid ID. For raid rogues going into an instance, their guild has already entered this isn’t a problem. But raid rogues hoping to farm Frozen Runes ahead of raid night need to be careful. If they do get locked to a raid ID they will not be able to enter with their guild later. Confirmation of this once Naxx is released is needed, so check before you go on your first farm run.

There are also reports that Frozen Runes inside the same raid ID do reset after about 5 days. If confirmed this would allow for double-dipping a single raid ID each week. Raid rogues could go in days between or after their guild’s raid nights, depending on their schedule. Keep in mind Naxx will reset on Tuesday.

Every toon hoping to go into Naxx for Word of Thawing or Frozen Rune farming will need to be attuned. Attunement requires, at a minimum, Honored with Argent Dawn. You then buy your way in, with Honored paying the most and Exalted getting in for free. Rogue and mage alts will need to balance the time and gold involved in gaining attunement, verse the rewards from farming Naxx outside of raid runs.

As with most hot new farms in WoW Classic Frozen Runes will start at a ridiculous price. But will eventually saturate the market. The best profits will be in the first week or two of Phase 6. After that expect prices to drop until they find their bottom. And then drop even lower as Phase 6 wears on.

At the start of Phase 6 anyone who completes the Naxx attunement quest can get into the raid instance. Just invite a friend, convert the party to a raid, and zone in. Prepared players can start farming for Word of Thawing immediately, followed quickly by stealth runs for Frozen Runes.

For the first few weeks of Naxx Frozen Runes will be the bottleneck on having enough frost resistance gear. In vanilla, the intent was for guilds to do many partial runs before they could face Sapphiron. But in Classic, we’ve seen raids cleared in hours where it once took weeks. Guilds who can push past Sapphiron will be able to skip frost resistance gear. Anyone who gets stopped will want as many Frozen Runes as they can get.

As more how-to videos are released more players will try the farm for themselves. Not everyone will have a good experience with it, but those who do will stick with it if they find it fun or profitable.

Within weeks everyone interested in farming Naxx will have what Frozen Runes they need. While continuous runs generate more and more mats. You’ll have the occasional new player or alt getting geared up. But at some point, there’ll be no value in farming Naxx solo.

Depending on your regular raid days consider gathering a group to venture into Naxx for farming Frozen Runes ahead of time. Kill trash mobs for Word of Thawing, then later have your rogues try stealth farming. As long as you don’t down a boss you won’t be saved into a raid ID.

You can set master loot to capture Word of Thawing. A script allows you to set it to work on anything Common (white) or better Type in or create a macro:

Change “NAME” to the master looter’s name. You must be the raid leader to use the script, but you can set it to another player. The master looter will have a busier job as any white items will pop up for you, and only use. But it allows for more controlled looting of Word of Thawing to a single player. Frozen Runes should not be affected by this. Plus the master looter is likely the person picking them up.

Try Sapphiron Regardless of Gear Status

Focus Early Frozen Runes Where They’ll Do the Most Good

Frozen Runes will be a bottleneck for many guilds in the early weeks. Focus them where frost resistance gear will do the most good. Most likely it will be your melee DPS, followed by ranged DPS. Your early Sapphiron attempts should show where a lot of the frost damage is going.

Buying Frozen Runes will be an option early on, but likely at a high price. Remember you’ll need to run with more consumables in Naxx which also cost a fair bit of gold. Find a balance that works for your guild members. Remember Naxx is the last bit of content WoW Classic has to offer, so there’s no rush.

After a few weeks, the market price of Frozen Runes will settle down, but you may also be past Sapphiron by that point.