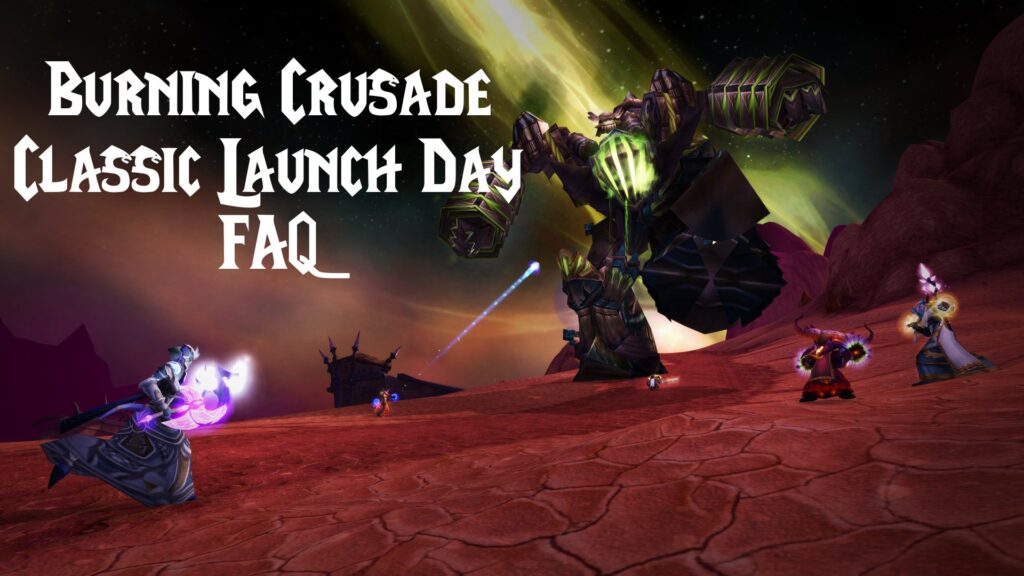 What is happening today and when?

Times are for NA servers.

At 10:00 AM ET servers go down for maintenance. This is being listed as standard Tuesday maintenance, only scheduled for an hour.

At 6:00 PM ET Burning Crusade releases. If all goes to plan there is no server restart, it simply happens. At that moment you can go through the Dark Portal. Those doing quest turn-ins can do so and earn XP.

This means, barring issues with maintenance, you can continue pre-patch activities through much of today. Including completing the quest Into the Breach, which goes away at the TBC Classic launch.

Will there be problems?

It is entirely possible, but any discussion of launch issues is just speculation.

The original TBC launch had server crashes and queues. The TBC Classic pre-patch certainly had a lot of problems, launching 10 hours late. But for the TBC Classic launch Blizzard isn’t having to do as much. With pre-patch, they were copying all characters and launching two games at once (TBC Classic and Classic Era). Here a 0 turns into a 1 at the designated time. All the assets for TBC Classic are already in place.

Still, I recommend having a Plan B in case of issues and/or long queues. Hang with your guild in Discord while you wait. Or take care of real-life stuff so you can play more later in the week.

Who can go to Outland?

Any level 58-60 character can go through the Dark Portal. Lower-level characters can be summoned.

You don’t need Tier 3 epics or even pre-raid BiS to play in Outland. It was balanced for level 58 characters in quest greens. If you did the Blizzard boosting you’re fine. If you did dungeon boosting make sure your gear is somewhat level appropriate.

There will be immediate and significant gear upgrades within the first few quests and first dungeons for those not in higher-level raid gear. Soon enough you’ll both be more powerful and look more ridiculous.

What should I do first?

There are several options, none of which are incorrect.

Decide now if you’re going Aldor or Scryer with your first character leveling to 70. Much of Shattrath City is locked until you choose a faction.

Most players are basing their decision on the shoulder enchants and Phase 6 items. Recipes make BoE items, so you can buy the other side’s stuff. The offered gear is nice before raiding, but much of it will be released soon enough. Check out these guides and consult your class Discord and/or guild class experts.

You can get to level 70 and complete Karazhan attunement with either path.

Or do both. You could lose out on some dungeon rep, but being flexible could keep you active and engaged in the game more consistently if your schedule doesn’t always match your friends.