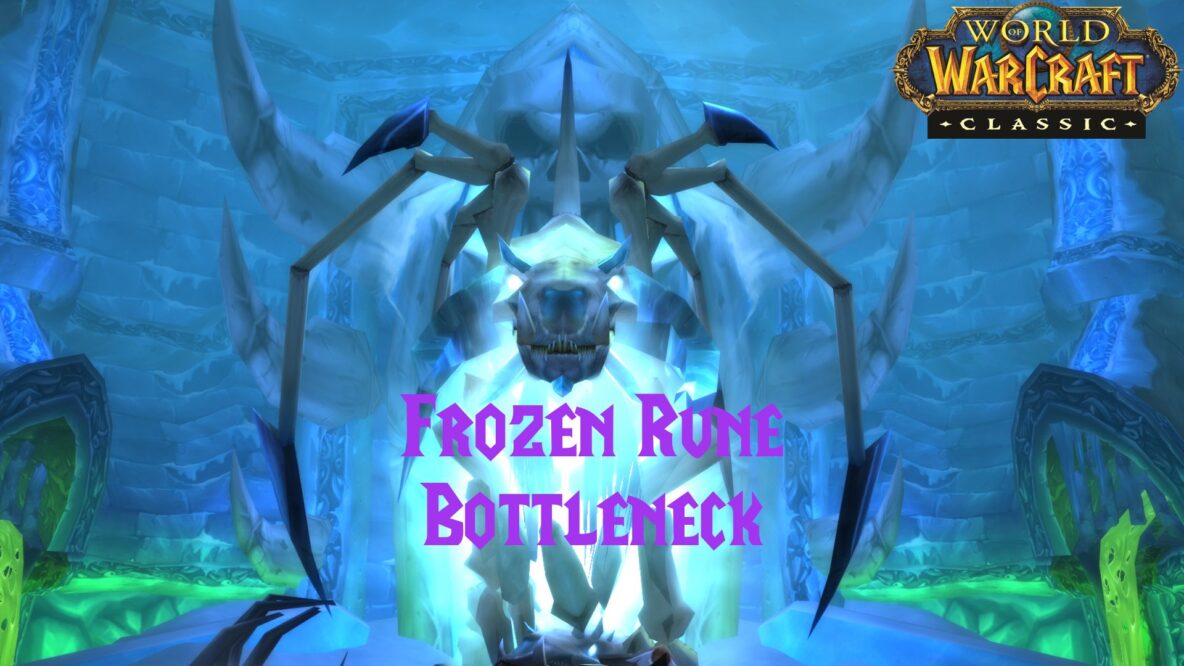 With the arrival of Naxxramas comes the need for frost resist gear for many players. The best frost resistance gear comes from quests and recipes within Naxx. All which need Frozen Runes, which are also found inside Naxx. Frozen Runes will be the bottleneck on getting your 40-man raid outfitted. But you can have a plan for dealing with the Frozen Rune bottleneck. Helping your guild get past Sapphiron as fast as possible.

The info below is largely based on the Frost Resistance Gear for Naxxramas guide.

Do We Need Frost Resistance In the First Place?

Classic is different from vanilla, which we’ve seen over and over in raiding. In Classic, there is no raid wide fire resistance needed in Molten Core or Blackwing Lair. Some guilds clear new raids within hours of release, compared to weeks or months back in vanilla. But we still run into encounters where you need to gear up. Warlock tanks for Twin Emperors in AQ40 need shadow resistance sets. Many guilds use nature resistance with their melee and hunters for Princess Huhuran. If your guild does the latter then you’ll likely need frost resistance for Sapphiron.

During the public test realm run of Naxxramas Blizzard buffed players inside the instance. They wanted to test mechanics, not balancing. During Sapphiron’s testing Blizzard included a 200 frost resistance aura. A strong sign of where Blizzard feels the balance is for that fight.

By all means, guilds who clear to Sapphiron should give the boss a shot, even with no resistance gear. But some gear by most players is still expected to be needed. How much will vary by guilds, determining how many Frozen Runes you need to overcome the bottleneck.

In short, trash mobs can drop Word of Thawing. These are used to thaw Frozen Runes embedded in the walls throughout Naxx. Once thawed they can be looted, offering 3-6 Frozen Runes. All these items are not bound, so expected farming runs to be done and both items to appear on the auction house.

Guilds will naturally be collecting Word of Thawing and Frozen Runes during Naxx runs. How many depends on how far you get and how lucky you are with RNG.

Guilds will want to be sure that all Word of Thawing and collected, likely to a central member. That person then uses them to loot Frozen Runes. Guild officers should handle their Frozen Rune collection, following the priority lists outlined below.

You can set master loot to capture Word of Thawing. A script allows you to set it to work on anything Common (white) or better Type in or create a macro:

Change “NAME” to the master looter’s name. You must be the raid leader to use the script, but you can set it to another player. The master looter will have a busier job as any and all white items will pop up for you, and only use. But it allows for more controlled looting of Word of Thawing to a single player. Frozen Runes should not be affected by this. Plus the master looter is likely the person picking them up.

Smaller groups of players and maybe some solo mages can go into Naxx and farm trash mobs for Word of Thawing. Naxx trash also drops some nice epic pieces, so it shouldn’t be too hard to organize a mini-raid within your guild.

There are reports from the PTR that players can get locked to a Naxx raid ID without killing a boss. We’ll need to wait for confirmation of this when Naxx is released. It could determine how you go about farming trash and Frozen Runes. And before we jump to using non-raiding alts remember the cost of attunement.

Different frost resistance pieces need different amounts of Frozen Runes. Cloth, leather, and mail armor all have the same ratios per slot. Plate armor is about the same, with different numbers. But as the plate set is +defense most of your warriors and paladins will be opting for one of the other sets anyway.

Given the Frozen Rune bottleneck, you’ll want to focus on how much frost resistance per Frozen Rune you can get from each piece. That gives us a clear slot priority order:

You should also use Tier 3 helms for free frost resistance. And everyone should farm up at least one Ice Guard for the legs. Go ahead and get two if you don’t normally wear your Tier 2 helm.

This order assumes most of your raiders have little to no frost resistance gear already. Obviously, if someone has a pair of frost resistance rings you would want to skip the Naxx ring initially. If you limit how much frost resistance certain classes start out with then you may swap pieces around to better fit your goals.

Keep in mind both the ring and legs are quest rewards. Making them easier to start with as their material requirements aren’t too bad. And no specific crafters with the reputation are needed.

Assuming you get to Sapphiron within a week or two of release the Frozen Rune bottleneck will be in full effect. Preventing you from outfit 40 players equally by the time you face the boss. In which case you should consider how much resistance each class and role needs. You can funnel more Frozen Runes to the groups who need higher resistance.

These abilities don’t focus on any one group. Frost Aura impacts everyone, while Blizzard and Ice Bolt are random.

Melee shouldn’t suffer more from the frost mechanics than anyone else. But you also don’t want them soaking up too much of your healers’ resources. As most aren’t hampered by mana issues they should have more frost resistance on the outside. Gearing up to 200 frost resistance.

Keeping a strong mana pool is important to range DPS, and resistance gear reduces that. So you want to find a balance, which probably means less resistance gear than on melee. Consider limited their initial gear to 130-180 frost resistance.

These specific classes will fall somewhere between melee and casters. You don’t want them requiring a lot of healing, and they can keep doing damage without mana. But running out of mana does reduce their DPS output.

You don’t want to hurt your healers’ +healing and mana pools too much. Consider limiting their initial gear to 70-100 frost resistance.

You should only need one tank for Sapphiron. In addition to frost damage, they will also be taking significant physical damage. Many strategies recommend mitigation gear over frost resistance gear. If you go this route identify who will be the tank, and make that person last on your priority list. Once past the Frozen Rune bottleneck, they are collect frost resistance gear, which may help out the healers.

Assuming your raiders have little to no frost resistance gear before Naxx arrives this is the plan I would recommend until through the Frozen Rune bottleneck:

After that evaluate what you need in terms of frost resistance. Don’t discard any Frozen Runes, even once Naxx is on farm status. If you lose any raiders you’ll want to help get replacements outfitting ASAP.

However, your guild decides to prioritize Frozen Runes be organized in their distribution. And be transparent with your raiders on what the plan is, and why. The Frozen Rune bottleneck will prevent you from satisfying everyone at once. But knowing the good of the group is being considered above all helps.