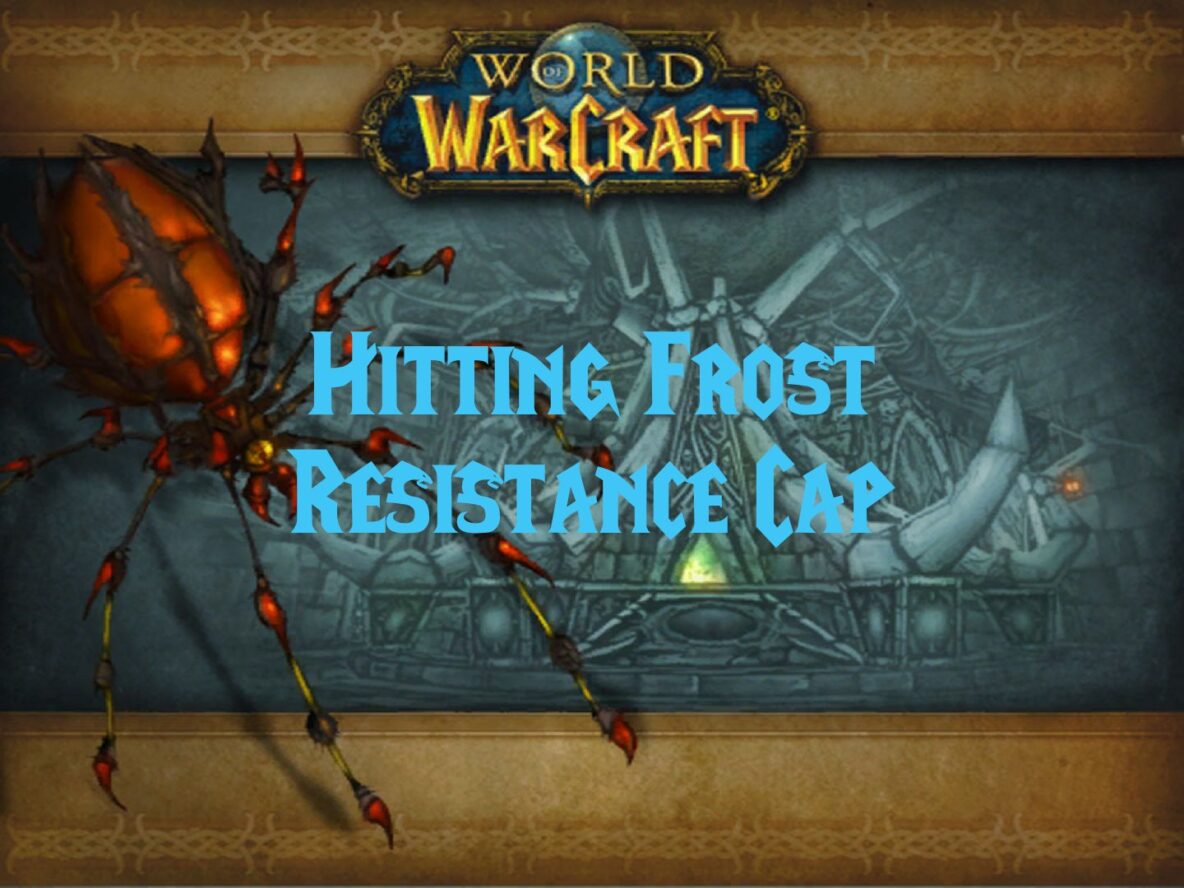 Thanks to my Frost Resistance Gear for Naxxramas guide I’ve had a few conversations about hitting the frost resistance cap. I thought I’d also share the information I gathered with everyone here. Hopefully, it’ll help others with their own frost resistance set planning. 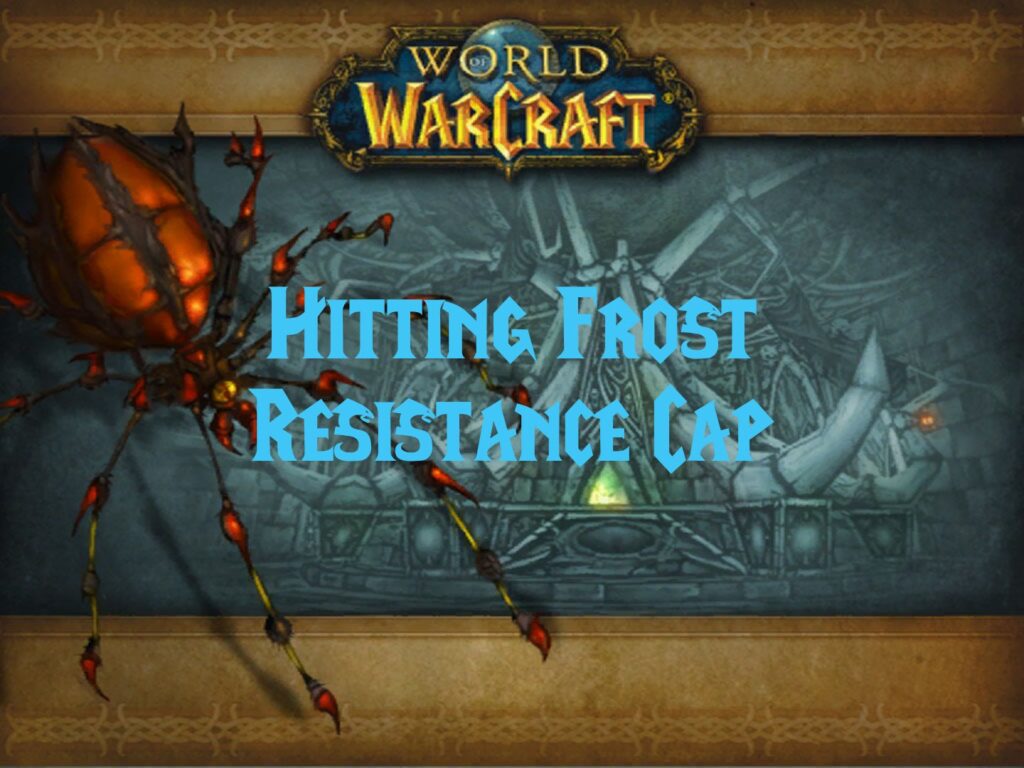 It is great to see players planning and wanting to be prepared. It bodes well for themselves and their guild. But before we get into the numbers I want to say I don’t believe anyone will need to reach the frost resistance cap to get through Naxx. Melee DPS will likely need the most, but I think we’ll find most guilds do fine well below the cap. And based on past performance we’ll see some guilds blow through Naxx without any resistance gear.

What Is Frost Resistance Cap?

Frost resistance cap in WoW Classic is 315. That goes for any elemental resistance, they all cap out at 315. That is for your total resistance with gear and buffs. Anything over 315 is wasted, as well as hurtful as you’re giving up other stats for no good use. Your last piece of gear may put you over 315 resistance, at which point it is a personal calculation of which is best. Hitting (and exceeding) the cap for maximum protection? Or giving up some protection to keep other vital stats?

When hit with spell resistance is calculated twice. The first is whether the spell lands at all or not. This is determined purely by caster and target levels, with no resistance gear. In Naxxramas players will be 3 levels below the bosses, putting us at a disadvantage.

The second determines how much damage you take, based on your average resistance. This is a weighted average formula calculated based on your resistance and the caster’s level.

What Is It Worth?

Using the average resistance formula above we can see how much protection frost resistance will provide.

Note that average resistance is just that, the average amount of damage you’ll resist over time. It is a weighted average, so the further from the average the less likely it is to occur. At frost resistance cap you are as likely to resist only 50% as you are to resist 100%. Resisting less than 50% becomes increasingly unlikely.

Going for frost resistance cap will be at the expense of other stats. You really need to pay attention to stamina and what your total health is with and without the extra resistance gear. It doesn’t help to resist an extra 500-1000 in damage if the one time you don’t kills you.

How To Reach Frost Resistance Cap

The best approach for you will depend on the type of armor you can wear and the party buffs you can expect to get. Here I’ll go over an option with and without having the best party buffs. There may be other approaches to reaching the frost resistance cap that I don’t cover here. Especially for paladins and shaman, who can wear several types of armor and will always have the best buff.

If you aren’t an engineer then hitting cap without paladin or shaman buffs are going to be difficult, if not impossible for some. The frost resistance trinkets available to engineers push most of the sets below 315 frost resistance.

Note that the suggestions below ignore the pieces of frost resistance armor that drop in Naxxramas. This is more geared toward players prepping for frost resistance cap before Phase 6 arrives. Or who don’t want to be beholden to the RNG of a drop and winning the loot.

Most casters/healers won’t be able to hit the frost resistance cap without a paladin or shaman in their party.

That only gets you to ~309 if an engineer, and only ~289 if not. A mage using Mage Armor/Ice Armor with engineering can hit a frost resistance cap. But you’ll find the Tempestria’s Frozen Necklace is a PITA to get. It comes from a 2-day spawn timer rare, has less than a 20% drop rate, and people farming the elemental invasion in Winterspring will hate you for killing the boss.

With a paladin or shaman in your party, you only need to reach 255 frost resistance on your own. Doable, but still a lot of effort if not an engineer or a mage. Remember Gift of the Wild doesn’t stack with the paladin/shaman buffs.

Leather wearing engineers can get close to frost resistance cap on their own.

If you’re an engineer you can get up to 309 FR. If you’re also a dwarf you can hit cap. If you’re willing to put in a lot of time you can also reach the cap by getting Tempestria’s Frozen Necklace. With an 18% drop rate from a 2 day spawns rare elite in Winterspring who is difficult to solo. And will likely get you to hate whispers for killing, as it ends the elemental invasion in that zone.

You’ll want to take advantage of some leather pieces as well as mail. Especially if you benefit from agility.

Engineers can hit the cap with points to spare. Dwarves with high AV rep are really close, needing a +21-22 ring to hit cap. Everyone else will need to add Tempestria’s Frozen Necklace to reach the cap on their own. A lot of effort for those last few points.

Plate wearers can mix in some leather and/or mail items to close in on frost resistance cap. Still helps to be an engineer… or a paladin.

The defensive plate frost resistance set offers more resistance than its peers. Engineers can easily hit the cap. Dwarves with high AV rep can also hit cap. Everyone else will need to add Tempestria’s Frozen Necklace to reach the cap on their own. A lot of effort for those last few points.

With a paladin or shaman in your party, you only need to reach 255 frost resistance on your own. That’s 33 FR from any non-Naxx sourced items, giving you lots of combinations.