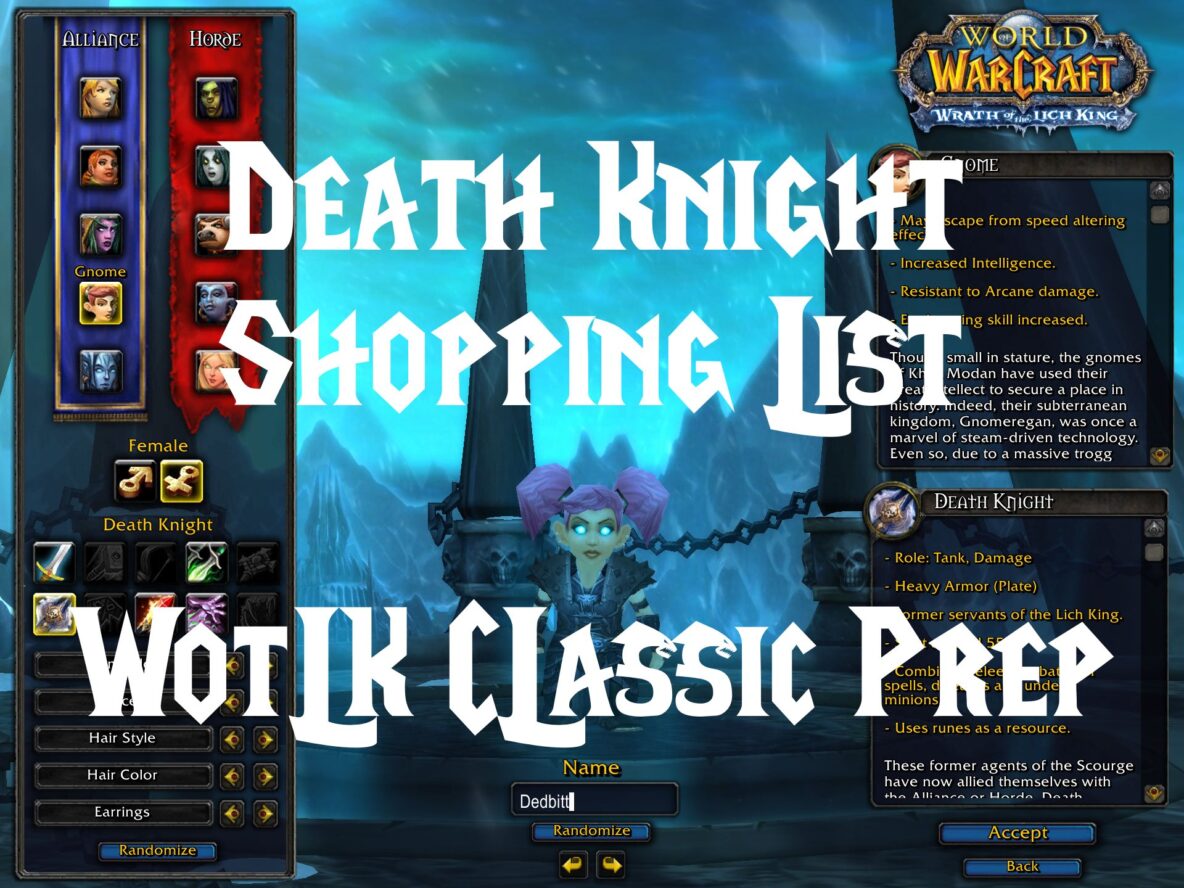 This death knight shopping list for WotLK Classic prep is designed for players wanting to get their new DK to level 70 ASAP. The gear and items on the list all help cut down your leveling time a bit, and more so altogether. Nothing on this list is required for anyone wanting to level a new death knight more casually. I put this together myself to get into Outland raids before the full launch of Wrath of the Lich King Classic.

This list has been updated with new data coming out of the WotLK Classic beta and my testing and experience on the beta server. 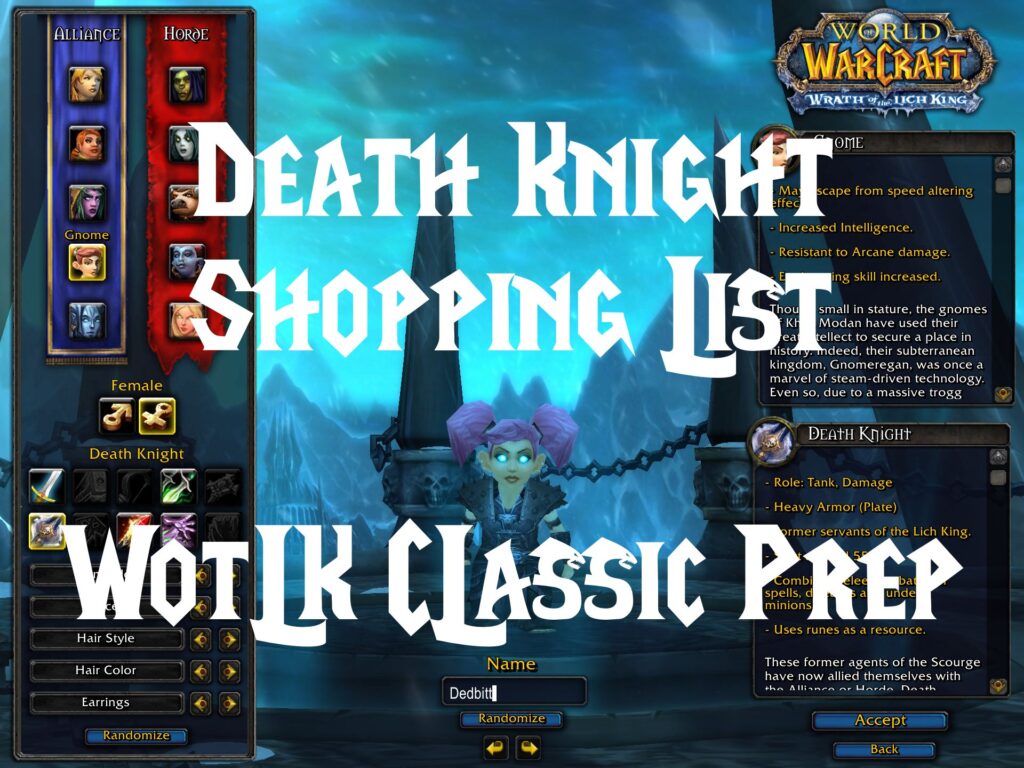 The single most helpful resource when prepping for WotLK Classic is gold. A modest amount gets you past the initial gold sinks in Outland and Northrend.

You’ll need 1400 gold for the expenses above minus Cold Weather Flying (you can add 1000 up front or just wing it with quest rewards from Northrend). Round that up to cover any other basic leveling expenses and to give you a head start on level 70 spending. This amount does not include the cost of bags or any other items listed below.

These are by no means must-have items. But if you want to save up a lot of gold for big toys these are the more popular options.

You don’t need all the gold for all the things you want in WotLK before the new expansion launches. There will be more gold earning potential in Northrend than we have in Outland, making gold farming easier later on. Focus on your more immediate needs and then achieve/save as you can without stressing over your eventual total.

Bags – The First Item for Your Death Knight Shopping List

Netherweave Bags may be cheaper if buying bags and not mats, but they will bind to your death knight.

Imbued Netherweave Bags are an upgraded starting point if gold isn’t as much of an issue for you. Or compromise and get four of these for your character and 7 cheaper bags for your bank.

You don’t need the largest bags in Outland to get started. The TBC 20-slot bag will be much cheaper once the WotLK Classic pre-patch is out. But you’ll likely find even cheaper versions after WotLK Classic fully launches.

When comparing bags use gold per slot, not the total cost.

There are three reputation grinds of note you can speed up by stocking up on repeatable turn-in items:

The idea is to turn in a lot of Runecloth you bought for cheap (or farmed) to save some gold on your fast-flying training. The new trainers in Hellfire Peninsula are tied to Stormwind and Orgrimmar factions. If you do not intend to buy fast flying for your death knight as soon as they hit level 70 then there is little benefit to grind this faction immediately.

The Runecloth sums below are not cumulative. Pick your desired reputation level and that’s how much Runecloth you need in total. It does NOT include the 60 Runecloth or other clothes you need for the initial, XP giving turn-in.

Initially, older reports were that death knights ended up Friendly with Stormwind/Orgrimmar after completing the starter area quest chain. But early WotLK Classic beta data is showing they’ll start as Honored. We’re going with the beta data for the numbers below.

For most players, the Honored discount without any extra effort is the best option. The biggest problem with going for Revered or Exalted is the required bag space. Bag space issues can be overcome with some new bank alts and cheap bags. Also if you’re not getting Runecloth cheap you’ll come closer to breaking even than saving any meaningful gold. But the option is there if you want it.

Human death knights can take 10% off of the Runecloth requirements listed above.

The quest needed to pick Aldors or Scryers in Shattrath City was broken on the beta for me and other death knights. We don’t know if that is a bug that’ll be fixed or what.

Aldor is the recommended Shattrath faction for death knights. But if you instead go Scryers the same advice and numbers apply, change out for Scryer rep items.

Getting Revered with Cenarion Expedition allows you to purchase Glyph of Ferocity, a death knight’s best head enchant in TBC Classic. If you plan to run raids during pre-patch you’ll want access to this enchant. If not then you can skip this rep grind. Tanking death knights should also consider this, as Glyph of the Defender required Revered with Keepers of Time and a lot of dungeon spamming.

Your Death Knight shopping list is more than bags and gear. Several quests require tradable items to be completed. You can collect these items in advance so that your death knight can instantly complete the quest when they come upon it. 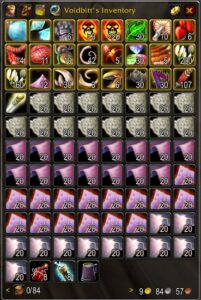 At the end of the death knight starter area, you’ll be sent to Stormwind or Orgrimmar to join your faction. While there you can turn in donations of cloth for XP. You can do this in up to five cities, but it’ll require travel time. Having a mage friend or tipping for portals are your best options.

While turning in donations of cloth you can also hit up local weapon masters for training. Death knights should only need to train maces as they’ll have proficiency with swords, axes, and polearms from the starter area (need to confirm on WotLK Classic beta).

If you’re willing to return to the plaguelands for a bit of early questing you can get some bonus XP out of collecting some turn-in items. Most require you to be Friendly with the Argent Dawn, which is where regular questing comes in.

Because of the added traveling and regular questing required collecting these items may not be on the fastest path for leveling. But consider the added perks before you make up your mind.

On your way to the Dark Portal and Outland, you can turn in several quests with only a slight detour. Find Bloodmage Drazial and turn in these items for a quick XP boost. The Draenethyst items are turned in to Kum’isha the Collector.

Turn off any auto quest turn-in addon you have. The first of each quest grants you XP, but they then offer a repeatable quest that does not. You don’t want to waste items by accidentally repeating a quest.

Aldor is the recommended Shattrath faction for death knights. But if you instead go Scryers the same advice and numbers apply, just change out for Scryer rep items.

Professions – A Priority for Your Death Knight Shopping List

You should consider stocking up on the mats needed to level up your professions. If going engineering you especially want to skill up ASAP, as you’ll have access to some nice goggles for leveling. 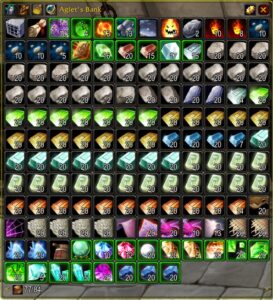 Professional Mats for engineering and jewelcrafting

You only need to skill up to 350 to learn Northrend recipes, many of which will be more cost-effective for skilling up if you’re willing to wait a week or two after launch.

Whatever main professions you choose you should check out this online tool to see what items to collect and store. You can also use it to stock up for cooking skills.

First Aid is the only profession death knights get a head start on. You’ll start at 270, saving you a lot of low-level cloth. You will not need to travel to Theramore for any training.

You can pick up the Outland first aid training books while leveling.

If you plan to skill up finishing these items will speed things up by ensuring more successful catches. But they are not required.

This is a complete list of BoE leveling gear I had on my own death knight shopping list. It is designed for unholy DPS questing but should work well with frost or blood DPS specs. I mostly focus on rare pieces, as they give the most value for their cost and it cuts down on my storage needs. Keep in mind the rare armor set out of the death knight starter zone is quite nice (Molten Core/Zul’Gurub level) and there are many great quest rewards throughout Outland. 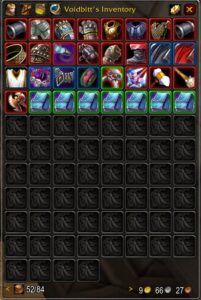 Cogspinner Goggles of the Beast – No level (Engineering)

Mask of Veiled Death – Level 67 (only if not an engineer)

Gauntlets of the Skullsplitter – Level 64

Boots of the Decimator – Level 60

If you want to get extra sweaty you can also apply enchants or armor kits to the BoE items you collect for leveling.

I didn’t forget a Riding Crop, you really shouldn’t need one.

These are the best consumables to use while leveling (for DPS questing in any spec). The amounts assume 40 hours played once out of the death knight starter area. That’s likely an over-estimation given the XP nerf we should see between levels 60-70. But the same consumables will work in Outland raiding and early Northrend leveling. 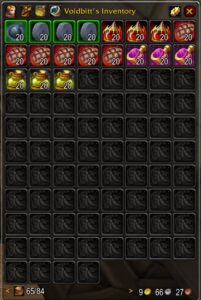 If you prefer flasks you can use Flask of Relentless Assault. If it is a DPS increase over the elixirs and will persist through death. But unless you’re dying a lot it will be much more expensive per hour than the two elixirs.

I’ve cut these numbers in half after the 50% boost to XP was announced. All death knights should be able to level to 70 in half the time. If you already have larger stockpiles you could always keep using these consumables going into Northrend.