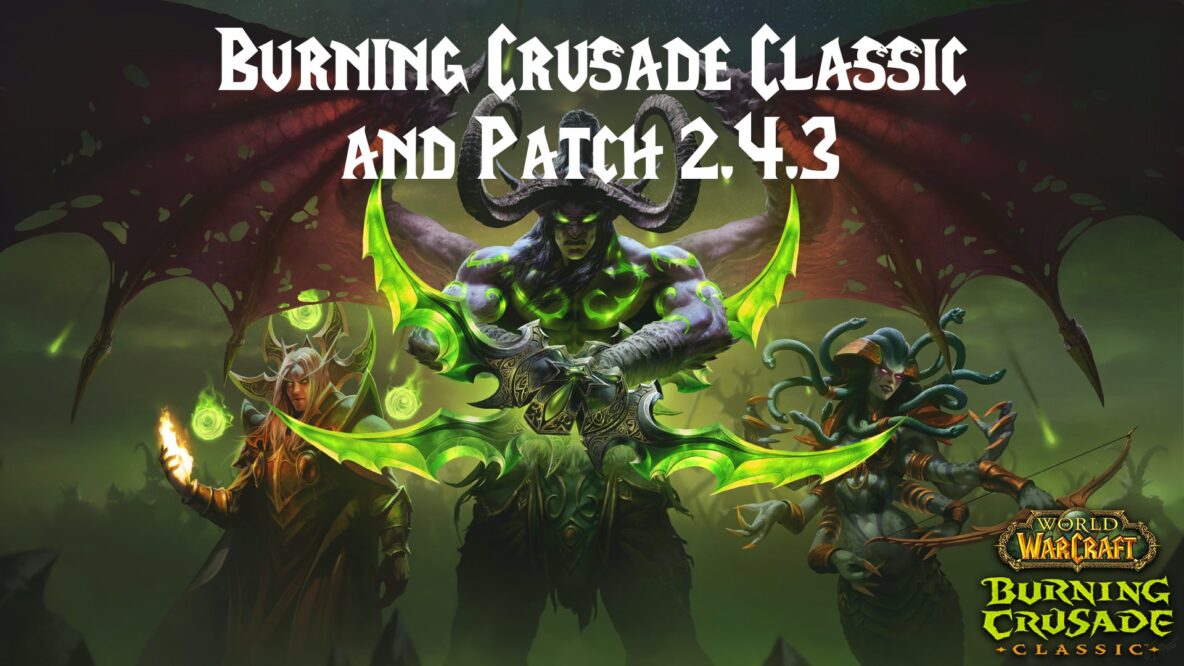 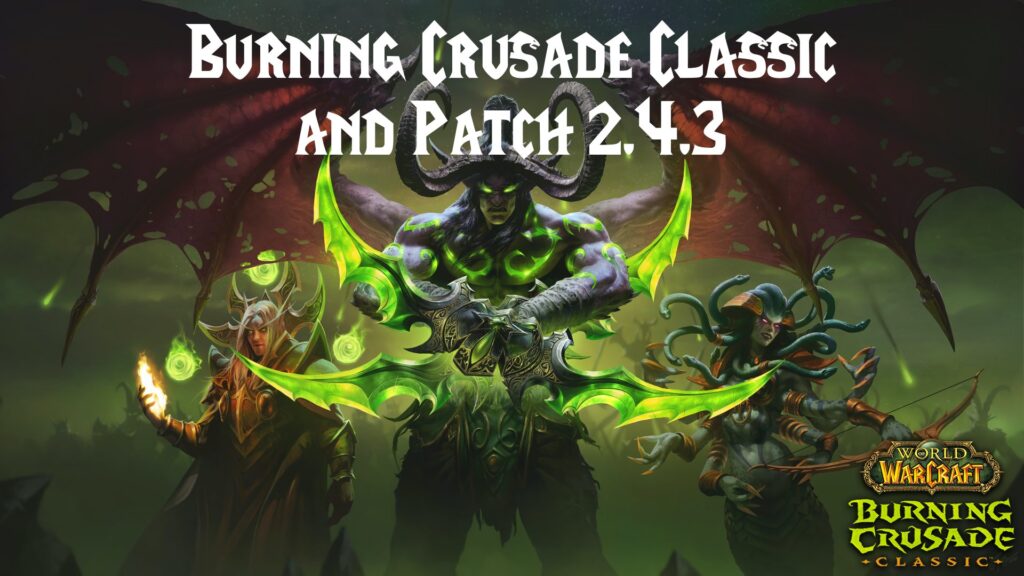 See all the confirmed details on Burning Crusade Classic, Patch 2.4.3, and more from BlizzConline 2021.

The Burning Crusade Classic pre-patch has been announced for May 18, 2021, and will run for two weeks before TBC Classic launches. The pre-patch will include all Patch 2.4.3 changes that affect players level 60 or under and Azeroth content.

What Is Expected With Pre-Patch

As a bonus Blizzard is making the new Blood Elf and Draenei characters available during pre-patch. This is a change from how TBC was originally when the new races were available only after the new expansion fully launched.

We don’t know if Jewelcrafting will be available in pre-patch or not. If it is available you will be limited to 300 in skill. The trainer needed to go higher is in Outland.

The launch of Burning Crusade Classic is scheduled for June 1, 2021, for North American servers. You can find specific launch times worldwide here. The launch opens the Dark Portal and makes Outland accessible.

What Is Expected With TBC Classic Launch

To date, I have not seen confirmation that the druid swift flight form will be available at the start of TBC Classic. In the original TBC the quest series was released in that will be Phase 3.

Not all content will be available on the first day, as TBC Classic is following a phased content plan similar to WoW Classic.

In the original TBC, attunement requirements were lessened over time. We may see the same in TBC Classic with future phases.

In Patch 2.3.0 several changes were made to reduce leveling time from 1-60. When asked about this during BlizzConline 2021, the developers didn’t remember the specifics but expected these changes would be in place at launch. They were for speeding up the leveling process to get to Outland.

These changes back in 2007 were expected to reduce the time to level up for Outland by 30% if you quested. If you opt for dungeon boosting you should see closer to a 15% reduction in leveling time.

At level 60 your epic ground mount will be cheaper than in Classic. Before it was 900 gold with an Honored discount. Now it’ll be 630 with the same Honored rep level. And a bit less if you managed to hit Revered or Exalted with your mount faction.

New Class Tuning Based On Patch 2.4.3

All classes will receive updated talents and other changes when the pre-patch arrives. All based on changes made up to and including Patch 2.4.3.

If you use any BiS lists or DPS spreadsheets be sure they are balanced against Patch 2.4.3.

The amount of changes varies by class. In general, every player should feel more powerful at level 60 during pre-patch than they were the week before. Specs that were considered less than optimal during WoW Classic will see the biggest boosts. By level 70 there won’t be any real meme specs left, as everyone will offer something valuable to a raid team.

Many WoW Classic era buffs, enchants, and items got nerfed during TBC. We expect to see all of these changes during the pre-patch, meaning they will affect your last couple of runs into Naxxramas. Note some of these changes only affect characters higher than level 60.

The ranked PvP system in WoW Classic goes away and is replaced by a currency system. Honor and battleground tokens can be exchanges for WoW Classic PvP gear without consideration of rank. So if a Rank 14 weapon is an upgrade for your level 60 you can run some battlegrounds and get one before heading to Outland.

The new Jewelcrafting profession is available during pre-patch. You’ll need to travel to The Exodar or Silvermoon to find the training. You’ll only be able to skill up to 300. 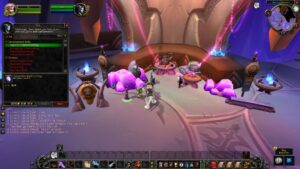 Arcanite Bar and Mooncloth creation no longer have a cooldown. You can make as many as you like, whenever you like. Mooncloth does still require the use of a Moonwell.

Other professional cooldowns, including the Salt Shaker and elemental transmutes, are now 4 hours shorter.

This charge was originally made so you could more readily log on about the same time each time and complete your cooldown. The 4-hour reduction gives some wiggle room should you log on late one day.

In Patch 2.3.0 the vendor discount system was revamped. In WoW Classic you get a 10% discount once you reach Honored with the vendor’s faction. You can also get an additional 10% (20% total) if you maintain PvP Rank 3 or higher.

The PvP discount will be removed when the PvP Honor system is revamped during pre-patch. Vendors will then give varying discounts at any reputation level above Neutral:

A 7th bank bag slot has been added for purchase, costing 25 gold.

All other bank bag slots have been reduced in their cost:

How Much Gold Do I Need for TBC Classic?

Guild Banks weren’t added to TBC until Patch 2.3.0 (linked to Phase 4 content). Blizzard has stated they will NOT be available at the launch of TBC Classic. But they plan to implement them before Phase 4.

Your guild officers will be thankful for a shared banking system they can use. But you can also leverage this new system for personal use.

Guild bank tabs get expensive fast, but they offer a lot of slots and don’t require the use of bags. In the end, it is more expensive than using several bank alts, but much less time-consuming.

Each tab offers 98 slots. Buy what you need to start. Remember gold is more plentiful in Outland, so tabs 4-6 will be more accessible after you’ve been level 70 for a while.

The druid quests to attain swift flight form were added in Patch 2.1.0 (linked to Phase 3 content). The dungeons used for those quests will be available at the Burning Crusade Classic launch, so the swift flight form may be available at launch. But I haven’t seen any confirmation it is currently on the TBC Classic beta. Keep in mind paladins and warlocks had to wait until Dire Maul was released in WoW Classic to get their class epic ground mounts. So Blizzard may require druids to wait, too.

With regular and swift flight forms expect the need to land to gather herbs. This was a change made during TBC and will likely be in effect at launch. You can still gather herbs without changing form, you’ll just need to land first.

Brewfest was added in Patch 2.2.0. Hallow’s End was also revamped, adding the Headless Horseman event in Scarlet Monastery and its sought-after drops. I would expect both to be available at the first opportunity after Burning Crusade Classic’s launch.

In original TBC attunement requirements were greater at the start of the expansion than at the end. As new content was released Blizzard made accessing older content easier for alts and new players catching up. If Blizzard follows that same path then this is when we may see attunement changes introduced in various content phases.

Badges of Justice are a new currency in TBC turned in for gear and other items. As TBC progressed the number of sources for BoJ increased. As did the number and level of the available rewards. While nothing was said about BoJ at BlizzConline we should expect a similar time gating of both receiving and spending BoJ.