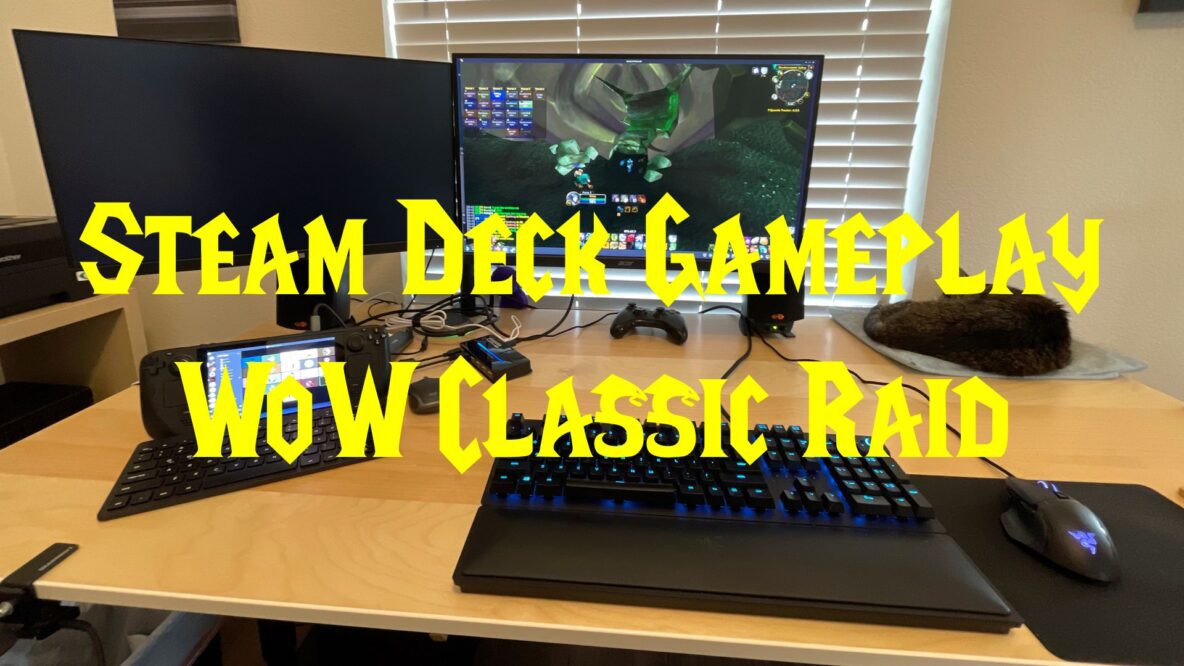 With WoW Classic installed on my new Steam Deck, I wanted to give raiding a try. Several gameplay videos and Reddit posts showed single-player action, but no raiding. So I replaced my gaming PC with my Steam Deck for one night raiding Black Temple in Burning Crusade Classic. Here is a sample of the Steam Deck gameplay and my experience while running a WoW Classic raid. 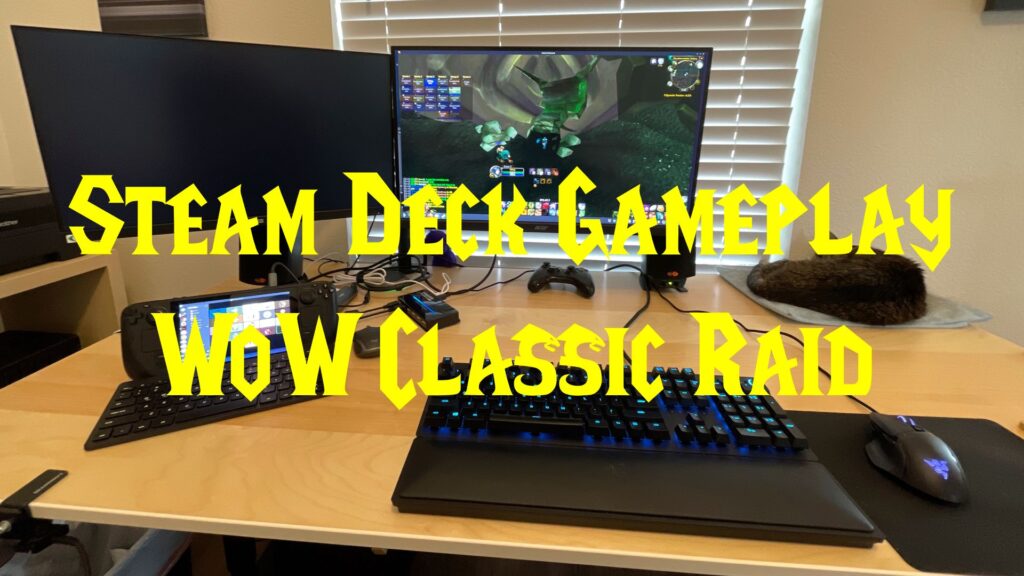 Warning: Explicit language in the video from guild Discord audio.

This was a guild run through Black Temple, specifically the Shade of Akama fight. It gave the best example of decent frame rates at the start and lower FPS near the end. Throughout Black Temple, I would range from 60 to 15 FPS, depending on the action and how the raid was situated in the room. More on that below. 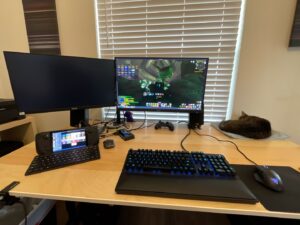 The Steam Deck allows for both handheld and desktop gaming setups. For testing Steam Deck gameplay with the WoW Classic raid I opted for desktop. Many other gameplay examples for WoW were in handheld mode and I plan to travel with a Bluetooth keyboard and mouse with my Deck.

WoW was on the 1440p display, Discord was on the Steam Deck’s built-in display. 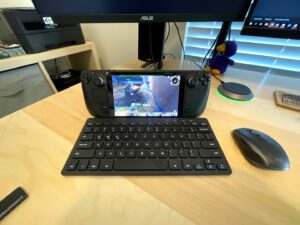 Overall the experience was fine. I made it through the raid and performed well, though not my best numbers (partly from setup issues, partly because I was focused on testing as well as playing). Opting for a keyboard and mouse made the run possible, especially on short notice. Video performance was good to adequate, I would want to drop down to a 1080p display the next time. And I would need to tweak some software settings before my next attempt, too.

Keeping the keyboard and mouse over trying to use the built-in controller is what made raiding feasible for me. I plan only to use the controller when using the Steam Deck to check my bank alt or run a few daily quests. I don’t usually run group content when I’m traveling, but with my travel-friendly Bluetooth keyboard and mouse it is as easy as doing so on my MacBook Pro. The biggest downside is the smaller display on the Steam Deck being too small for comfort when not used as a handheld. If someone wanted a better travel experience they could always get a portable monitor.

This is not to say using the controller and staying handheld is a no-go. The ConsolePort addon pre-dates the Steam Deck and I’ve run with raiders using it on your desktop. You’ll need to dedicate time to setting it up to your liking and getting used to it. I was fighting over a decade of MMO muscle memory when I was trying it out. But if you can get to a good point with that addon you could raid in handheld.

Frame rates ranged from 15 to 60. Much of the raid was in the 30-60 range, including some boss fights. The FPS got lower when the raid was bunched up together. The Teron Gorfiend fight has the worst performance, as we all crowd into his small space and spell effects are going constantly. But I didn’t run any performance issues that caused me to screw up or cause issues for the rest of the raid.

I believe going with a 1080p display in the future will improve performance significantly and would allow me to get above a 3 in WoW’s graphics settings. The smaller built-in screen runs well at 7, and WoW also recommends a 7 with a 1080p display. My guess is in a raid setting you’d want to come down 1-2 levels for better overall performance.

I had one hard freeze of the system which required a full restart. And with the Steam Deck it auto starts in Gaming Mode, so it takes a little longer to get back into Desktop Mode. But the boot times are fast and I was back with my raid after missing a few trash packs. The freeze happened during one of several times I was enabling and disabling the screen capture for this review.

I measured up to 110 F temperature on the back of the Steam Deck. The fan was constantly running and auditable sitting less than two feet away, but couldn’t be heard with the headset on. There were no indications of thermal issues from the Steam Deck itself.

My biggest annoyance was related to how the software was interpreting some of my keyboard inputs. I have Water Shield assigned to F12, which is also assigned on my gaming mouse. I was able to get a water shield up when I used the keyboard or mouse, but it also took a screenshot because F12 is the default key for that in Steam.

Likewise, when I pressed Shift to use my macros with a mod setting pushing the keyboard wouldn’t activate the action. If I clicked while holding Shift that worked, or if I used Control then the keyboard would work. Something was related to Shift, possibly the controller overlay Steam automatically applies. On Steam’s software keyboard Shift is connected to the L2 button.

The screenshot issue I was able to resolve on the fly. The other I expect I could deal with if I dug into it. Luckily my gaming mouse uses hardware saved profiles, so all my shortcuts worked without any setup. Linux support for gaming peripherals is hit or miss, so definitely try before you settle into a long period of gameplay.

How Is the Steam Deck for WoW Classic Raiding? 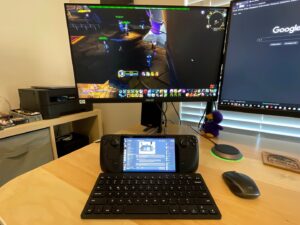 WoW and Discord running on Steam Deck on separate displays

The bottom line is it is fine. If you completed the install then you already got a keyboard and mouse connected to the Steam Deck, which is the minimum hardware extras you’ll want. If you want to go controller start playing with the ConsolePort addon and be prepared to put some time into it in advance.

The Steam Deck isn’t going to replace your gaming PC. So long as your PC has a decent, dedicated graphics card it wins just for running Windows (which WoW supports) and all your stuff is already connected and good-to-go.

It will beat most Macs, provided you can connect it to a larger display. My MacBook Pro runs WoW Classic fine, but it is always at graphics setting 3 and can stall under heavy graphic loads (such as a caster heavy raid). The only thing my MacBook Pro has on the Steam Deck in terms of playing WoW on the road is the larger built-in display.

If you don’t have a laptop then the Steam Deck will give you access to WoW away from home (and on the couch). The installation process is longer, but once done it is as easy as anything else. If you already have a gaming laptop and don’t want the handheld option then I wouldn’t recommend it. If you already have a Mac laptop (like myself) then it is 50/50… better gaming specs vs a bigger built-in display.