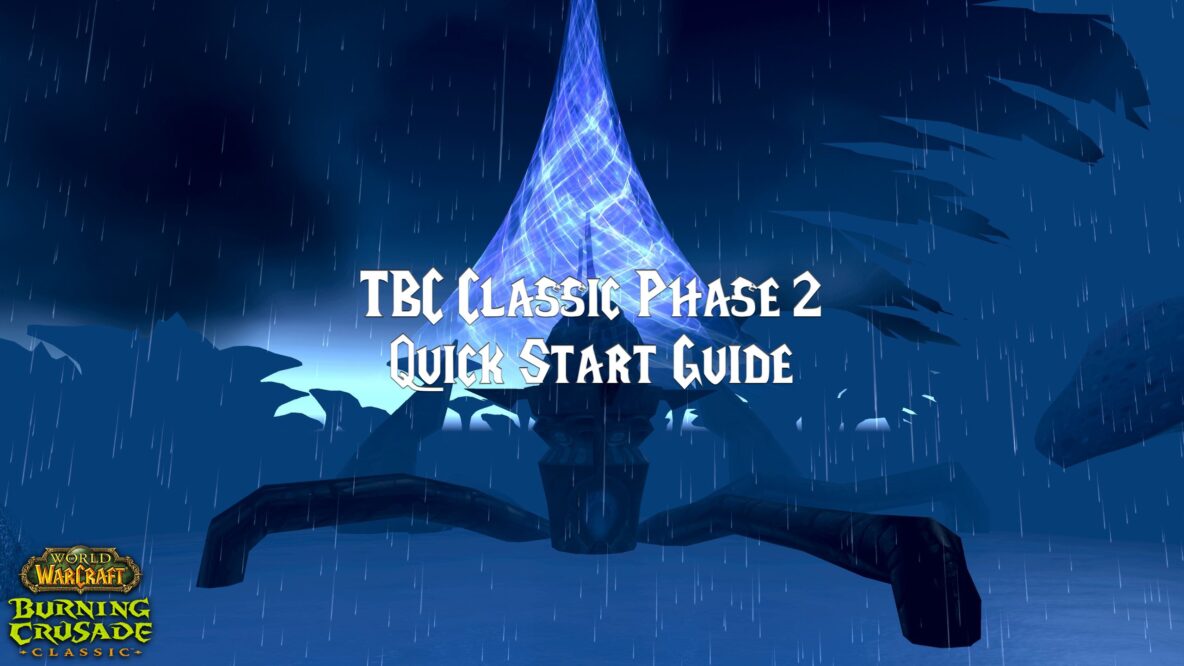 The Burning Crusade Classic Phase 2 (Overlords of Outland) is the first major content update for TBC Classic, most notably opening up two new 25-man raids. With Serpentshrine Cavern and Tempest Keep most raid teams will finally spend more than one day a week together, as they clear larger instances as a single force. These raids bring back resistance requirements for tanks and offer a chance to mix up your raid consumables checklist. This Burning Crusade Classic Phase 2 quick start guide will help you to know what new content is arriving. And what you may want to focus on before and after it is released. 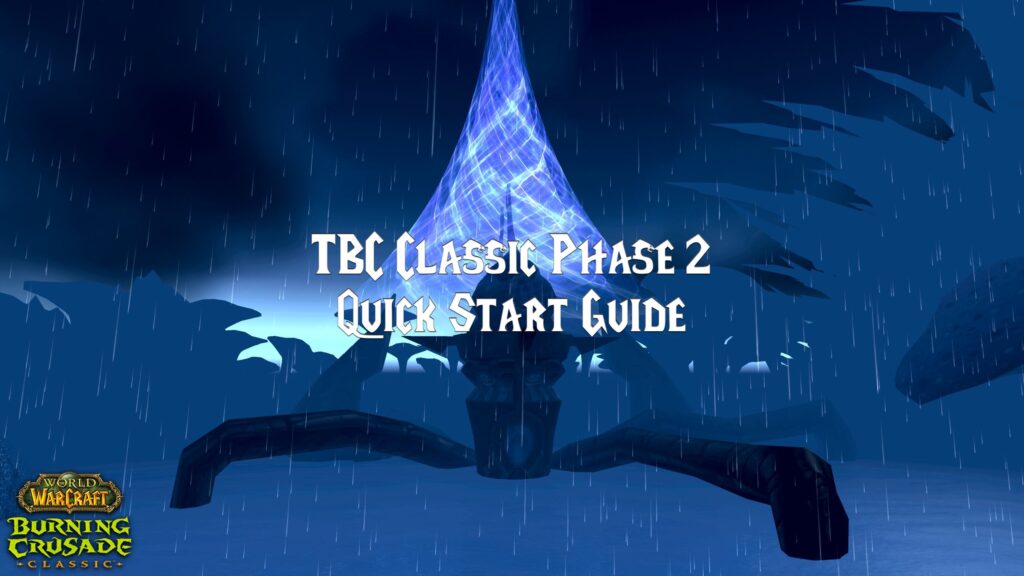 The Burning Crusade Classic Phase 2 is currently available on the Public Test Realm Classic server. You can copy over a character and check it out for yourself.

Serpentshrine Cavern and Tempest Keep are two new 25-man raids featured in Burning Crusade Classic Phase 2. In addition to new bosses and loot (including Tier 5 class armor), there are new attunements and other requirements for a successful clear.

As with Karazhan, there are attunement requirements for Serpentshrine Cavern and Tempest Keep. Both attunement quest chains are available right now.

SSC’s attunement can be done quickly if your guild regularly kills Nightbane and Gruul.

Tempest Keep’s attunement chain is long, so best to get started sooner rather than later.

Raid tanks and a few warlocks will want to have sets of resistance gear ready to go by the time you start running SSC.

All raid tanks will need to look into getting either a frost or nature resistance set for Hydross the Unstable. There are large sets for main tanks (one of each) and smaller sets for off-tanks. Now is a good time to figure out which tanks will cover which sets.

A raid tank, or more commonly a warlock, will also need a fire resistance set for Leotheras the Blind. Any plate-wearing tank can handle the job, but a warlock needs less gear.

Fire Resistance for Leotheras the Blind

Leothoras the Blind, Fathom-Lord Karathress, Lady Vashj, Void Reaver, and Kael’thas Sunstrider will each drop two Tier 5 tokens. This is a change from when SSC and TK originally launched, where only one token was dropped by each boss.

Mark of the Illidari

Mark of the Illidari drop from trash mobs in Serpentshrine Cavern and Tempest Keep raids. They can be turned in for flasks to Haldor the Compulsive by those allied with the Aldor or Arcanist Xorith if you are aligned with the Scryers. The exchange requires that you are exalted with either Aldor or Scryers and exalted with both Cenarion Expedition and The Shat’tar. Without the three needed exalted reputations, the marks can’t be exchanged for flasks.

The flasks are duplicates of craftable flasks already found in Burning Crusade Classic. They offer the same buffs for the same 2 hours and persist through death. These flasks can only be used in SSC, TK, Mount Hyjal, Black Temple, and the Sunwell.

Essentially the marks are a way to save some gold on flasks for Tier 5 and Tier 6 25-man raiding. They will continue to drop from the trash in Mount Hyjal and Black Temple. They are a green item, so master loot can easily pick them up. They should be distributed to raiders with the necessary reputations.

Fishing for the Lurker Below

Fishing Up The Lurker Below

There are instance limited mana and healing potions available for Coilfang and Tempest Keep dungeons. They will also work in SSC and The Eye (the name of the raid we all call Tempest Keep). You can stock up now and get some good deals on your future mana potion needs, not to mention have pots that stack higher than five.

The Tier 4 raids from Burning Crusade Classic Phase 1 will see some changes when Phase 2 launches.

Karazhan, Gruul, and Magtheridon will change from their pre-nerf version to a post-nerf version with the start of Phase 2. In the post-nerf version, both the damage output and the health total of bosses are reduced. Mechanics remain, but overall the bosses are less dangerous. Raid groups should expect faster kill times, and thus a reduction in how often they have to deal with boss mechanics. Running these raids should also be faster, nice given there are two new raids to also run during the week.

Expect many guilds to drop Karazhan from their regular schedule. Pugs will make up a large portion of Tier 4 raid runs in Phase 2 and beyond.

Guilds and players which haven’t been able to kill Nightbane, Gruul, or Magtheridon for their SSC and TK attunements will have a better chance at doing so in Phase 2.

High King Maulgar, Gruul the Dragonkiller, and Magtheridon will each drop two Tier 4 tokens. In Phase 1 (and originally in TBC) they only dropped one token each. The token drops from Curator and Prince Malchezaar in Karazhan are not noted as having a similar increase.

The Burning Crusade Phase 2 also includes updates for PvP, both casual and competitive.

Going by the loose schedule given at BlizzConline 2021 and the Overlords of Outland announcement Arena Season 1 will end with the release of Phase 2, and Season 2 will begin soon afterward. When Season 1 ends there will be a two-week “break” before Season 2 begins. During that period both S1 arena and honor gear will be reduced in cost and can be purchased. When Season 2 begins any remaining arena points will be converted to honor points, at a rate of 1 arena point = 10 honor points.

Season 2 will see the introduction of the Merciless Gladiator armor and weapons. Expect an exact start date to be announced by Blizzard in the near future.

PvP gear you can buy for gold will be sold by various factions in Outland in Phase 2. This gear was originally released alongside Sunwell in TBC. Its early arrival in Burning Crusade Classic will help players with an interest in starting PvP get geared up before their first battleground or arena match.

You will need to be Revered with these factions in order to buy the item they sell. Factions sell different slot items depending on the set you’re looking for.

A surprise addition to this Burning Crusade Classic Phase 2, new daily content associated with Ogri’la and the Sha’tari Skyguard is being released sooner than expected. This content was originally released alongside Black Temple.

Ogri’la is a group of friendly ogres in Blade’s Edge Mountains battling the Burning Legion. Gaining reputation will offer access to epics (lower ilvl than found from the Badge of Justice vendor or Karazhan).

The Sha’tari Skyguard is the air wing of the Sha’tar, in Shattrath City. Their reputation rewards include fall damage reducing cloaks for all, a nether ray non-combat pet, and nether ray flying mounts.

A new Group Browser Tool (aka Looking For Group tool) was promised for the Burning Crusade Classic and is being implemented in Phase 2. The tool is different from similar the one used in Retail and the one originally introduced in Wrath of the Lich King. The TBC Classic Group Browser Tool is more like a bulletin board and does not automate forming a party or getting to the instance. There are two tabs: Looking for Group (for solo players) and Looking for More (for group leaders).

By default press “i” to open the tool.

In the LFG tab select what type of group you’re looking for (dungeon, heroic, raid, zone) and which location you want. Solo players can add a comment, probably best used to advertise your spec/roll. When ready click List Self and you’re added to the list. Now you wait for a whisper and/or invite from group leaders. You can double-check your listing in the LFM tab.

The LFM tab is similar, selecting the type of group and location you and your group want to do. You’ll then see a list of matching players. Mouse over their name to see any notes. You can left-click a name to select, then click whisper or invite buttons at the bottom. Or right-click on a name for the same options.

If adopted by players en mass it’ll likely be the end of most LFG add-ons. Those work by monitoring chat channels to form a similar bulletin board listing. This tool bypasses chat channels for its own listings. Still, I wouldn’t recommend deleting your favorite LFG add-on until we see how well Blizzard’s in-house tool works.

Guild banks were originally introduced later in the original Burning Crusade, but their implementation was expected at the start of TBC Classic. So their arrival in Phase 2 is a reasonable compromise. 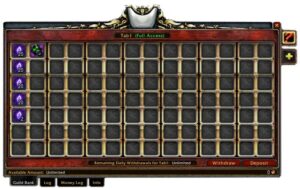 Guild banks are a big feature for guild leaders. They can stop hosting one or more bank alt toons tied to one player’s account and have a system all of the guild officers can access equally. It also helps automate many requests from members. If a single officer handles your guild’s assets they can continue to do that, with that player mostly managing the guild bank. But when they are away the guild bank allows the other officers to fulfill requests.

You’ll need to buy tabs. Each one offers 98 slots of storage, but their cost increases exponentially. So managing your items is important if you’re not willing or able to buy more tabs. All raiding guilds should buy the first four tabs at a minimum. That offers a total of 392 item slots for 1850 gold. Each tab can be set up with different deposit and withdrawal rights. Having at least four tabs will allow for basic organization.

The fifth tab has a much worst rate of return, offering 98 slots for 2500 gold. The sixth tab is even worse, offering the same 98 slots for 5000 gold. But the cost may be worthwhile if you need more storage space or want better organization across your tabs. All six tabs cost 9350 gold, but that’s less than 400 gold per player for a 25-man raid team.

Guild banks can be used by individual players, connected to a bank alt. You’ll need to form your own guild, which requires 9 other players to sign a guild charter. Offer to pay other players’ alts to sign your charter, then kick everyone once the guild is formed.

With a one-player guild, you won’t need to worry about deposit and withdrawal rights. How many tabs you should buy will depend on how much storage you need and how well you want everything organized. Unlike a guild-wide bank, you can continue to use the bag and bank storage already on your bank alt. In most cases, you are better off in terms of cost per slot maxing out your bank bag slots and upgrading your bags over buying the more expensive guild bank slots.

The beginning quest for the druid swift flight form chain is available on the Burning Crusade Classic Phase 2 PTR. This is welcome news for druids, as the quest chain wasn’t introduced until Black Temple was released in original TBC.

Druids will need to be level 70 and have 300 riding trained (5000 gold) before they can start. Head to Moonglade and speak with the druid trainer Loganaar for the initial quest. The quest chain ends with a run in heroic Sethekk Halls to summon Anzu the Raven God.

Anzu being available also means the very rare Reins of the Raven Lord will be available in Phase 2. Be nice to your guild’s druids, as only one who has completed the quest chain can summon the boss.

Crafting professions get new recipes from a range of sources.

New recipes for epic goggles for all classes and specs will be available through Outland engineering trainers (Lebowski in Honor Hold and Zebig in Thrallmar). All are ilvl 127 epic items which are BoP and required 350 in engineering to wear. They are the best in slot headpieces for many classes in PvE and feature increased stealth detection for PvP.

They drop from various elites connected to Ori’la events.