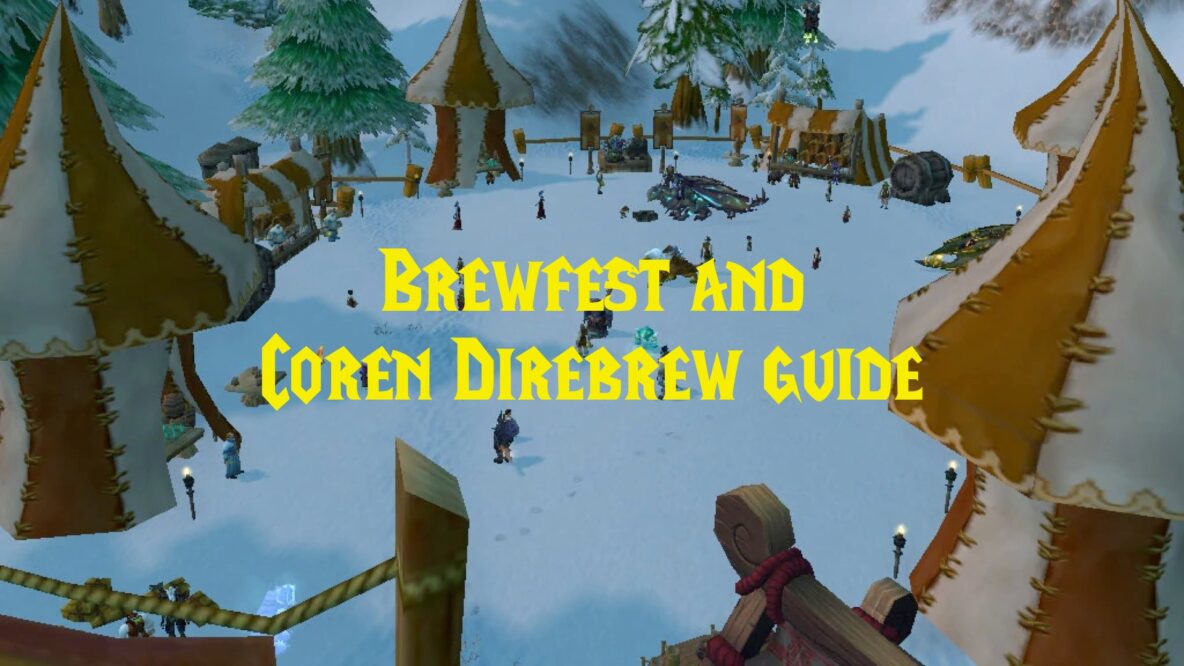 Brewfest is a major in-game holiday event, expected to run from September 20 through October 6, 2022. There are two major components to the holiday. Brewfest itself is found just outside Ironforge and Orgimmar. It contains new quests, dailies, and holiday currency to buy various cosmetic items. Coren Direbew is a new dungeon boss available during Brewfest who drops epic trinkets and special mounts. This guide will go over the basics of Brewfest and give you all the details you need to make the most of Coren Direbrew. 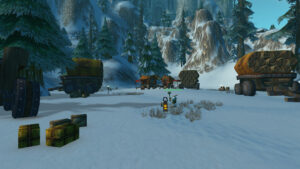 Brewfest is being set up outside Ironforge

Brewfest During WotLK Classic Launch Will Be Level 70

Brewfest for original WotLK was ranked up to level 80, with higher ilvl rewards from Coren Direbrew. But that was also in the middle of WotLK, not right at launch. So Blizzard is keeping the 2022 Brewfest to the level 70 rewards. And next year we’ll see a level 80 Coren Direbrew and good catch-up rewards for alts and new players.

Most Brewfest quests and dailies award Brewfest Prize Tokens. Those are the holiday event currency used to buy most cosmetic items available from Brewfest vendors. None of the available rewards affect gameplay, for those check out Coren Direbrew during Brewfest below.

Begins a quest allowing you to buy a Brewfest Ram (lvl 35+) or Swift Brewfest Ram (lvl 60+). Costs 600 tokens and is available to both Alliance and Horde (rams for both). You need to turn in the quest and buy your ram before Brewfest ends.

This item has been added to Brewfest in TBC Classic hours after the initial launch. It was available only during the 2007 Brewfest (the first year of Burning Crusade original) before Blizzard made several changes to the holiday the following year.

It is worth noting that 600 tokens are a significant sum for the holiday. Doing the dailies every day will net you 800+ tokens.

A full outfit will cost 350 tokens. All pieces are BoP, but the daily quests don’t have a level requirement so you can dress up your bank alt with some extra effort.

Both the Alliance and Horde version works the same, except for the result. Wearing the goggles changes all player and NPC models to the same thing from your point of view (doesn’t affect other players). Alliance players will see mostly naked male gnomes, while the Horde sees mostly naked female orcs. Consider who’s selling you the item.

The hops will turn a flying mount into a ground-only mount. No flying kodos, sorry. 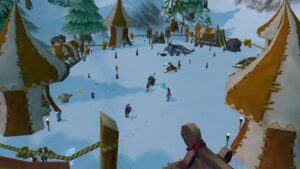 Here are all the Brewfest quests and dailies which award Brewfest Prize Tokens.

Loot a nearby Brewfest sampler and toss it at S.T.O.U.T. Repeat five times for your reward.

Now This is Ram Racing… Almost – No tokens, but needed to unlock other ram riding dailies

You’re given control of a Brewfest ram and will learn how to control its speed. You’ll need to maintain each speed level for 8 seconds.

There and Back Again – 10 Tokens

You’ll continue to learn how to ride a Brewfest ram, this time collecting three kegs from the circuit within 4 minutes. You have plenty of time and should practice the route. The next time you do this how well you perform directly impacts how many tokens you can earn.

Buy a bunch of alcohol from the local vendors and head out to the different faction cities. Once at the right spot drink until “drunk” (one level higher than “tipsy”) and you’ll see the pink elekks. Use the quest item on them.

After you kill Coren Direbrew for the first time you’ll receive Direbrew’s Dire Brew which starts a quest, turned in back at Brewfest. You’ll only receive this once.

It isn’t technically a daily quest, but you can do it every 18 hours. It is a repeat of There and Back Again, but this time you run as many kegs as you can. Speak to Ram Master Ray (Horde) or Neill Ramstein (Alliance). Really good runs can get 12 kegs (24 tokens), but more is possible.

Choose any of the rivaling breweries and ride around to various checkpoints in Ironforge or Orgimmar. The 4-minute timer is more than enough. The only difference between the breweries is the text you bark, you can try them all over a few days.

This can only be picked up soon after a Dark Iron invasion on Brewfest (which occurs every 30 minutes). During the invasion, players pick up and throw beer at the invaders to knock them out. Players must assist to defeat the invasion. When done a piece of Dark Iron Mole Machine Wreckage will remain on the ground. Anyone can loot it pick up the daily quest and turn it in immediately nearby.

Coren Direbrew is a daily boss found in Blackrock Depths during Brewfest. His loot is of interest to many level 70 players. You do not need to complete any other Brewfest quests first, though there is a breadcrumb quest that leads you to BRD. You can head straight to BRD and farm Coren first thing.

All but the two stamina trinkets are clones of trinkets available for Badges of Justice in Phase 1. They are good for saving you some BoJ if you don’t have the matching trinket. And some classes/spec may benefit from using both a Brewfest and BoJ version of the same trinket. 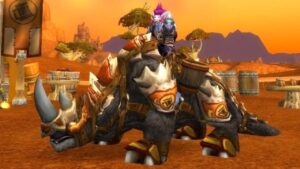 Getting To and Killing Coren Direbrew

Get To Blackrock Depths

Typical farming of Coren Direbrew during Brewfest has players forming a normal dungeon party and hitting the boss once per day. Your party can get in five kills with everyone being eligible for loot each time.

You and your 5-man dungeon party will need to get to Blackrock Depths (BRD). The summoning stone in Blackrock Mountain will not work for level 70s, so expect the trip and waiting for everyone to arrive to be the longest part of this daily event.

From Shattrath City portal to Ironforge/Undercity and fly to Thorium Point. Then ride to Blackrock Mountain and make your way down to BRD.

I expect warlock summoners will take advantage of the holiday and offer summoning services right to BRD’s door. Check Trade and Looking For Group chat channels before you make the long haul to the dungeon if you have some gold to spare. 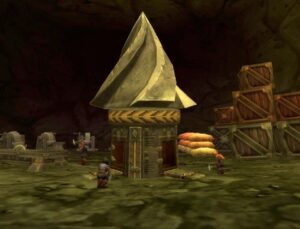 Once you zone into BRD there will be some dark iron dwarves to your right. Kill them and click on the devices they were near. A tunneling machine will come up from the ground and transport you to the Grim Guzzler, the bar in BRD. No keys or long runs inside the dungeon are necessary. Everyone at the party needs to click a device.

You’ll be dropped off right next to Coren Direbrew. Don’t worry, he’s friendly to you at this point.

Go outside the room and you’ll find the Brewfest Spy to the left. He has a daily quest that is required to fight Coren.

Turn in the quest at Coren, which starts the fight. Only one of your party members needs to do this per attempt. If you’re not the tank run away as soon as it is done. The tank can taunt Coren and his friends.

You can either focus on the adds or ignore them, provided the tank can keep them and it doesn’t stress out your healer.

Drilling machines will periodically come up, knocking back any nearby players. Adds come out and join the fight. You can fight, CC, or tank them as you like. The main thing is to keep them off your healer.

Brew Maidens will throw drinks at players. Drink it fast, or else when a second drink is thrown at you you’ll get “barreled” (essentially blinded).

All adds despawn once Coren goes down.

Coren’s main special ability is a whirlwind-like attack that disarms melee and does increased damage, best to run away.

A once-per-day per-character quest is needed to start the right, but all the loot drops for anyone in the party to roll on. So a group of five players can farm Coren up to five times per day for loot.

Coren and friends will respawn on their own after a few minutes, no need to reset the instance. Get your five attempts in for the mounts and remote then hearth home.

With a dedicated group, including a warlock, you can farm Coren indefinitely each day to try for his rare mounts and/or remote.

The trick is to provide a Coren farming service for level 65-70 players. Your team reserves the mounts and remote. The player being carried gets whatever other items drop. The person being carried benefits from a free trip to BRD and an easy Coren kill. Your group benefits from as many Coren attempts as you can find customers.

Get your team outside BRD, then advertise for free Coren Direbrew carries. Anyone level 65-70 can start the daily quest and participate. Make sure you list the mounts and remote as reserved, but the customer gets everything else.

Once you have your fifth member summon them and then head into BRD. Take the tunneling machine to Coren and instruct the customer to start the quest. Placing marks on the Brewfest Spy and Coren and using a macro for the text will help.

Your team handles the fight and revives the customer if needed. Any loot not reserved by your team goes to the customer.

The customer hearths out and you remove them from the party.

How you get out of BRD for the next summons (warlocks can’t summon into instances yet) determines how many attempts you can make.

If you reset to make a quick exit you will come upon one of the instance caps in TBC Classic.

Reset works by inviting a fifth character who is outside the dungeon, then making them the party leader. Everyone in the instance logs off, then the new party leader resets all instances. When the main party logs on they’ll be at the entrance of BRD in a reset instance.

If you run out and don’t reset you can get around the instance caps, but that will require someone in your group to have the Shadowforge Key (or a rogue). And of course, you’ll need to clear some trash between the entrance and the bar.

Either way, once you’re back outside of BRD you can repeat your ad and summon in a new customer.

Brewfest at WotLK Classic launch will be the first event whose achievements count toward What A Long, Strange Trip It’s Been. If you miss out on completing the achievements now you’ll have to wait a full year for another chance at your 310% speed Violet Proto-Drake.

Achievements To Focus On

You need to complete six achievements to get Brewmaster, which is the requirement of What A Long, Strange Trip It’s Been.

Brew of the Month

Have Keg Will Travel

Down With the Dark Iron

Does Your Wolpertinger Linger?