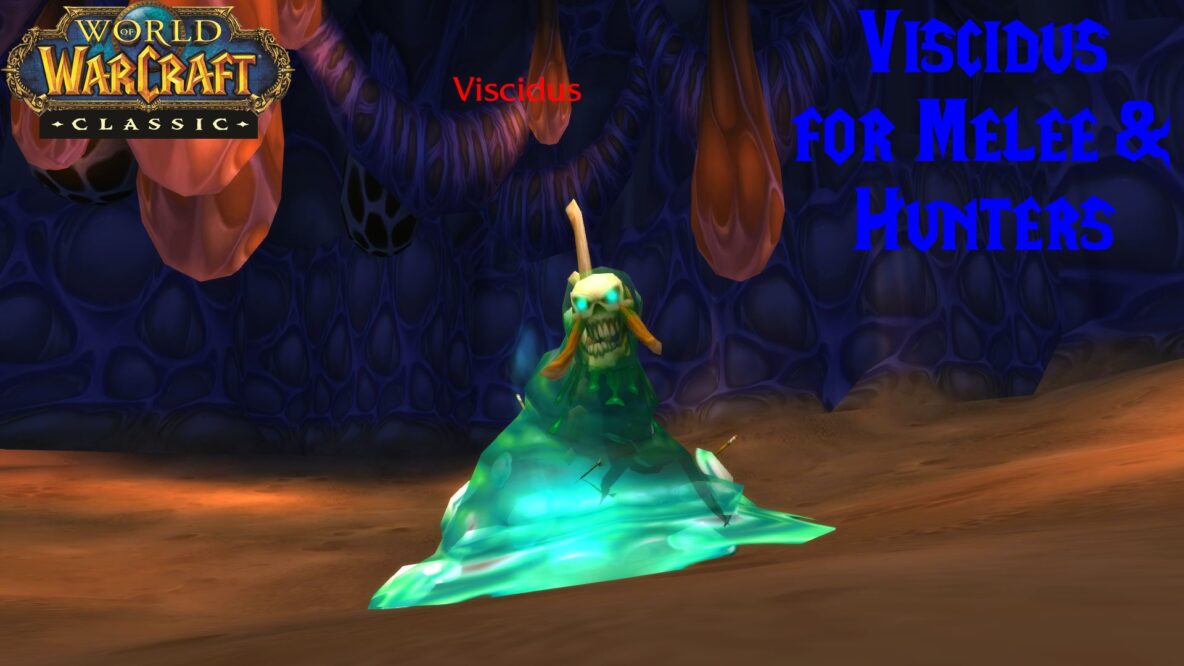 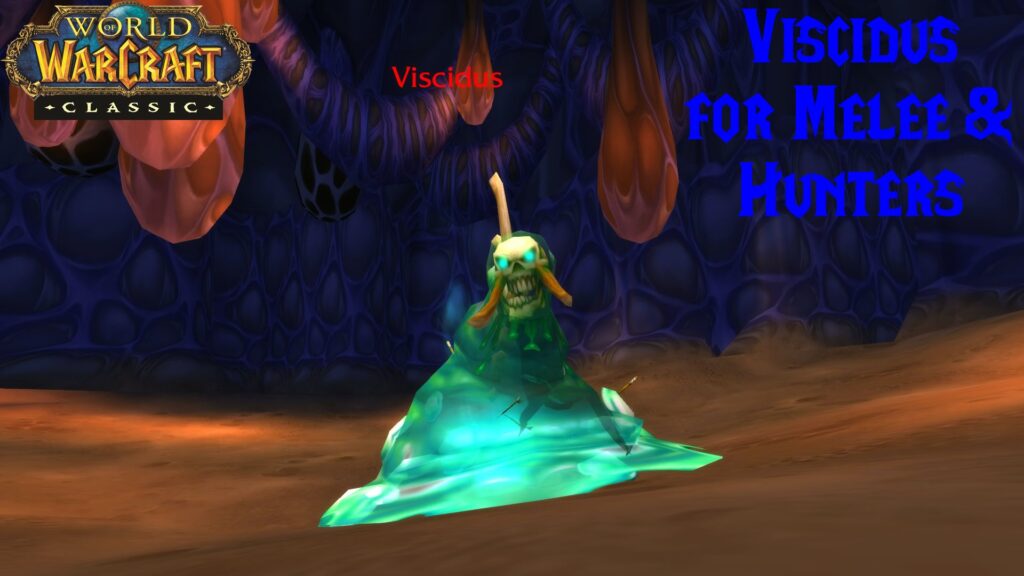 Viscidus is an optional boss in AQ40 which relies on having lots of frost attacks available. The traditional strategy is for mages and casters with frost wands to handle Phase 1. While melee and hunters sit outside the room to avoid damage. That works, but as a rogue it is boring. Have you ever seen DPS actually sit still for more than a few seconds? So I advocate for this strategy. Which allows melee and hunters in on the Viscidus for all three phases.

Update: Added info on certain weapons not procing while GCD is active.

The Viscidus encounter has three phases and repeats as such until dead.

Viscidus needs to be hit with 200 frost attacks. The amount of damage doesn’t matter, it has no impact on the boss’ health. The only thing that matters is landing 200 frost attacks as fast as possible. Typically mages use rank 1 frostbolt and other casters use any frost wand they have. The faster the better. Viscidus will be sending out poison volleys and sprouting up poison clouds at random players.

After 200 frost attacks, Viscidus is frozen. Now it is the melee’s turn. Viscidus needs to be hit with 75 physical attacks within 15 seconds. Failure means a reset to phase 1. Success moves you on to phase 3.

When Viscidus shatters from the melee onslaught he will break up into 12 globs. Each represents 5% of his total health pool. Now damage matters. Kill as many globs as possible before he reforms. Damaging a glob doesn’t count, only kills.

With proper weapons, melee and hunters can attack Viscidus during phase 1. And be able to better perform their own role in phase 2. I strongly recommend Coldrage Dagger. 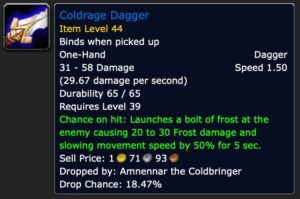 Coldrage Dagger fits the needs of phases 1 and 2 for rogues, warriors, and hunters. And is easy to solo farm. There are other options (see below). Some may be with better proc rates. But Coldrage Dagger gets the job done. And as importantly, it doesn’t take a lot of time, gold, or luck to get. Combined with Frost Oil melee and hunters will be able to help speed up phase 1 (get no illusion mages and wands still carry that phase). And the dagger’s 1.5 speed is ideal for landing as many hits as possible in phase 2.

The dagger drops from the last boss in Razorfen Downs. Rogues can stealth past everything and solo the boss. Others can skip most, if not all trash, and do the same.

Don’t forget to get Frost Oil to apply to your daggers. Check with your guild’s alchemist and buy mats to save some gold.

There is no need to enchant the daggers. No enchant offers any benefit for either phase 1 or 2.

Proc Issues While GCD Is Active

It has recently come to the WoW Classic community’s attention that many items will not do their proc while GCD (global cooldown) is active. GCD is active for 1.5 seconds after you use an ability. During that time landing a normal attack will have no chance of causing a proc. This greatly reduces the possible PPM (procs per minute) when fighting normally. And would explain the low proc rates many have seen from Nightfall and Sulfuras in combat logs.

Blizzard has also commented on this issue, partially confirming it. And indicating they have no intention of changing it.

How This Affects the Viscidus Fight

Coldrage Dagger and Frost Oil are both on the list of affected items. So fighting normally, or trying to use as many abilities as possible, will negatively impact the number of frost attacks you generate. So players using these items will need to change their play style for phase 1.

Rogues – Open with 1 or 2 Sinister Strikes and hit SnD. Then stop using any ability. Only do another Sinister Strike if you need to refresh SnD. There is an argument to be made for doing 5 Sinister Strikes and going with a 5 point SnD. You’ll less your frost procs at the start, but melee isn’t carrying phase 1 anyway. And it could leave you with SnD already running when phase 2 hits, which does have a time limit.

Everyone Else – Only do auto attacks during phase 1.

Here’s how the Viscidus plays out with frost armed melee.

The downside to melee in the room for phase 1 is there is nature damage going out at random. They could put more stress on healers than they’re worth. Wearing nature resistance gear may be an option, though it hurts total DPS for phase 3.

If you don’t include melee in phase 1 the Coldrage Daggers are still useful. Melee has to do phase 2, and your regular weapons are probably much slower.

Alternatively, you can buy two Poniard from a vendor if skipping phase 1.

Melee and hunters will need to swap weapons between phases 2 and 3 of Viscidus. You’ll need your regular weapons to damage the globs. There are a few options for swapping weapons in combat. But there isn’t one best solution for everyone.

This is the easiest option. But only works if using two different weapons. If you use two of the same weapon it’ll fail to equip the OH slot. As such this won’t work for putting on two Coldrage Daggers.

You can use a script to equip two of the same weapons. But they must be in designated bag slots for it to work.

Change the “4,4” in both lines with the bag coordinates you’re using. The first number is the bag ID (the main backpack is 0, each slot to the right goes 1, 2, 3, 4). The second number is the slot ID (count left to right, like reading a paragraph).

You can create a set for Coldrage Daggers and a set for your normal weapons. To swap in combat you must assign a keybinding to both sets. If you use a different gear swapping addon check it for how to swap weapons in combat.

Manually – Worst case you can open your bags and click on the weapons yourself. I suggest putting them in designated slots so you know exactly where they are. And where the swapped out weapons will go.

Other Frost Weapons for Melee and Hunters

The exact proc rates for these weapons in Classic is unknown. Any “best” lists I’ve seen are from private server testing, which is known to not always match up with Classic. At the end of the day, the Coldrage Daggers work fine and are the easiest for melee and hunters to get for Viscidus. Frost wands and mages are going to do most of phase 1 heavy lifting, regardless of your own min/maxing.

Glacial Blade – Horde only, available from vendor if Revered with AV

Hurricane – Ranged option for hunters. The original version used +frost damage and would not work for this fight. The Classic version uses separate frost damage, so the thinking is it will work. But this has not been confirmed. Hunters can always go melee for less cost and guaranteed results.

All Frost Wands – For priests and warlocks. Mana Channeling Wand from Dire Maul North is probably your easiest option.

Weapons with +frost damage attributes will not work. The game applies them as regular damage, they do not count toward a Viscidus freeze.