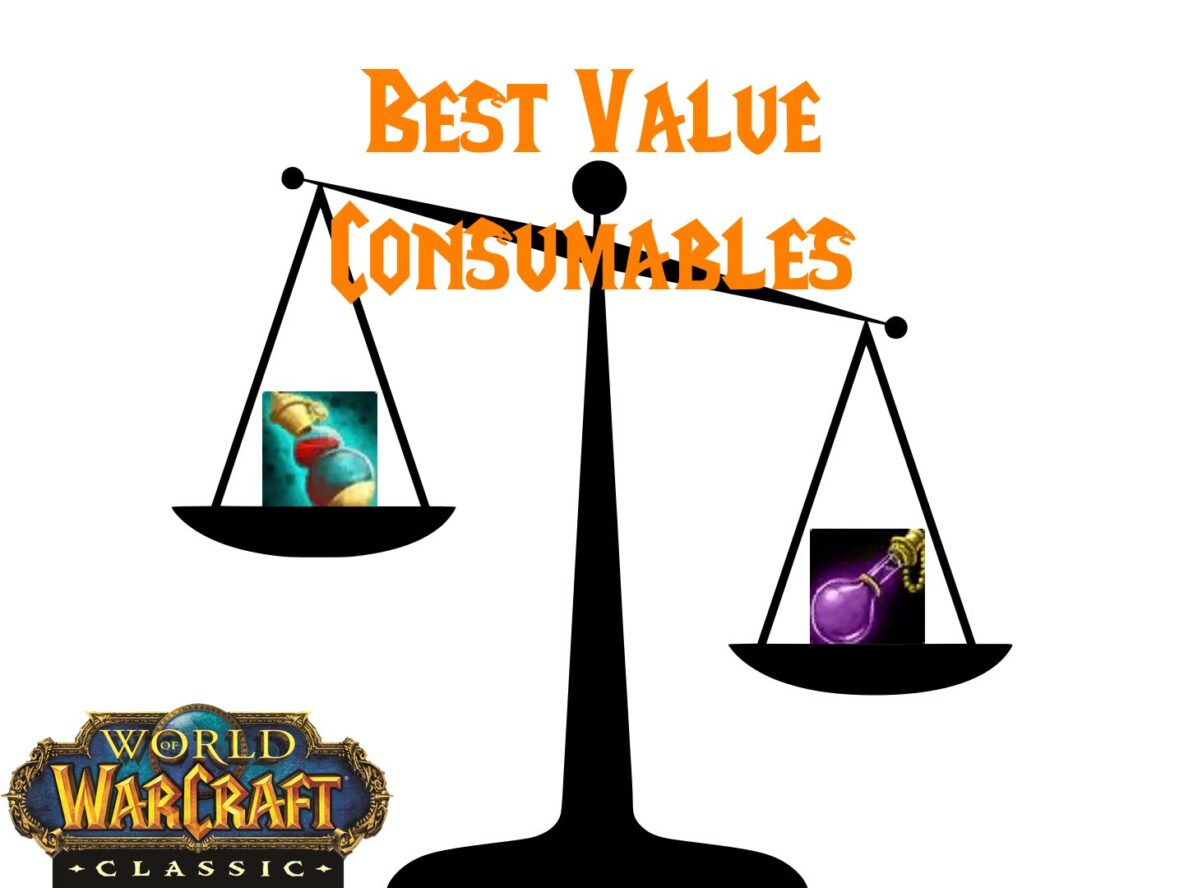 We know what the best, most powerful consumables are in WoW Classic. But what about the best bang for your buck? Or gold, in this case. This is for players who want to use consumables but aren’t able/willing to buy the BiS blindly. This guide goes over the best value consumables in WoW Classic. Comparing their benefits with their cost to make better, budget-friendly raid.

Thanks to my guildmate Deltà who came up with the idea of comparing consumables for Naxx prep. 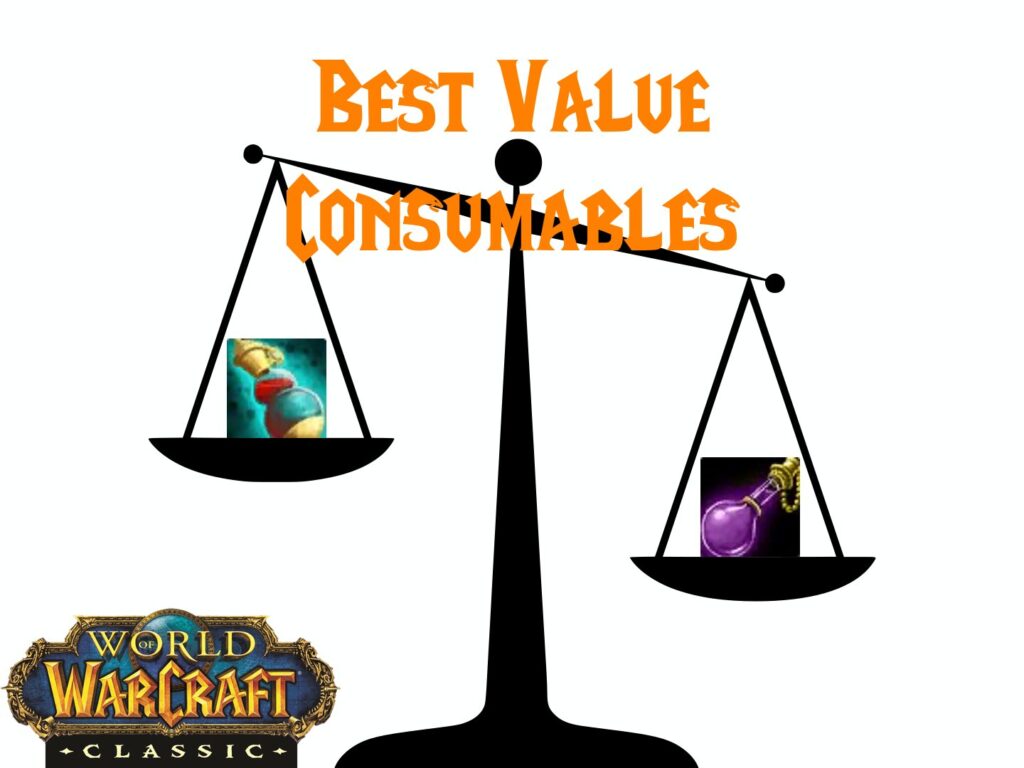 Using this to prepare for Naxx? Check out the Consumables for Naxxrama guide.

The cost used for all tables below is based on my own server (Pagle-Alliance) as of this posting. For flasks, elixirs, and potions I used the material cost, which is the cheapest option (assuming no related professions). Actual cost (and thus stats per gold) will vary between servers, as well as change over time. But the numbers here should at least give you a starting point to see the value difference between consumables.

You can always do the same comparison using your own server’s numbers:

Elixir of Greater Agility is the best value consumable here. But with 2% crit from Elixir of the Mongoose, it isn’t a completely fair comparison. For melee and hunters, there is no doubt Mongoose is far superior for DPS. But the cost of Plaguebloom on many servers makes Great Agility very attractive. If you have the means stick with Mongoose. But no melee, hunters, or tanks should be running with no elixirs given the great value of Greater Agility.

Grilled Squid is BiS for hunters. Rogues and warriors should compare it to the food offering strength options. If you only use food buffs for boss fights ignore the adjustment for time numbers. That is only a factor for those who run with full buffs through an entire raid.

You cannot stack Mongoose and Greater Agility. Nor can you stack food buffs.

Elixir of Giants is a best value consumable, hands down. If you want every bit of DPS you can get Juju Power does edge it out. But for everyone else, it is hard to argue with the big value difference between it and Giants. Especially on raids with no deaths.

Smoked Desert Dumplings is BiS for rogues and warriors. Blessed Sunfruit can be used without having to sit down. So if you run with food buffs the entire raid it may be a viable option during trash sections. Grilled Squid from the agility list above is also an option worth considering. The stat values favor Smoked Desert Dumplings, but your total cost per raid will be less with Grilled Squid.

If you only use food buffs for boss fights ignore the adjusted for time numbers. That is only a factor for those who run with full buffs through an entire raid.

You cannot stack Elixir of Giants and Juju Power. Nor can you stack food buffs.

Flasks are a poor value consumable due to their high cost. But nothing else comes close to offering as much stamina. And their persistence through death offers value not measured in the table above. You don’t use a flask because it is a good deal. You use it to get you over a hump, or because the smoother raid is worth the cost to you.

Overall Tender Wolf Steak is the best value consumable for stamina. For food buffs, it is hard to justify the BiS Dirge’s Kickin’ Chimaerok Chops compared to the other options. Is the extra 130 health going to keep you from dying? If you aren’t using Elixir of Fortitude already I’d do that and a cheaper food buff to get the same result for less gold.

Rumsey Rum Black Label is BiS, but Gordok Green Grog is a much better value. And you can buy it from a vendor inside Dire Maul North (though it may cost you gold to get into a cleared instance).

Elixir of Fortitude gives 120 health, but for comparison, I turned that into 12 stamina. It does stack with a Fortitude buff.

You cannot stack Dirge’s Kickin’ Chimaerok Chops, Monster Omelet, or Tender Wolf Steak. Nor can you stack Rumsey Rum Black Label and Gordok Green Grog. You can stack one food and one alcohol.

Juju Might and Winterfall Firewater are interesting to compare, especially over longer durations. You’ll want to check your own server’s costs to see if there is a clear winner. On my server, they are equal if you run with the buff for the entire raid. If only using them on boss fights then the best value is to use each at different times. Use Juju Might when fighting a boss with a lot of trash to follow, or high chances of death. Use Firewater when you’ll get to 2+ bosses within 20 minutes and have a low chance of death.

Flasks are a poor value consumable due to their high cost. But nothing else comes close to offering as much bonus damage. And their persistence through death offers value not measured in the table above. You don’t use a flask because it is a good deal. You use it to get you over a hump, or because the higher DPS is worth the cost to you.

For all DPS casters, the wizard oils are the best value consumables. Regular Wizard Oil has a huge value per gold spent. But Brilliant Wizard Oil outperforms it for all players with its 1% crit buff. It will come down to how much more are you willing to spend for top performance.

You can stack any of these elixirs together, and with a Flask of Supreme Power.

The best value consumables here are going to come down to what is needed to keep you alive. Dying costs gold in both repairs and other lost consumable buffs.

Healing potions are reactive, restoring lost health. Protection potions are proactive, preventing health loss in the first place. For fights with elemental damage greater protection is your best option for staying alive. Stick with the best if you have the means and deaths occur regularly in the fight.

But for fights your group has down with few deaths then the value per gold spent can come into play. Superior Healing Potion offers high value, assuming you can get away with its lower health restoration. Regular protection potions also offer higher value to their greater versions. Especially frost and nature, which have higher absorption rates than fire and shadow.

All potions use the same 2-minute cooldown. You can pre-pot a protection potion before a boss fight, as they last an hour or until used up.

Dark Runes (and Demonic Runes which have the same stats, but are BoP) offer much less value. But can be used after a mana pot as they are on a separate cooldown. Think of them as an emergency backup if needed.

Here I compared the total amount of mana each consumable could regen over its duration. Then applied that value against its cost, rather than give a value using equal durations.

Mana oils are the best value consumables here. While Lesser Mana Oil has a higher value per gold the loss of +25 healing is not worth the small gain. I would advocate always using Brilliant Mana Oil.

You can stack the Mageblood Potion, one mana oil, and Nightfin Soup together.