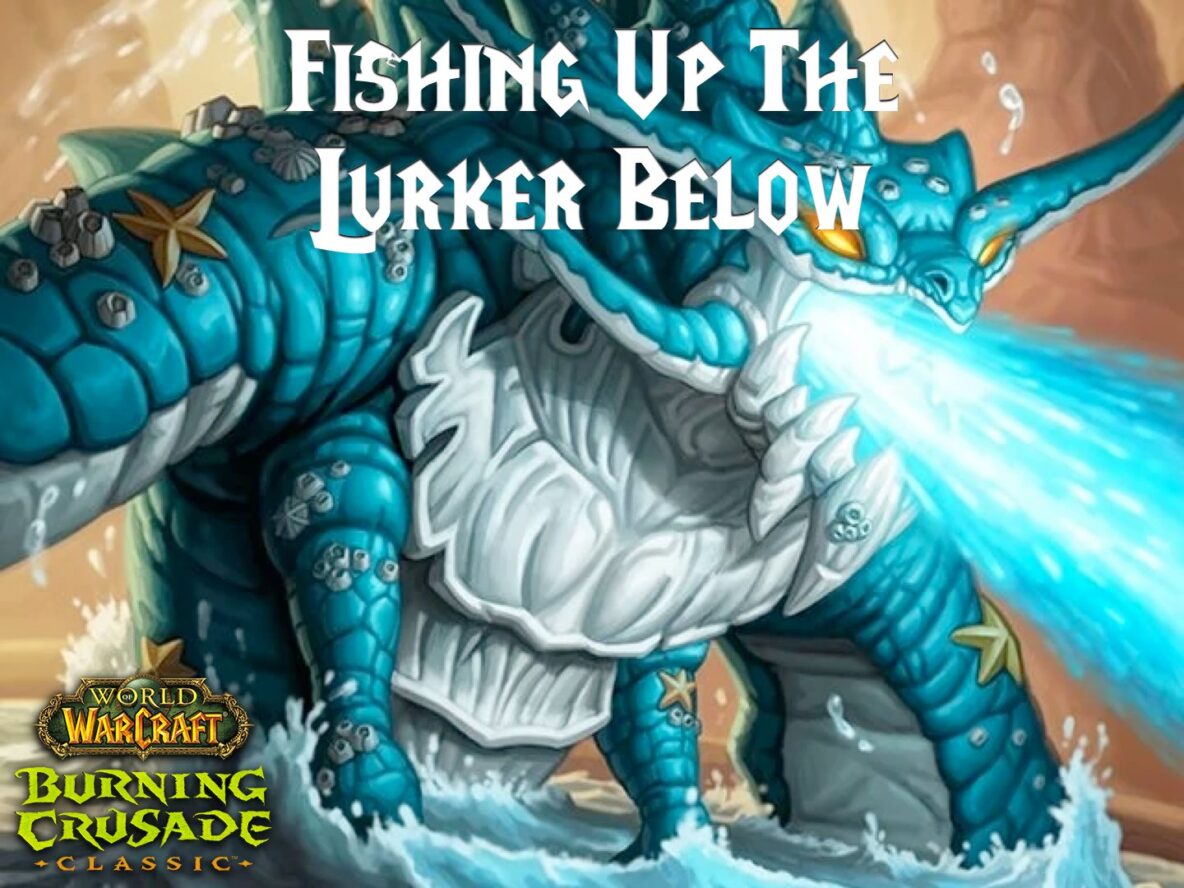 The Lurker Below is a boss in Serpentshrine Cavern. It is listed as the raid’s second boss, but he can be done first. The Lurker Below has a unique summoning mechanic, he needs to be fished up. Anyone can do it, but if you don’t want the raid sitting around for a few minutes you can speed up the process by having a few players with high fishing skills available. 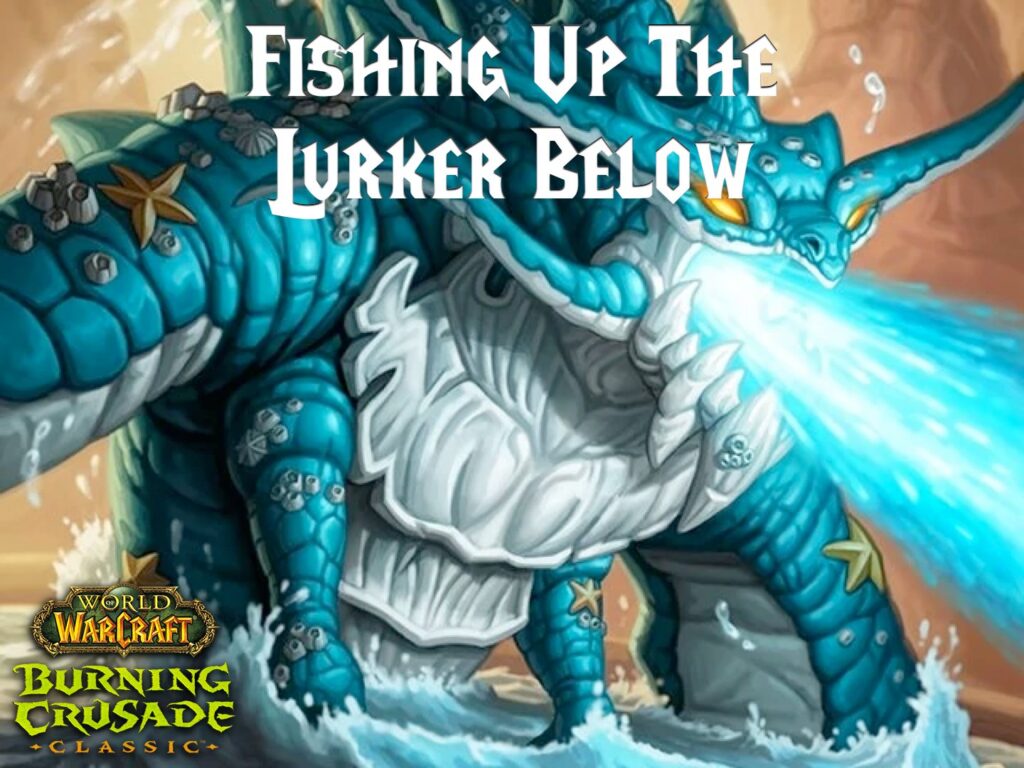 Fishing prep is not something all members of a raid team need to do. Having just one is enough, though having a few more helps keep things moving quickly. If you hate fishing don’t worry about it, one boss isn’t worth skilling up a profession you don’t like for hours.

Fishing Skill Requirement for The Lurker Below

Anyone can fish up The Lurker Below with a skill of 1 and your basic fishing pole. But I recommend having one or more raiders with 495 fishing skills to speed up the process. You can reach that skill level with max training and just two, easy to get items.

There is no minimum fishing skill requirement for casting into the Strange Pool where the Lurker Below lives. So anyone with the fishing profession and a fishing pole can potentially fish him up. But lower skill levels will result in more “got away” than catches, making the time to summon more of an RNG event. It could happen in the first few casts or after 8 minutes by original TBC accounts. Given each cast can last up to 20 seconds it doesn’t take many before your ready checked raid team starts to lose focus on the upcoming fight.

Dedicated fishers for a raid team should aim for 495 fishing skills. Assuming you’re already skilled up for TBC Classic fishing this is an easy goal to meet. It requires a minimum amount of gear swapping once the Lurker Below appears. And is more than enough skill to get a successful catch quickly. If several raiders are fishing at this level you’ll likely get a summon within the first 20-second cast timer.

If you don’t already have a fishing pole with +20 fishing skills (or better), pick one up. You have to use a fishing pole to summon the Lurker Below, so might as well use one that makes the job easier. There are easy options available to both Alliance and Horde players.

Seth’s Graphite Fishing Pole (+20 Fishing) – Second best fishing pole available for Alliance, reward from an easy quest in Shattrath City. Horde may want to check out the Angler FC-5000 below instead.

Big Iron Fishing Pole (+20 Fishing) – Tied for the second-best fishing pole for Alliance, a non-binding pole you can buy from the auction house and trade among your characters. Not worth the time it takes to farm one yourself, just get Seth’s pole.

Arcanite Fishing Pole (+35 Fishing) – The best fishing pole in the game, but only one person a week can obtain it. It isn’t necessary, any of the other poles above will work well and can guarantee you’ll have one in time for Phase 2 raiding.

Don’t equip other +fishing gear. You’ll need to swap back to your regular raid gear when the boss appears. You should have a few seconds to do so. But if you get stuck in combat you’ll only be able to swap your pole for your weapons. The few extra fishing points from other gear aren’t going to make a difference while fishing, and you’ll miss those stats a lot more during combat.

Get Some +100 Fishing Lures

These lures give your fishing pole a +100 fishing bonus for 10 minutes, more than enough time to bring up the Lurker Below. Once you’re at 375 fishing you’ll only need one lure a week for SSC.

Aquadynamic Fish Attractor (+100 Fishing) – A crafted lure from WoW Classic you can find on a few vendors or at the auction house.

Sharpened Fish Hook (+100 Fishing) – A consistent reward for completing the fishing daily quest outside Shattrath City. If only using these for Lurker you’ll only need to do the daily once every few weeks.

This macro will allow you to apply a lure to your fishing pole in one click.

Change the lure and fishing pole names as appropriate.

Like all other TBC Classic professions, you can get fishing up to 375 in skill. If you’re starting from 1 this can seem a bit daunting, but it is doable with enough time put in. Check out this fishing guide to help you get from 1-300.

Those who entered Outland with 300 in skill will also need to put a few hours into skilling up to the max level. You’ll see a skill up for every 4 successful catches on average. So the plan is to get as many successful catches as possible per hour.

You can get up to 330 fishing and more by fishing anywhere in Azeroth. I got my last 10 points while participating in the Stranglehorn Vale fishing tournament on my Draenei shaman. Given Zangarmarsh doesn’t offer any valuable fish going elsewhere in Azeroth is an option if you prefer. But you’ll want to return to Outland at 330 as you can get some fish worth more gold.

If you’re a healer or just prefer Golden Darter to other fish you can stay in Terokkar Forest and continue to skill up.

Fishing In the Strange Pool for the Lurker Below 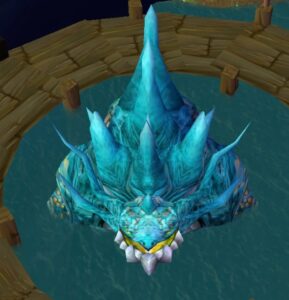 The Lurker Below is in the Strange Pool, which looks like a huge pure water pool found in Nagrand. The main platform surrounds the pool, with three other platforms nearby.

Ideally, your fishers should be people assigned to the main platform. There will be a few seconds between a successful catch and combat starts, but not enough to get safely back to another platform. Likewise, your main tank shouldn’t be fishing, they need to be ready to go without distraction or the need to swap gear.

You can catch the Lurker Below with any successful cast into the pool. You don’t need to hit the center or anywhere else special.

Several people can fish at once, which should speed up the process. But everyone fishing needs to be ready to swap out their fishing poles for their regular weapons quickly once the Lurker Below appears. Move to stop your current fishing cast and swap gear with a macro, addon, or fast clicks in your bag.