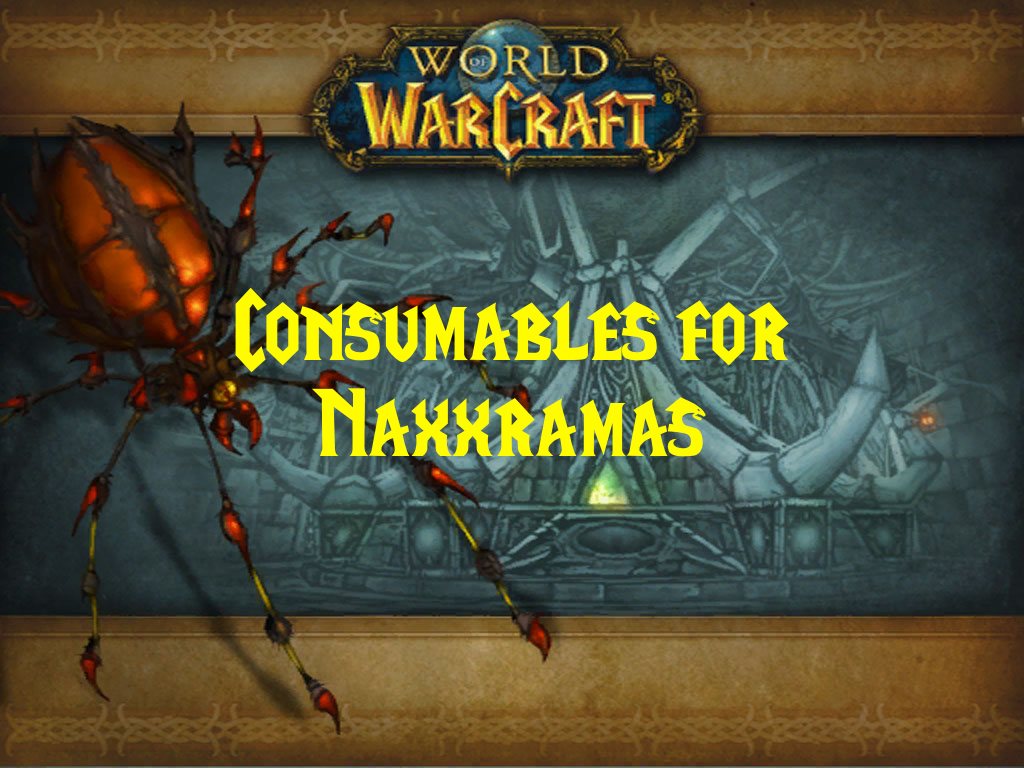 Naxxramas was designed to be “hardcore,” with the expectation that players would use all the tools available to them. Stacking consumables and world buffs was a thing in vanilla, just not as widely done as it is in Classic. The game devs knew this, and they opted to balance Naxx for a fully buffed raid. As much to keep players busy until The Burning Crusade is released as anything else. Here we’ll go over the consumables you should be considering for your own runs into Naxxramas.

Naxxramas Consumables for All

These consumables will help keep everyone alive through the various Naxxramas boss encounters.

The suggested amounts are for a mostly clean run through the entire raid. Likely you won’t use everything and will only need to top off your stacks each week. If still learning fights and progressing you’ll want to bring more.

Consider these optional and substitute consumables, depending on your needs and in-game wealth.

Anti-Venom, Strong Anti-Venom, & Powerful Anti-Venom (3 of each) – Elixir of Poison Resistance is the best option for removing poisons, as it has no cooldown. But you can substitute it with bundles of these anti-venoms. Each will work as well, despite their tooltip. And they are cheaper to make, getting more out of a Small and Large Venom Sac. They do have a 1-minute cooldown, but it is not shared between them. So you can use one of each inside the same minute. Note Powerful Anti-Venom requires 300 in First Aid.

Recommended and optional consumables for a druid, paladin, and warrior tanks.

Recommended and optional consumables for all healers.

Recommended and optional consumables for each DPS class.

Will Naxxramas Really Need A Lot of Consumables?

By most accounts, Naxxramas in vanilla WoW was tuned with consumables in mind. Previous raids balanced against standard raid buffs, not consumables or world buffs. With the notable exception of Twin Emperors in AQ40. Vek’nilash hit tanks too hard given the gear they had access to at the opening of AQ. Consumables became needed to increase their mitigation. My guild saw the same thing our first week running AQ40 in Classic. We went from wiping to a kill by getting consumables onto the warrior tanks.

Want another source? Check out this copy of an Elitist Jerks post about how overpowered consumables were in vanilla WoW, and how they forced a balance change in Naxxramas. Written by Ion Hazzikostas. Back then he was a member of a high end raiding guild in vanilla WoW and TBC. Today he’s also known as Watcher and is the Game Director for World of Warcraft.

In Classic raid bosses have gone down much faster than back in vanilla. There are many reasons. More player experience, known tactics, and enjoying end game class balances and itemization. We’ll likely see more guilds down Kel’thuzad in the first month than we saw in six months of vanilla. But Naxx (patch 1.11) is close to the version of the game we’ve been playing (patch 1.12). Fewer Classic players have experience with the original Naxx. Especially outside of private servers. And of course, the encounters in Naxx were balanced differently.

Expect consumables to make the difference between a wipe and a close kill for many guilds. At least until they get geared up with Naxx loot.

If any raid forces your guild to run with flasks it will be Naxxramas. They likely won’t be required by many guilds to complete the instance. But in the early weeks, they will give you a strong edge against a hard boss encounter. They can also speed up your progress through the raid instance. Naxx is huge, with 15 bosses. Fewer healing mana breaks and better caster DPS will speed things along.

Flask of the Titans

Flask of the Titans will be the most popular. During early progression having it on your tanks, 100% of the time gives healers more room to adjust. During the farm, it may still be useful for a while on Maexxna, Loatheb, Four Horsemen, Patchwerk, Sapphiron, and Kel’Thuzad. I recommend having plenty ready for your primary tanks. And keep in mind the extra number of tanks you’ll need for Four Horsemen.

Running Titans on all your melee 100% of the time will be overkill. If you can’t get through any of Naxx without everyone using Titans you have more basic issues to address. That said raid-wide use of flasks can help if struggling with Loatheb, Four Horsemen, or Sapphiron.

Flask of Distilled Wisdom needs will vary by boss and healer class. Paladins will have the least issues. Priests may have the most need. You shouldn’t need to run it on every healer for 100% of the time. Patchwerk, Sapphiron, and Kel’Thuzad are where you’ll most likely have mana issues. I recommend having some ready, but wait and see what you actually need and when.

Flask of Supreme Power is often looked down upon as only benefiting the quaffer. But extra DPS does benefit the group. And it can be the difference between a wipe and a close kill. Especially with Loatheb, Gothik, Four Horsemen, Sapphiron, and Kel’Thuzad. Keep it in mind as a bonus option, especially if you end up with an extra Black Lotus.

Will Flasks Be Required?

We don’t know if flasks will be required for everyone, some guilds, or not at all past the first few weeks. There isn’t enough good data from vanilla Naxxramas. On many private servers, they are recommended, but not always required. It depends on how hardcore the guild is. Classic has easier boss encounters than most private servers, so take that how you will.

My guild is being proactive, but reasonable in its preparations for Naxx. We are stockpiling Titans for our tanks and Distilled Wisdom for our healers. With the expectation of using up to 12 flasks per week total. We’ll have enough to go for that rate for months. Or use a larger amount during the critical progression weeks. We downed C’thun our first week in AQ40, so we’re expecting good early progress in Naxx.

Finding a Balance Between Fun and Progress

The issue with requiring a lot of consumables to run Naxxramas is the drain it places on the raiders. A weekly consumables list has to be obtained and in most cases every week. This means raiders need to log on between raid days and either earn gold or farm materials. Guild alchemists have to take in materials from guildies and craft large amounts of elixirs and potions. Activities that are not fun for all players. This is why Ion Hazzikostas called the consumables requirements for Naxx the worst grind in MMO history. You grind for hours, not for a reward, but to maintain the status quo of being able to run the current raid.

My Lists Attempt to Balance Need vs Effort

The consumables lists I use above are a balance between meeting the needs of Naxx and not overloading the raider. If you search online you’ll find another Naxx consumables list. Many with far more items listed. All those items are useful, but they add time and effort each week to put together. And may not be strictly needed to see success in Naxx.

That said, I believe some amount of consumables will be required for everyone going into Naxx. They offered too much benefit for the original raid developers to ignore any further. Consumables will be needed to meet expectations.

If you or others in your guild don’t normally run with consumables you need to start saving up for Naxx, right now. Starting before Phase 6 will reduce the weekly burden after Naxx launches. Stockpiling consumables or materials now will save you the sticker shock coming later.

Look At the Value of Your Consumables

We know which consumables are the best. But those on a budget may want to see the value difference between similar options. You can get more for your gold, even though you get less in total. Check out the Best Value Consumables guide to get a sense of where different food, elixirs, and potions line up with each other.

This Will Be the First and Last Time

On the bright side, this will be the last time you’ll need to put in so much weekly effort to run current content. During The Burning Crusade Blizzard recognized the issues with stacking consumables. Elixirs were divided between offensive and defensive, and you could only use one of each. Key mats for flasks were also more common for gatherers. Consumables will continue to be useful in Outland. But they won’t again be so overpowering that they change raid design.