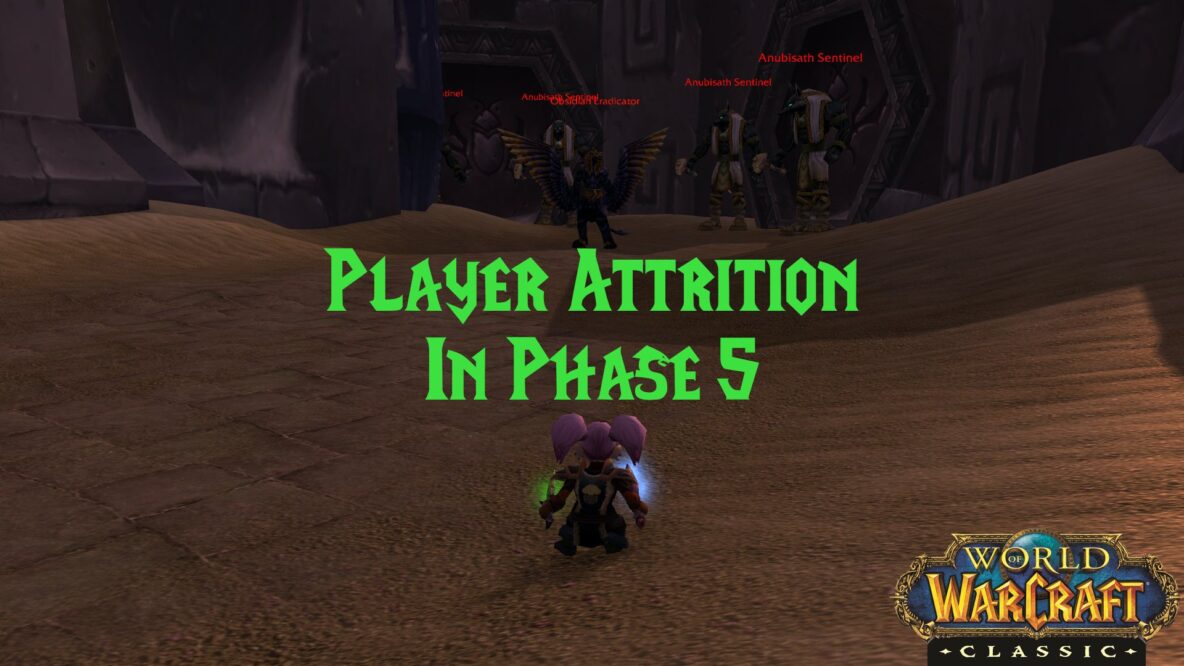 Many WoW Classic guilds are experiencing player retention issues. They are seeing fewer members logged on at any given time. And raid sign-ups aren’t filling up as well or as fast as they did back during Phase 3 and 4. Some guilds have less flexibility in what classes and roles are available. Others are having trouble getting 40 slots filled some nights. Player attrition in Phase 5 isn’t only affecting your guild. I’ve seen it in action with my guild, and it is affecting many in the game. Thanks to a combination of game content, time of year, and other real-life events. 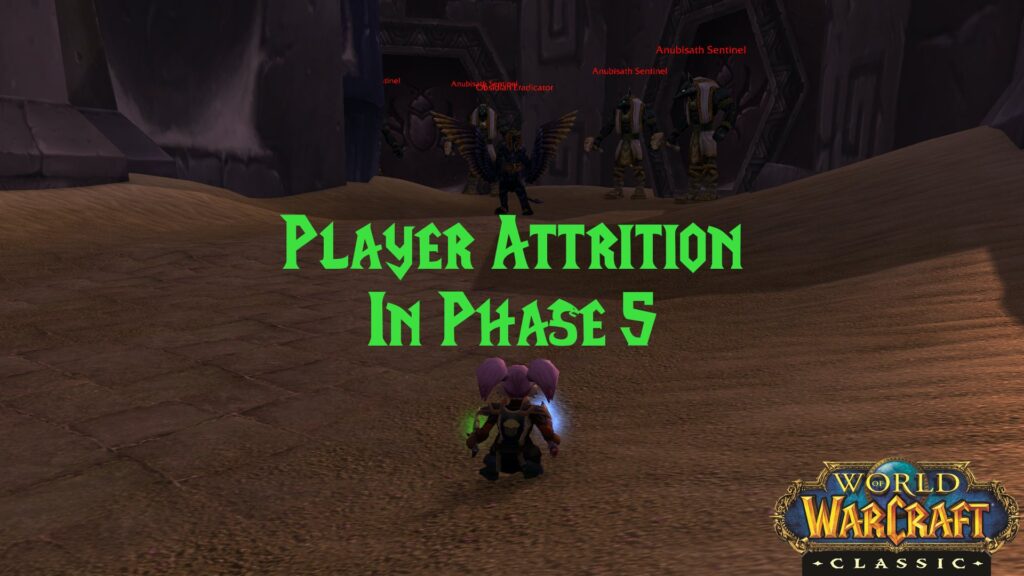 On paper Phase 5 offered a lot of new content and loot. But in practice players burned through most of it within the first month (August 2020). What’s left is a single raid which is hit or miss for good gear upgrades. Given this is also the start of our second year in WoW Classic and player attrition was bound to take hold in Phase 5.

The Gates of Ahn’qiraj event was a big hit for many players and servers (though not all). But the larger servers completed the event within two weeks. After a few weeks from Phase 5 launch, most players were done and had moved on to the new content made available.

Players rushed through the Silithus Field Duty requirements for new epics. As well as the Dungeon Set 2 questline, provided they could get dungeon groups. Some are working on these, taking their time. But you can see a difference in the number of players in Silithus now compared to August.

AQ20 isn’t as enjoyable a raid as ZG for many. But more importantly, it doesn’t offer anything to keep players coming back long term.

Everyone wanted their class books, but many are now available at the auction house at a reasonable price. AQ20 is the single best source of Cenarion Hold rep, offering ~2000 per clear. That’s what has kept me going back. But now many players are hitting Exalted and will be done with the rep grind.

The loot itself is aimed more toward alts and fresh 60s, acting as a catch-up raid like ZG. There are a few items raid mains would be interested in, but their drop rates are low. Once done with books and rep it is hard to justify running it 2-3 times a week for one item when you aren’t having a lot of fun.

Unlike ZG there’s no low supply, high demand items you can only get in AQ20. ZG has Primal Hakkari Idol for the BiS head and leg enchant for many players. It also has the tiger and raptor mounts which some are willing to farm for over and over. The class skill books are the highest demand items but can be sold and traded. With enough patience and/or gold you never needed to go into AQ20.

AQ40 has also been a disappointment for some players. The challenge expected for Twin Emperors and C’Thun wasn’t there. Almost 50% of guilds that killed a boss in AQ40 also killing Twin Emps and C’Thun in the first 10 days of release. That number shot up for the first month.

You may think having the raid on farm status sooner would be of benefit, but it has other issues. It is the largest raid instance in Classic to date. More casual guilds running Blackwing Lair in 90 minutes are seeing 3+ hour run times in AQ40. A lot of that is due to the trash, which is awful. Molten Core had too much trash by most accounts, but it went down fast. Blackwing Lair has great trash to boss ratio. AQ40 has a lot of trash, and much of it doesn’t go down easily. The Anubisath Defenders before Twin Emps take time, coordination, and can still kill you with RNG. The packs of Mindslayers, Champions, and Slayers after Twin Emps is also a PITA. Requiring the entire raid to focus on many pulls, and again RNG playing a big factor.

Then there’s the Tier 2.5 armor sets and other loot. AQ40 definitely has some big upgrades for some classes. But for others, there isn’t a lot being offered. Hunters have very little, with their top priority item also being eyed by melee. Druids, paladins, and priests also have hit or miss upgrades. That’s up to half the classes in the game who might question the value in doing a 3+ hour run with several trash deaths every week. On the bright side, the rep grind for Tier 2.5 pieces isn’t too bad. Most players hit Honored within the first month for no extra effort.

On lower population servers guilds will face a new threat: active players transferring. If a guild has trouble running raids some players with means will look elsewhere. And a high population server looks a lot more stable.

Guilds on the higher population servers will be able to recruit these players, combating their own inactive player ranks. A geared and experienced 60 will always be preferred to a fresh 60 and newer player.

The seasons have always had an impact on online gaming. Summer is a low point for MMO subscriptions, with vacations and other activities. The transition to fall brings nicer weather to more places. We’ve seen less of that this year due to COVID, but in a way that has magnified the difference when people are away.

The past Labor Day weekend saw a big spike in travel versus the last six months. The TSA reported a new high in the number of airline passengers since March. While even more Americans took to the road than flew. You undoubtedly noticed people missing for some or all of the three day holiday weekend. After months of being cooped up and canceling earlier travel plans a lot of folks just felt the need to getaway.

Schools starting up are also a factor. We don’t know how much effect it has on those doing remote learning. But many schools are trying for in-person classes again, and we know that reduces playtime for many.

The world has a lot of chaos going on this year. COVID-19 and lockdowns boosted WoW Classic’s numbers back in the spring, but things keep changing.

The job market is in flux, with people both continuing to lose jobs while others are finally going back to theirs. Starting back at work after months of income uncertainty resets your priorities. Unemployment offers a lot of time to play, but you also need to reduce your costs. Job hunting takes more time and effort for the hardest-hit sectors.

Over 10% of Oregon’s population has been evacuated from their homes due to wildfires. West coast servers are seeing player attrition, not from Phase 5 content, but real life.

There are no signs that things will be back to any sort of normal for a while. We should expect IRL issues to continue to come up at a higher than normal frequency.

More Player Attrition Yet To Come

The Shadowlands expansion launches on October 26. Some current Classic players will head back to Retail for the pre-patch event and new expansion. Players who try to balance between both games will become raid loggers in Classic. Raid loggers in your guild have the highest chance of turning into inactive players. On the bright side, we could see a return of players from Retail later on. As recent WoW expansions have shown to run into their own content issues until their second major patch.

Phase 6 will bring its own issues. At the start, there’ll be a boost to players ready to get into Naxxramas. Something the majority of Classic players never did in vanilla. But Naxx isn’t expected to take months to finish as it did back in the day. Based on the previous raid launches up to 35% of guilds doing Naxx could clear Kel’Thuzad within 10 days. Naxx is supposed to be harder, and we don’t know if the average guild can overcome Sapphiron without building up frost resistance gear. So maybe it’ll take weeks, but it won’t be months.

Once Kel’Thuzad is down that’s the end of the game for some players. They’ve beaten the final challenge and there’s nothing new to do. At least not until The Burning Crusade Classic. Others will want to keep running Naxx for their Tier 3 gear. And that gear is good for leveling up in Outland, but it isn’t required.

It doesn’t help that not a lot of extra content is included with Phase 6. The Scourge Invasion will be over within weeks. New world PvP events won’t hold interest for long, especially on unbalanced servers. And other new items will be skipped or won’t take long to get.

How To Deal With Player Attrition

The best way for guilds to deal with player attrition is to recruit. Guilds on larger servers and with current content on farm status will have the easiest time. There are still new players coming into the game and reaching level 60. Experienced players are now able to transfer to any other server. And some are bored with one class and wanting to main a new one, but there may not be a slot in their current guild.

The best way to recruit is to organize and run pugs, mostly for Molten Core, Onyxia, ZG, and AQ20. You’ll draw in players who want to raid, see them in action, and show them what your guild has to offer. But this takes a lot of work.

Other options include whispering guildless level 60s. As well as keeping an eye on Blizzard forums and other social media sites with a WoW Classic community. Expect to bring in a lot of new members to get only a few regular raiders with this process.

Guilds who start to lose too many players during Naxx will have a second option: close down raids until TBC. At some point recruitment in Phase 6 won’t balance out the loss of players for some guilds. If members like the guild for more than raiding then a controlled shutdown could allow the guild to linger until TBC. You’ll still lose some members who really want to keep running Naxx. But by keeping the guild intact you can drawback lost players for the next expansion. And on the bright side raiding requirements drop from 40 to 25 in TBC. So a full recovering of players isn’t necessary to be in a position for TBC raiding.