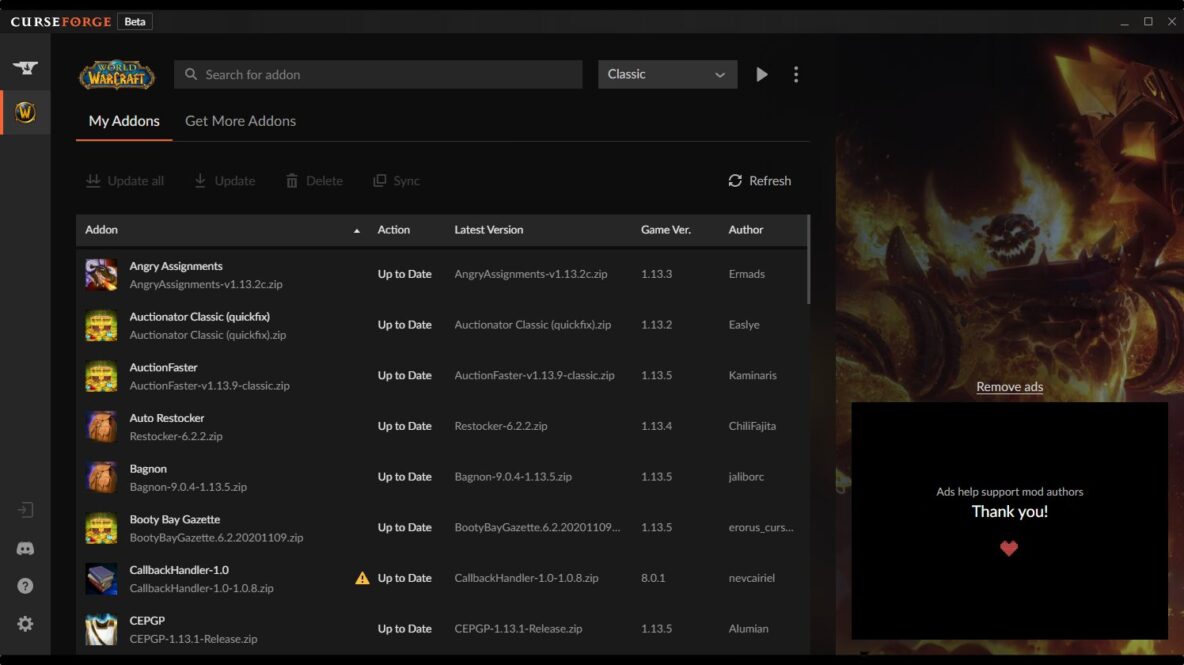 CurseForge has been the most popular World of Warcraft addon repository through much of the game’s history. It has taken many forms as it has gone to different owners. It has once again changed hands, this time going from Twitch to Overwolf. As a result, all WoW and WoW Classic mod support in the Twitch app will soon come to an end. Ahead of that change, Overwolf has released a beta version of their new CurseForge app. Here are an overview and my review of how Overwolf is taking over the CurseForge legacy.

CurseForge is a popular mod repository dating back to World of Warcraft: The Burning Crusade. It was originally a part of Curse, a network of gaming sites focused on addons for MMORPGs like WoW.

In 2016 Curse was acquired by Amazon, through its subsidiary Twitch. Curse was put under CurseForge, which became the core of Twitch’s game mod system. After that many WoW players moved from using a discontinued CurseForge app to Twitch’s own app for addon management.

In June 2020 Overwolf bought CurseForge from Twitch and Amazon. Overwolf is a software platform to help developers create extensions for video games. Some are game neutral, such as having a web browser or IM chat in an in-game overlay. Others are specific to certain games. CurseForge’s addon system for World of Warcraft and a dozen other games makes it a good fit.

In early November 2020, Overwolf released a beta of their revitalized CurseForge app, as part of the Overwolf platform. On December 2, 2020, Twitch is ending all game mod support and has started to encourage users to migrate to Overwolf’s new CurseForge app.

The new CurseForge is not a stand-alone app, though it acts like one once installed. It runs on top of Overwolf, though you can get both with one installer. You can choose to dig into Overwolf more and take a look at their other features. Or you can ignore it and it won’t bother you except to run CurseForge when you wish.

If you use Twitch for addons already the new CurseForge app will copy over many settings. After my install, both WoW Retail and Classic addons were already separated and listed. No setup was required on my end.

Overwolf itself is not supported on Mac. But on the CurseForge website, there is a macOS download listed as coming on November 17. That should give you plenty of time to transition to their Mac solution before Twitch ends its support. With the lack of Overwolf on Mac, I’m expecting that version of CurseForge to be a stand alone app.

At the time of the acquisition, Overwolf said their plans were to keep CurseForge much as it was on Twitch at the start. Then over time, they would add their own touches to it. So far that seems to be the case. The new CurseForge app is very like Twitch’s setup. Some changes and additions have been made, but for the better.

The biggest change is the separation of Retail and Classic addons is much more clear. At the top of the WoW addon, windows is a pull-down menu showing either Classic or Retail. Much better than Twitch’s version, which could not be read at a glance.

CurseForge has also added warning icons for addons needing attention. Most often it warns an addon might be corrupt and offers a solution, often to reinstall. After my install, several addons were marked with reinstalls advised. It also showed me a dual install of Details I then addressed. Currently, two libraries and TSM’s AppHelper still have warnings. But as far as I can tell there’s no issue with them, and reinstalling doesn’t remove the warnings. 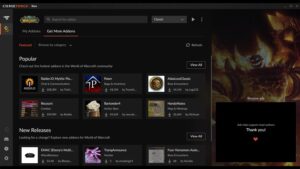 Finding new addons is about the same as before. Again it is easier to tell if you are looking at Retail or Classic addons. The categories and search functions are the same as on Twitch.

The other big change to the UI is a large section on the right with game art and ad space. Currently, no ads are running, but they will in the future. This gets into the monetization differences between Twitch and Overwolf. Twitch used CurseForge to get more users to download their app. Which leads to more viewers of streaming content and the ads associated with that part of the service.

Overwolf relies on direct ads, subscriptions, and app purchases. There are no plans to charge for WoW addons, so the app will run ads to make money. Users can opt to remove the ads by subscribing to CurseForge for $3/month. Overwolf reports that 70% of ad and subscription revenue goes to mod creators. So while you may not like having ads at least the people who create addons are getting rewarded. The ads will only appear in the CurseForge app and will not be in-game.

The other big change from Twitch is the settings. On Twitch there were next to no settings, nothing of any real use. On CurseForge there are several new options for the app and WoW addons specifically.

Under Addons, you can manage auto-update settings. I did not have much luck with addons auto-updating when set to 1 hour, but it worked better at 30 minutes. I also gave the Backup Space as much as possible. I’d gladly give up a mere 10MB for better backups.

Under WoW specific settings you can set up auto-update and how addons get deleted. At the top, there is a pull-down menu for Retail and Classic. You can have different settings for each game. The window defaults to Retail, so be sure to change it to Classic if needed. I missed that and had to redo my Details settings when I fixed a double install issue CurseForge found.

On Twitch a total of 13 games had mod support. The new CurseForge app has all 13 games listed, but currently, only WoW is available. The rest are marked as “coming soon.” Hopefully they will gain support before Twitch stops working.

So far Overwolf has done a good job with the new CurseForge app. Especially if you were comfortable using Twitch. The install was easy and brought over game and addon settings. There are no radical UI changes other than the coming ad space. What changes have been introduced are improvements. That said more changes are expected, so we’ll have to wait and see what the future holds.

Overwolf has to be installed, but the system isn’t trying to force me to use it more. A shortcut to CurseForge is added to the desktop. Or you can launch Overwolf from your programs list, then click on the CurseForge icon in the hud. I’ve had Overwolf running in the background of my gaming PC for months without issues. But you can set CurseForge to close itself and Overwolf when you close the window if you prefer.

The inclusion of ads is a turn off to many on paper. But in reality, how much time do you spend in your addon manager? The ads only show up in the manager window, to the side of where you are working. No ads will appear inside the addons or in-game. And WoW addons developers now have a possible revenue stream. Not the worst ad compromise I’ve seen. And you can always pay $3/month to remove the ads and still support the addon authors.

After a week of running the beta app, I’ve happily moved my WoW addon management from Twitch to CurseForge. I don’t know what the future of CurseForge is, or how it’ll further integrate with Overwolf. But I’m happy with the start. Overwolf itself hasn’t bugged me about using it more. I did install their web browser extension to work as an overlay when gaming. But honestly, I keep forgetting about it and keep tabbing out or going to a second display. As long as CurseForge keeps its stand-alone feel Overwolf itself won’t cause issues for players.

Why the Hate for Overwolf?

When the CurseForge deal was first announced hate for Overwolf by some players came out. Most of the reasons people gave were the same: malware, bloat, ads, and monetization.

Doing my own search I wasn’t able to find evidence of malware or viruses on Overwolf. There was a false positive incident that OW needed to deal with. But there wasn’t any actual malicious software found. What some call spyware is standard user tracking done by all ad-based services.

Bloat or slowing down systems from any source is often on a case by case basis. I’ve experienced no issues since running Overwolf for the past 4-5 months. But others report issues. It is something you can look for, and if you suspect it uninstalls Overwolf to see if the issue goes away.

Ads and monetization are definitely present. Overwolf is a for-profit company offering a service to gamers. They draw in users with their services and then sell ads targeting those users. That includes gathering data on users for better ad targeting. This is no different from Google, Facebook, or any other online ad-based business. If you’re against that practice that’s fair. Don’t install Overwolf and move on to an alternative option for managing your addons. But if you use other ad-based online services Overwolf isn’t going to do anything new.

Not everyone was happy about the news Overwolf had acquired CurseForge. And some players avoided the Twitch app because of issues it has had in the past. So there are a few alternatives for addon management out there if you are interested. But don’t expect the same level of polish and support as what CurseForge is offering.

CurseBreaker – Windows and Mac clients available. The EXE needs to be installed in the WoW or WoW Classic directory and WoW launched once before it can be used. The interface is text-based, with no GUI or mouse function.

Minion – Windows and Mac clients available. It can support WoW Classic, but it doesn’t auto-detect it as a separate game. You’ll need to add WoW Classic as a new game manually. Support and updates from addon authors vary.

WoW Matrix – Windows and Mac clients available. The Windows download is not secure, your web browser will prevent the download of the EXE file unless you override it. That was enough to stop me. There is no mention of Classic support on their site or FAQ.

WowUp – Windows and Mac clients available. Supports separate WoW clients, including Retail, Classic, Beta, and PTR. Mac client is listed as a beta, but Windows has both a stable and beta version available.