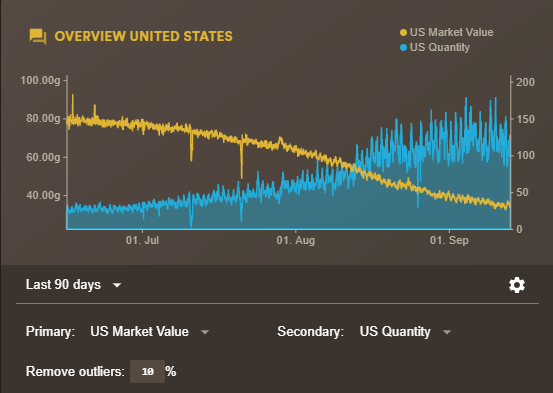 Arcane Crystals have been dropping on most US servers for a month now. On my server, Pagle-Alliance, they were around 80 gold before Phase 5 launched. Now they’re around 38-42 gold. And we’re on the higher end of the prices for US servers. The regional median is closer to 35 gold. That makes now a good time to gather any Arcane Crystals or Arcanite Bars you need for future needs. Whether for crafted gear or getting ready for Naxxramas. There may also be room for some profit-making, but I wouldn’t put everything you have into cheap Arcane Crystals.

Arcane Crystal prices and quantities for the last 90 days on US servers | Source: Nexushub

Update: A few days after this post Blizzard made changes to Dire Maul East to help address bot activities. The mining nodes now only spawn after the imps break out of the tunnel during the last boss fight. This stops bots from clipping through and mining. Another bot ban wave was also announced. As of a few days after the changes, I have not seen a significant price change on my server.

Why the Steady Price Drop?

There are several ideas on what is causing the price drop. In truth, it is probably a combination of things. That’s usually how things work in economics. If you are looking for a simple answer it is the same one that usually accounts for any price drop: increased supply and reduced demand. We saw this at the start of Phase 5, and it has only gotten worse since then. Helping to make now a good time to stock up on the Arcanite you’ll need in Phase 6.

Too Much Supply from Phase 5 Launch

At the launch of Phase 5, Scarab Lord rep farming kept Thorium veins in Silithus tapped almost as soon as they spawned. This pattern continued after the Gates of Ahn’Qiraj were opened. Players working on Field Duty quests kept the same hives occupied for an extra couple of weeks. By now Silithus is less occupied on most servers. I can go into a hive on the highly populated Pagle and find lots of bugs and few players. So there isn’t a continuing oversupply of Arcane Crystals from these sources, but they contributed to the early changes in prices.

Some trash mobs inside AQ20 and AQ40 drop mining nodes. Those have a chance of dropping an Arcanite Crystal. Larger servers see a decent increase in crystals from regular raiding. Without that same raid content requiring Arcanite for anything.

New Phase 5 content didn’t produce enough new Arcanite demand to keep up with the increased supply. Titanic Leggings became available, requiring 12 Arcanite Bars. But the demand was low, as they weren’t as much of an upgrade for active raiders. And many players who did want them already had mats saved up. The Scarab Lord quests also need a stack of bars, but again most people were already prepared. Even those working through the quests for the rewards now are limited to usually 1 per guild per week. Anyone who had stockpiled Arcanite expecting to make a profit only added to the oversupply.

Under geared characters have been reported using a fly or teleport hacks to move around Dire Maul East and Zul’Gurub. Both good sources of Thorium veins and Arcane Crystals. They make their way to the Thorium veins without being attacked, then dump a high number of crystals on the AH.

Do a “/who zul’gurub” on your server, then sort by the guild. If you see a bunch of guildless mages those are likely bots.

These are bots have been active on US servers for a while. Ban waves help, but they keep coming back until the next one. They are the biggest reason US and EU prices don’t match up, the US has a bigger bot issue.

Another ban wave against bots from Blizzard would help normalize the market. But a lot of the damage is already done. Players who needed Arcanite now have it. So while a lower supply would bring prices up there won’t be much change to demand until Phase 6 gets announced.

Now Is the Time To Get Your Arcanite

Now is the time to stock up for your own Arcanite needs. Many players will need 2 Arcane Crystals for Naxx attunement if Revered with Argent Dawn. Newer characters may need 5 if you are only Honored. Everyone will need at least one Arcanite Bar for their frost resistance set. And everyone will need some combination of crystals and bars for their Tier 3 armor. Mail and plate wearers needing a lot more.

If you’ve been wanting a Lionheart Helm now is also the time to go for it. Increased Thorium mining is affecting almost all its material costs. Or if you’re still trying for legendary weapons out of Molten Core consider stocking up on the needed Arcanite.

There is an opportunity to turn a profit, but you need to be careful. I would not recommend stockpiling a lot of crystals or bars. Yes, demand will likely go up when Phase 6 dates get announced. But how much demand will depend on how long these low prices remain and how many people prep for Naxx early? The demand will also be fleeting. The materials needed for Naxx attunement and gear is one time only for most players. Not to mention not everyone who kills Kel’Thuzad will stick it out to farm up their entire Tier 3 set.

I personally am not stocking up on more crystals than I can reasonably transmute myself before Phase 6. In the past, such one-time use items have not produced much profit when new content was released in WoW Classic. In fact, more than one person has lost a considerable sum to panic selling once they realized so many others made the same plans they did.

If you do plan to stockpile start selling on the Phase 6 announcement. Don’t wait for Phase 6’s actual launch. I always recommend diversifying any investments you make. If you go into Arcanite have some of your gold there and some of it in unrelated markets. You don’t want to lose everything in one bad gamble.

Alchemists should consider how much value they are getting out of their transmutes. On Pagle-Alliance an Arcanite Bar transmute is currently worth ~13 gold. That’s the profit (after fees) from buying a crystal, transmuting, and selling the bar on the AH. Alchemists selling their transmute should keep that in mind when setting a price. Ideally, alchemists should buy the crystal and sell the bar themselves. Less than 50 gold in starting capital is enough to buy transmute mats. After four transmutes you should have enough profit to keep the process self-sustaining. Earning an extra 200 gold (at current Pagle prices) each month for little effort.